27 Dec – St. John Evangelist: “We Must Deny to Protestantism Any Right to Use the Bible, Much More to Interpret It.”

A meditation on the Feast of St John the Evangelist, St Jerome, St Fabiola, and Nicholas, Cardinal Wiseman from the keyboard of Fr Zed.


Today, being the Feast of the Evangelist John, we have a special blessing for wine and other libations.  I wrote about that HERE.  We have this blessing because of an assassination attempt.    There was an attempt on the life of St. John the Evangelist by poisoning.  He blessed the cup and the poison crawled out in the form of a serpent.  You often see St. John depicted this way in art.
St. Jerome says this about the Evangelist.  Priests read this inBreviarium Romanum during Matins.
the

V. Grant, Lord, a blessing.
Benediction. May the Spirit’s fire Divine in our hearts enkindled shine. Amen.
Reading 6
From the Commentary upon the Epistle to the Galatians, by the same author [St. Jerome]
iii. 6.

This is the author of the Fourth Gospel, the visionary of Revelation, the discipline whom Jesus loved best, the one who, though he ran at first, was at the Cross, and to whom the dying Savior entrusted His Mother even as He told her that John was her son. This feast reminds us of the filial relationship priests should have with Mary, which she already has with us and would see deepened.
Another connection through St. John’s Day and Jerome is St. Fabiola, one of the ascetic gang of Roman matrons who were around Jerome while he was in the City and who busied themselves in works of mercy.
that this is the feast of
Fabiola eventually moved to St. Paula’s monastic house in Jerusalem to continue her work near Jerome. She was quite a wealthy widow and is a patroness of widows, divorced people, troubled marriages, victims of domestic abuse and those who suffer because of adultery.  Perhaps we can ask her today to intercede with God for enlightenment of Card. Kasper and … others who are confusing the People of God about the indissolubility of marriage and the sinfulness of infidelity.  There was a famous painting of Fabiola by the French painter Jean-Jacques Henner, which was copied many times before it was lost.  There are many copies. 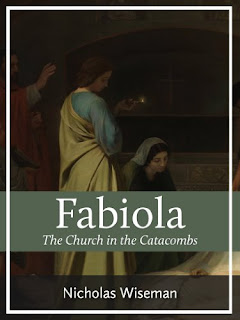 There is a novel about Fabiola called, surprise, Fabiola by Nicholas Wiseman… Cardinal and the first Archbishop of Westminster after the restoration of the hierarchy in England in 1850.
I like this quote from Card. Wiseman (not in Fabiola):

“The doctrine and practice of the Church must not be allowed to be impugned by those who have no claim at all to Scripture, and who can prove neither the canon, its inspiration, nor its primary doctrines, except through that very authority which they are questioning, and through treacherous inconsistency with the principles on which they are interrogating it. When many years ago this ground was boldly adopted, it was charged with being an attempt to throw Protestants into infidelity, and sap the foundations of the Bible. Years of experience, and observation not superficial, have only strengthened our conviction, that this course must be fearlessly pursued. We must deny to Protestantism any right to use the Bible, much more to interpret it. Cruel and unfeeling it may be pronounced by those who understand the strength of our position, and the cogency of the argument; but it is much more charitable than to leave them to the repeated sin of blaspheming God’s Spouse, and trying to undermine the faith of our poor Catholics.” [The Catholic doctrine on the use of the Bible, 1853]

I’m sure that the Evangelist, Jerome and Fabiola would have all been in agreement.
Lift a libation and invoke health today for your loved ones… and confusion to your enemies… on this Feast of St. John.
Posted by Jovan-Marya Weismiller, T.O.Carm. at 14:44