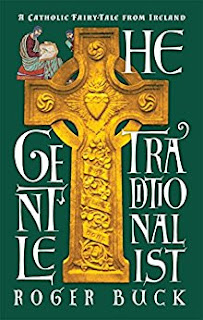 What can I say about this book? Well, here is the review I wrote on Amazon and Goodreads. It was headed 'READ THIS BOOK'!

This book is by an 'online friend' of mine. I've had it on my Kindle for months, but I just started it last night and finished it this evening. I laughed uproariously and I shed tears whilst reading it. I can't recommend it highly enough to anyone who is concerned about the state of the modern world.

But, there is so much more to say!

It is subtitled, 'A Catholic Fairy-Tale From Ireland', and it is, indeed, a modern fairy-tale, but is much more. It is an extended meditation on the state of the world today, how we got to where we are, and what can be done to return sanity to the world.

Set on a snowy St Valentine's Day in the small county town of County Monaghan, also called Monaghan, it takes the form of an extended dialogue between a young man who is having severe relationship problems and 'The Gentle Traditionalist', in which, improbably, a Carlist Colonel named Wilhelmsen, and both Guinness and root-beer figure.

The young man, Geoffrey Peter Luxworthy, has been in a relationship for several years with a young woman, Anna, who has converted to Traditional Catholicism, and is considering whether she has a vocation to a Traditional convent. GPL, as he is referred to in the dialogue, is baffled by her desire to be a nun, which he considers the height of nuttiness. He has proposed to her on the morning of St Valentine's Day, but she has refused to answer, saying that she must go to Dublin to see a priest.

At a loss to know what to do, he decides to drive from the remote farm where they are staying, into Monaghan. On the way, he drives off the road into a ditch, hitting his head rather hard. He then gets to the town when an elderly lady offers him a ride.

Dropped off in the high street, which is deserted because of the weather, he wanders aimlessly for a bit, until he sees a sign over a door which reads, 'The Gentle Traditionalist, Clarifications Provided, Questions Answered, Arguments Asserted, All In The Most Gentle Manner Humanly Possible (Entirely Free of Charge to All Genuine Enquirers)'. Confused, but curious, he enters and discovers yet another sign, 'The Gentle Traditionalist is IN, upstairs on the 3rd floor (Help also provided with Romantic Dilemmas)'.

Curiosity, combined with a desire to warm himself and to dry his boots, leads him to knock. He is greeted by a very large, very old man, who introduces himself as Gilbert Tracy, the Gentle Traditionalist.

GPL then explains his problem. Coming, as he does, from a protestant background, and thoroughly formed by modern, secular, 'liberal' education, he thinks Christianity in general and Catholicism in particular, are frauds, believed only by people completely out of touch with modern civilisation. In the ensuing conversation, GT gently, but not always politely, attempts to disabuse him of this idea.

The dialogue ranges over theology, economics, the media, education, and the Revolution and Counter-Revolution as GT gently explains to GPL that he and Anna actually belong to two different religions. At first, the young man dismisses this as balderdash, but as the day wears on, he begins to see the truth in GT's explanations.

At the end of the day, Geoffrey leaves, only to find Anna in the high street outside GT's flat. Does Anna become a nun? Does Geoffrey become a Catholic? Do they get married? Now, answering those questions would spoil a very touching tale! Buy the book, read it and enjoy it. Tell your friends about it, especially those like Geoffrey, or, better yet, buy them a copy!

Here is a link to the book on Amazon, The Gentle Traditionalist. With Kindle Unlimited, it is, of course, free. Ordinary Kindle users may purchase it for US$6.99. It is available in hard copy, with Prime shipping at US$14.93 for the paperback, and US$24.95 for the hardback.
Posted by Jovan-Marya Weismiller, T.O.Carm. at 14:02