Passing On the Past

As I've mentioned, I grew up on a farm in North East Kansas. About 20 years ago, I was living in the city with my Cuter & Shorter Half and our children, who were young teenagers. We lived just a short drive from the US National Agricultural Center and Hall of Fame, a museum and educational facility in Bonner Springs, Kansas, the C&SH's hometown.

I decided to take the children to the 'Ag Hall' as it's called in the area, to give them an idea of what my life had been like as a boy. I often joke that I didn't grow up in the 1950s and 60s, but much earlier. My family still clung to many of the older ways of the farm.

As I said in my post, The Vagaries of Diet,


I was raised on a farm in Northeast Kansas. We kept cattle, hogs, and chickens. Every year, I helped butcher a steer and a hog. I also got to pluck the feathers of lots of chickens after Mum or my Grandmother chopped their heads off.  Most of the meat was taken into town to the cold storage locker, but Mum and Grandma always canned some beef, parboiling it, adding tallow, and sterilising the jars. That was just in case we got snowed in and couldn't make it to town! We rendered the pork trimmings into lard, and I got to eat a few of the cracklings, the very deep fat fried scraps of meat left after the liquid lard had been pressed out. We stuffed our own sausage in sheep guts we bought at the locker. It was smoked in a 55 gallon drum, and then hung in the 'big pantry', a large walk-in closet/small room off my bed room.

We still had a small patch of corn that we harvested by hand. It was immediately north of the farmstead, and acted as a snow break in the winter, catching the snow that would otherwise drift around the buildings.

Amongst the items in the Ag Hall Museum was a corn shucking hook. It is used to rip the husk off the ear of corn, which you then snap from the husk and throw in the wagon. 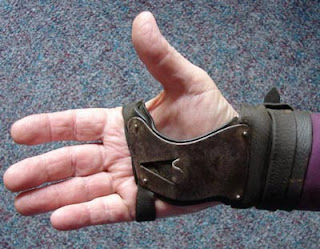 It also exhibited a hand corn planter, which we used to plant the sweet corn in our (very large) garden. It is a device which has two upright, flat boards, hinged together at the bottom by metal nose-pieces. A seed can was attached to one board, and handles were set on the top of both. To use, the handles were held apart, the nose stuck into the ground, and the handles were pushed together to open the bill and released the seed. Other variations existed, but all designs operated on the same principle.

And, occasionally, if we just need a bit of corn shelled, for chicken feed or such, we used a hand cranked corn sheller, which was also on exhibit. 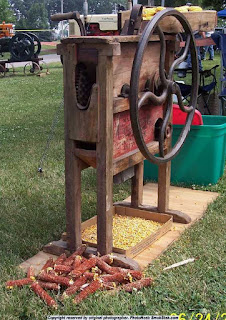 As we walked by each item, I asked the youngsters to guess what it was. Their batting average was .000! I enjoyed explaining each one to them and its uses. I doubt they enjoyed it as much as I did, but I hope they learned something!