Today is the Fourth Day of Christmas. It is also the Feast of the Holy Innocents, all the male children under the age of two, in Bethlehem and its surrounding district, who were killed on the orders of King Herod, in hope of killing the Messias. 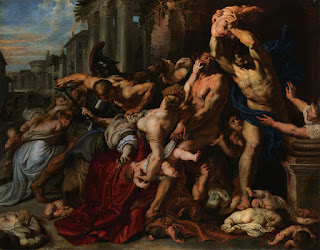 The Massacre of the Innocents, by
Peter Paul Rubens

The record from the Gospel According to St Matthew, Chapter 2,

16 Then Herod perceiving that he was deluded by the wise men, was exceeding angry; and sending killed all the men children that were in Bethlehem, and in all the borders thereof, from two years old and under, according to the time which he had diligently inquired of the wise men.

17 Then was fulfilled that which was spoken by Jeremias the prophet, saying:
18 A voice in Rama was heard, lamentation and great mourning; Rachel bewailing her children, and would not be comforted, because they are not. 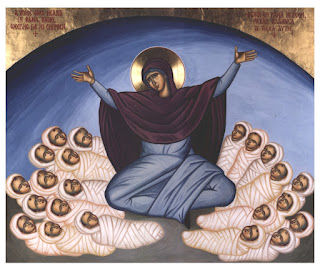 Here is the reading used at Matins today, from the Sermons of St. Augustine, Bishop,

Dearly beloved brethren, today we keep the birthday of those children, who, as we are informed by the Gospel, were massacred by the savage King Herod. Therefore let earth rejoice with exceeding joy, for she is the mother of these heavenly soldiers, and of this numerous host. The love of the vile Herod could never have crowned these blessed ones as hath his hatred. For the Church testifieth by this holy solemnity, that whereas iniquity did specially abound against these little saints, so much the more were heavenly blessings poured out upon them.

Blessed art thou, O Bethlehem in the land of Judah, which hast suffered the cruelty of King Herod in the slaughter of thy children; who art found worthy to offer at once to God a whole white-robed army of guileless martyrs! Surely, it is well to keep their birth-day, even that blessed birthday which gave them from earth to heaven, more blessed than the day that brought them out of their mother's womb. Scarcely had they entered on the life that now is, when they obtained that glorious life which is to come.

We praise the death of other martyrs because it was the crowning act of an undaunted and persistent testimony; but these were crowned at once. He That maketh an end to this present life, gave to them at its very gates that eternal blessedness which we hope for at its close. They whom the wickedness of Herod tore from their mothers' breasts are rightfully called the flowers of martyrdom; hardly had these buds of the Church shown their heads above the soil, in the winter of unbelief, when the frost of persecution nipped them.

Innocent is a not uncommon name in religion. There have been thirteen Popes named Innocent from Pope Innocent I, who reigned from Ad 401 to AD 417 to Pope Innocent XIII, whose reign lasted from AD 1721 to AD 1724. The Orthodox, as well, use the name, as is shown by St Innocent of Alaska, born Ivan Evseyevich Popov. 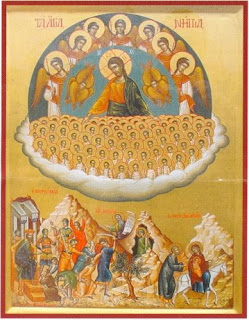 Here is the Coventry Carol for the Feast Day. It dates from the 16th century in Coventry, Englsnd, where it was sung in a mystery play called The Pageant of the Shearmen and Tailors.