St. Therese and the Missions

St Therese is Patroness of Missions, tho' she was never technically a missionary. However, it is the prayers of cloistered nuns that power the missions. 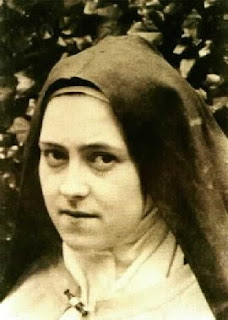 St. Therese of Lisieux had a special affinity with the missions even before she entered the convent. Her autobiography, Story of A Soul, relates her first retreat at an abbey in preparation of her First Communion. She stood out from the rest because she wore the big crucifix her sister Leonie had given her, "which, like the missionaries, I had fastened to my belt." And like most saints, the interpretation of the outward sign was misguided. She had entered the Lisieux Carmel, the saint wanted to go to the new Carmel in Saigon, but knew she would never be able to when she was diagnosed with tuberculosis about a year before she died in 1897 at the age of twenty-four. Pope John Paul II has directed the faithful to use St. Therese as a model for the missions. Hers was a life of intense prayer, which is necessary in any missionary work. As Christians, we must practice charity. Some missionary organizations have de-emphasized the role of bringing the Gospel into their lives, as Jesus exhorted to the Apostles. Recently, the director of a missionary home for orphaned and abandoned boys in Jamaica spoke at a parish. The nun explained the abject poverty and how many parents are abandoning their children at younger ages. Many of the children cared for there are homeless and without discipline. She spoke of the challenges of making them take direction, then teaching them to read, then learn a trade so their own children do not end up in the same boat. She also mentioned that she has learned to trust God to provide for the home and to keep it from closing.

This is all very noble, but she failed to mention whether these boys learn to trust God, or if they ever hear of Him. Do they learn, in the time that they learn and live there, about Jesus and Christian morality? Do they have the chance of not only living a more materially rich life, but also a spiritually rich one? Maybe they do learn these things. If so, why was not it deemed important enough to mention? After all, she had an audience of church-going Catholics. This oversight could be more easily excused if it were an isolated incident. Sadly, that is not the case. It is more pathetic that the people sitting in the pews do not notice. The Holy Father has called for new missionary zeal in the Catholic Church. In his message of the World Day for the Missions, which will be observed October 19, Pope John Paul II does point out that not all Christians are called to become missionaries in the traditional sense. However, the Second Vatican Council states that missions are "the special undertakings in which preachers of the Gospel, sent by the Church and going into the whole world, carry out the work of preaching the Gospel and implanting the Church among people who do not yet believe in Christ" (Ad gentes, no. 6). St. Therese participated in missionary work through her own prayer and sacrifice at the Carmel convent in Lisieux. She even "adopted" two missionary priests for this purpose, with all her good works and self-said "poor merits" offered for their work. This a large reason why the Little Flower is the patroness of the missions. Indeed, prayer is the "stone foundation" for any missionary work to truly succeed. She engaged in this work in the Martin home while growing up, in her work in Carmel, and while she lay dying in an infirmary bed. All of us can do this according to our own state of life. We need to see Jesus in everyone we meet, including the lady a few pews behind us singing terribly off key.

We also need to carry out mission work in today's pagan world. As the Holy Father said in his catechesis on missions, "There is the consideration that in the Churches of the first evangelization, from which came many missionaries working in Ômission countries', there is an increasing awareness that their territory is becoming Ôa mission land' requiring a Ônew evangelization'" (General audience May 3, 1995, no. 3). This is true in several dioceses, particularly in the United States, where the Faith has been lost. This can be more challenging missionary activity than going to a land where no one has ever heard of Jesus. People who have heard the Gospel, but have been misled about the Church's teachings, can be just as or more tenacious about holding on to their beliefs. And the religious relativism prevalent in today's world has many people feeling comfortable in believing and practicing "whatever" in the name of tolerance. Many children exposed to catechetical programs in the past 30 years have not received the fullness of the Catholic Faith, which makes it easier for them to turn away from it. As Pope John XXIII stated in his encyclical Princeps Pastorum in 1959, "The sheer number of Christians means little if they lack virtue; that is, if, while enjoying the name of Catholic, they do not stand firm in their determination." After baptism, they need solid catechesis.

But we cannot give up part of Christian teaching in a particular culture so the truth may be more easily accepted. And it is impossible to embrace customs that are in direct conflict with the Gospel. As St. Therese and every other saint has shown, it is not enough to believe that Jesus was a "good guy." Her simplicity and desire to do everything, no matter how little, totally in union with God's will shows us the way to reach eternal life.
Posted by Jovan-Marya Weismiller, T.O.Carm. at 06:00