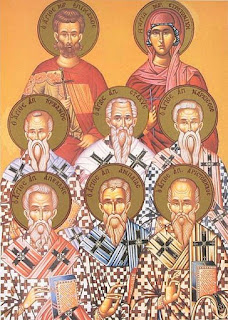 Saint Stachys, one of the Seventy Apostles, was ordained as Bishop of Byzantium by Saint Andrew (November 30). He founded a church at Argyropolis, and many people gathered there to hear him preach. He was a good shepherd to his flock, zealously proclaiming the Gospel of Christ, converting many to the true Faith, and laboring tirelessly for their salvation for sixteen years. He departed to the Lord in peace.

Saint Nárcissus was appointed as Bishop of Athens by the Apostle Philip. He was tortured and put to death by the idol-worshippers because of his zeal in proclaiming the truth of the Gospel.

Saint Apellēs was the Bishop of Herakleia, and he brought many to the Christian Faith.

Saint Aristóboulos, one of the Seventy Apostles, was the brother of Saint Barnabas (June 11) and proclaimed the Gospel in Britain, where he died in peace. He is also commemorated on March 16, but on March 15 in Greek usage.
Troparion — Tone 5

(Podoben: “Come, let us worship the Word...“)
Let us acclaim Stachys, Apellēs, Amplίas, Urban, Nárcissus, and Aristóboulos as a six-stringed harp of the Spirit, / singing of God's marvellous gifts to mankind. / Together, as divine Apostles, / they ask that grace may be granted to our souls
Kontakion — Tone 8

(Podoben: “As the first fruits of our nature...“)
Fittingly, let us praise those sacred treasures of the All-Holy Spirit and rays of the Sun of Glory, / the wise Apostles Apellēs, Urban, Aristóboulos, Amplίas, Nárcissus, and Stakhys, / who received grace from our God.
✠✠✠✠✠ 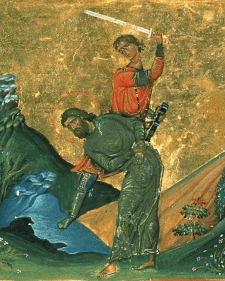 The Holy Martyr Epίmakhos of Alexandria was a native of Egypt. For a long time, he lived in seclusion on Mount Pēlousium. When he learned that Christians were being persecuted in Alexandria, Saint Epίmakhos entered the city and destroyed some pagan idols, declaring that he too was a Christian. Apellianos, the eparch of Alexandria, ordered him to sacrifice to the idols, and when the Saint refused to do this, he commanded that he be tortured.

Among those who witnessed his suffering was a woman who was blind in one eye. A drop of the Martyr's blood fell into her eye and she received her sight. Thus, the woman came to believe in Christ. After enduring many fierce torments, the Saint was beheaded with a sword.

The Holy Martyr Epίmakhos is also commemorated on March 11 (the transfer of his relics).
Troparion — Tone 4

Your holy martyr Epίmakhos, O Lord, / through his suffering has received an incorruptible crown from You, our God. / For having Your strength, he laid low his adversaries, / and shattered the powerless boldness of demons. / Through his intercessions, save our souls.
Kontakion — Tone 3

(Podoben: “Today the Virgin...”)
Of your own accord you went to contend for the true Faith, O Epίmakhos, / and courageously you cried out to the impious: / "I have come to strive in a contest for the truth, / and to destroy the idols of perdition." / And when you were beheaded, you received a crown of righteousness.
Posted by Jovan-Marya Weismiller, T.O.Carm. at 00:06