Constantine’s Vision and the Theory of the Sun

How rationalists, atheists, and some modernists try to explain away the miraculous vision St Constantine (21 May) saw1710 years ago today. 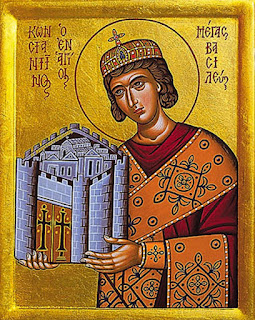 History is still not settled on just what the Roman emperor saw in the sky.

There are several theories about what constituted the “Vision of Constantine” just the before the Battle of Milvian Bridge. But whatever the true explanation is, the event left us with a symbol of Christ that has been used ever since.

According to the Encyclopaedia Britannica, Constantine, who was the first Roman emperor to profess Christianity, attributed his success to his conversion and God’s support.

According to the Christian apologist Lactantius, Constantine fought the Battle of the Milvian Bridge on October 28, 312, in the name of the Christian God, having received instructions in a dream to paint the monogram of Christ on his troops’ shields. That monogram is known as the chi-rho, a combination of the first two letters of the Greek name Christos.

The encyclopedia says that a somewhat different account, which Constantine gave late in life to the bishop Eusebius, speaks of a vision seen by Constantine during the campaign against Maxentius. In several writings, Eusebius details how the Christian sign appeared in the sky with the words, “In this sign, conquer.”

But J.R. Palanque et al, in The Church in the Christian Roman Empire, point out some problems with Eusebius. In one place, the bishop refers to rival emperor Licinius as a Christian — he never was one. The military standard, which is minutely described, “could not have been made in the course of the lightning campaign of 312.”

The Britannica says that “a religious experience on the march from Gaul is suggested also by a pagan orator, who in a speech of 310 referred to a vision of Apollo received by Constantine at a shrine in Gaul.”

Steve Weidenkopf, author of Timeless: A History of the Catholic Church, notes that Constantine was not a Christian prior to the Battle of Milvian Bridge, but was aware of Christianity and probably had Christians in his army.

Constantine’s father, Constantius, one of the four emperors of the Tetrarchy, “had not vigorously enforced Diocletian’s persecution edicts in the west, so Constantine was, at the least, not ill disposed to the Church,” Weidenkopf writes.

Some believe that the vision was actually a natural phenomenon. According to the website Imperium Romanum, British historian A.H.M. Jones and others contest that the “vision” was a “halo” — the Greek word halos means solar disk — which occurs due to the refraction of light in a cloud containing ice crystals.

Robert Louis Wilken in The First Thousand Years describes the phenomenon as the sun being “surrounded by a circle of light that has two lesser suns on a horizontal axis to the right and left. When all three are visible the points of light extending out from the center form an image that resembles a cross in a circle.”

Weidenkopf notes that it is believed that the pre-Christian Constantine had a strong devotion to only one pagan god, Sol, “making him already semi-monotheistic in his religious views.”

“Ultimately, probably under the influence of Christian advisers,” Imperium Romanum concluded, “he decided that the sign came not from Sol Invictus, but from Christ.”

Not from the sun, in other words, but from the Son.