Our Lady's Coat of Arms

The fascinating story of the  Order of the Blessed Virgin Mary for the Ransom of Captives, founded to ransom slaves taken by the Muslims. 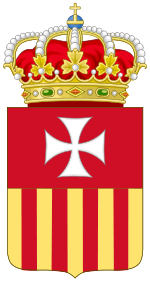 The Mother of God graces America's Hispanic Southwest in a multitude of glorious guises. While Our Lady of Guadalupe is certainly , countless other images color Marian devotions in southern Colorado and northern New Mexico, and their heritage stems from medieval Spain.

But among all the Old World Madonnas revered, only one counts among her accessories a royal coat of arms. , or "Our Lady of Mercy," emerges from the storybook era of Marco Polo and Don Quixote, and her 13th century history rivals Hollywood for intrigue, romance and adventure.

In the 1200s, the Moors were very efficiently rampaging through Spain. As they advanced, the Spanish were simultaneously penetrating Arab territories, bent upon converting "infidels" to Christianity and defending Crusader strongholds in the Holy Land.

At home and abroad, then, from the early 13th century until near the close of the 18th century, the Spanish faced capture and imprisonment. If they refused to renounce their Christianity, they were almost certainly marked for torture and death.

While some Spanish religious orders of a military nature (peculiar to that time and place) were dedicated to nursing and giving comfort to the captives, a totally unique and dramatic approach to their relief was effected by the Virgin Mary.

In a vision to a young nobleman, Mary urged the formation of a military fraternity that would rescue prisoners by means of ransom.

St. Peter Nolasco (c. 1189-1258) was born in France, educated in Spain and, through the fortunes of war, was eventually appointed tutor to King James of Aragon. From childhood, he had exhibited a unique spirituality and disregard for the luxurious environment to which he was born.

He habitually gave lavishly to the poor, and fashioned for himself a very austere and prayerful lifestyle. His vision of the Blessed Mother in 1218 not only catapulted him into the unlikely role of sword-bearing leader, but it would also touch the lives and times of future centuries of Spanish-speaking peoples- wherever they were destined to plant and preserve the faith.

After securing the required sanction of King James of Aragon, Nolasco initiated the military Order of the Blessed Virgin Mary for the Ransom of Captives (OdeM.) in 1218.

The order originally attracted young noblemen whose heritage equipped them to practically address the matter of ransom. They were known as "knights," and it was only later that clergy were represented in the ranks.

Although he was the first commander general of the order, Nolasco was not himself a priest, nor did he ever become one. It was 100 years until a papal order required that at least the leader of the community must have received the Sacrament of Holy Orders.

The founder required of himself and his followers a special vow in addition to the usual three-to devote their "whole substance and very liberty to the ransoming of slaves," even to the point of acting as hostages in order to free others.

According to records, the Order of the Blessed Virgin Mary for the Ransom of Captives accomplished approximately 70,000 rescues-some 2,700 during the founder's lifetime.

The order elected a habit of white, signifying innocence. Some histories claim that Mary provided such guidance during her appearance to Nolasco. An enthusiastic King James authorized the members to wear- emblazoned on their breasts and long scapulars- his own distinguished arms -of Aragon.

The Maltese Cross is its most striking component-a unique cruciform that commemorates Malta's steadfast defense against the Turks.

Papally confirmed in 1235, the fraternity became popularly known as the Order of Our Lady of Mercy, or the Mercedarians. It rapidly spread throughout Western Europe, and some of its friars eventually sailed with Columbus to America.

Those who later accompanied the conquistadors' relentless march through the New World and New Spain were extremely vigorous in the conversion of indigenous peoples.

Our Lady of Mercy is frequently portrayed in a queenly stance, extending a generous mantle to either side. Huddled beneath its protection is a group of the faithful.

Shown here is a less common The Madonna format is embellished with a base of supplicants-captives begging Mary's intercession. This glowing rendition, by Manuel de Samaniego (1767- 1824), can be admired today in a historic Mercedarian church in Quito, Ecuador.

The ethereal luminance of the background smacks of the influence of the Spanish painter Bartolome Esteban Murillo (1617-82), whose popular Marian prints were provided as models to Indian and mestizo artists.

The bold colors and lavish embellishment with gilt brocade are characteristic of the paintings accomplished in the great colonial art centers of Peru, Ecuador and Bolivia.

However varied her portrayals may be, is immediately recognizable. Without exception, on her breast and often repeated on the scapular extended from her hand, is the distinctive royal signature of the Mercedarian order: the splendid arms of the King of Aragon.

What an incredible journey in time and place from medieval Spain and Africa to the missions of the New World and New Spain, and hence to the American Southwest, where Our Lady for the Ransom of Captives continues to respond to prayers murmured in "the language of the angels."

The Mercedarians remain an active order, principally in Spain and Latin America. Lacking a military mission, they have long since turned to education and social causes.

Only a bit of chain attached to the belt remains as a reminder of its ancient accommodation of swords, but the order persists in its original concern for captives: they are often prison chaplains.

Nolasco died in 1258, after a lifetime dedicated not only to the rescue of Spanish captives, but to the simultaneous and massive conversion of Moors to Christianity. Countless miracles are attributed to his relics, and he was canonized in 1628.

St. Peter Nolasco, who obviously relished a military ambiance, must be delighted with the reputation and honors that his Lady of Mercy has acquired -especially in Peru. In 1615, she was credited with saving Lima from an invasion by Dutch pirate ships.

Not surprisingly, she became patron of the country. General San Martin, Latin America's great revolutionary leader and liberator of Peru, promoted her to Marshal of the Peruvian Army in 1823.

In 1921, its ancient Spanish statue of Our Lady of Mercy was formally crowned in an elaborate ceremony. On Sept. 24, the anniversary of that coronation, the president of Peru and top officials of all the armed forces stand tall before Our Lady for the Ransom of Captives.

The dignitaries wear full military regalia, which in Latin American nations are extraordinarily "spiffy." It isn't difficult to imagine the figure of St. Nolasco there among them-sword at his side, proudly displaying on his white habit the ancient arms of the king of Aragon, respectfully waiting for his Lady to address her commander general.