Today is the Feasts of the Holy Martyrs Terentius and Neonila, of Our Venerable Father Stephen of Saint Savva Monastery, Composer of Canons, and of the Great Martyr Paraskevḗ, of Iconium.
✠✠✠✠✠ 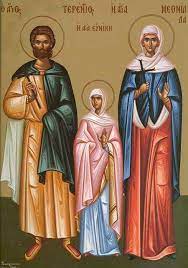 Saint Terence was from Syria and suffered for Christ with his wife Neonila and their seven children Sabelus, Photius, Theodoulus, Vele, Hierax, Nitus, and Eunice. They were denounced as Christians and brought before the authorities for interrogation.
The saints confessed Christ and mocked the pagan gods, even as their sides were raked with iron hooks. Vinegar was poured into their wounds, which were then set afire. The saints encouraged one another and prayed to God to help them. He sent angels to free them from their bonds and to heal their wounds.

Then the saints were thrown to the wild beasts, who became gentle and did not harm them. Afterwards, they were thrown into a cauldron filled with hot pitch, but they were not burned. Seeing that nothing could harm the saints, the pagans beheaded them.
Troparion — Tone 3

Bound together by natural bonds / and clothed with the might of faith, / you walked the path of martyrdom with your seven children. / O holy Martyrs Terence and Neonilla, / pray that those who honour your contest may receive forgiveness of their sins.
Kontakion — Tone 4

(Podoben: “As You were voluntarily raised...”)
The universe rejoices at the honourable commemoration of the martyrs: / Terence the most-wise, his wife Neonila, and their children. / Therefore, let us hasten that we may receive healing; / for he has received grace from the Holy Spirit / to cure the sicknesses and ills of our souls.
✠✠✠✠✠ 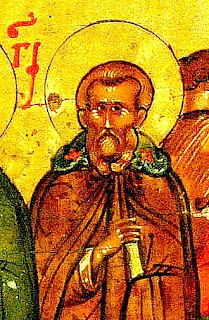 Saint Stephen the Hymnographer of Saint Savva Monastery, lived the ascetic life at the Lavra of Saint Savva in Palestine. He and Andrew the Blind were among the first to compose hymns (idiomela) for the period between the Publican and Pharisee and Palm Sunday. He does not appear to be the same Saint Stephen who is celebrated on July 13.
Troparion — Tone 8

Champion of the orthodox Catholic Faith, teacher of purity and of true worship, / enlightener of the universe and adornment of hierarchs: / all-wise father Stephen, your teachings have gleamed with light upon all things. / Intercede before Christ God to save our souls.
Kontakion — Tone 4

(Podoben: “As You were voluntarily raised...”)
You planted a garden of the virtues, most glorious one, / and watered it with the streams of your tears. / Since you have received the tree of life, O Stephen, / save your flock from corruption by your prayers. / Deliver from all evil / all of those who fervently honour you, O wise one, / for we have acquired you as a great intercessor through faith and love.
✠✠✠✠✠ 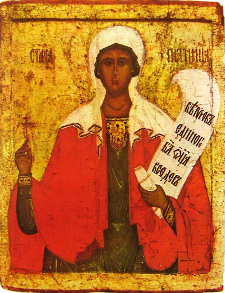 The Great Martyr Paraskevḗ of Iconium, lived during the third century in a rich and pious family. The parents of the saint especially reverenced Friday, the day of the Passion of the Lord, and therefore they called their daughter Paraskevḗ. This name, Paraskevḗ, also means Friday.

Young Paraskevḗ with all her heart loved the purity and the loftiness of the virginal life, and she took a vow of celibacy. She wanted to devote all her life to God and to enlighten pagans with the light of Christ.

Because of her confession of the Catholic Faith, the pagans in a frenzy seized her and brought her to the city prefect. They demanded that she offer unholy sacrifice to the pagan idols. With a steady heart, and trusting in God, the saint refused this demand. For this, she underwent great torments: after stripping her, they tied her to a tree and beat her with rods. Then the torturers raked her pure body with iron claws. Finally, they threw her into prison, exhausted by the torture and lacerated to the bone. But God did not forsake the holy sufferer, and miraculously healed her wounds. Not heeding this divine miracle, the executioners continued with their torture of Saint Paraskevḗ, and finally, they cut off her head.

Saint Paraskevḗ has always enjoyed a special love and veneration among the Eastern Catholic peoples. Many pious customs and observances are associated with her. In the ancient Russian accounts of the Saints’ Lives, the name of the Great Martyr is inscribed as: “Saint Paraskevḗ, also called Piatnitsa (in Russian: Friday).” Churches dedicated to Saint Paraskevḗ in antiquity were given the name Piatnitsa. Small wayside chapels in Rus' received the name Piatnitsa. The simple Russian people called the Martyr Paraskevḗ variously Piatnitsa, Piatina, Petka.

Icons of Saint Paraskevḗ were especially venerated and embellished by the faithful. Russian iconographers usually depicted the martyr as an austere ascetic, tall of stature, with a radiant crown upon her head. Icons of the saint guard pious and happy households. By Church belief, Saint Paraskevḗ is the protectress of fields and cattle. Therefore, on her Feastday, it was the custom to bring fruit to church to be blessed. These blessed objects were kept until the following year. Moreover, Saint Paraskevḗ is invoked for the protection of cattle from disease. She is also a healer of people from grievous illnesses of both body and soul.
Troparion — Tone 5

Wise and praiseworthy martyr of Christ Paraskevḗ, / you conquered the devil by accepting courage and rejecting feminine weakness. / You shamed your torturer by crying out: / Come rend my body with your sword and burn it with fire, / for I go rejoicing to Christ my bridegroom. / By her prayers, O Christ God, save our souls.
Posted by Jovan-Marya Weismiller, T.O.Carm. at 00:06