Today is the Feast of the Hieromartyr Zenobius and the Holy Martyr Zenobia, His Sister.
✠✠✠✠✠ 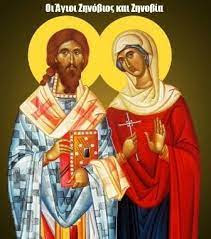 The Hieromartyr Zenobius, Bishop of Aegea, and his sister Zenobia suffered a martyr’s death in the year 285 in Cilicia. From childhood they were raised in the holy Christian Faith by their parents, and they led pious and chaste lives. In their mature years, shunning the love of money, they distributed away their inherited wealth giving it to the poor. For his beneficence and holy life the Lord rewarded Zenobius with the gift of healing various maladies. He was also chosen bishop of a Christian community in Cilicia.

As bishop, Saint Zenobius zealously spread the Christian Faith among the pagans. When the emperor Diocletian (284-305) began a persecution against Christians, Bishop Zenobius was the first one arrested and brought to trial to the governor Licius. “I shall only speak briefly with you,” said Licius to the saint, “for I propose to grant you life if you worship our gods, or death, if you do not.” The saint answered, “This present life without Christ is death. It is better that I prepare to endure the present torment for my Creator, and then with Him live eternally, than to renounce Him for the sake of the present life, and then be tormented eternally in Hades.”

By order of Licius, they nailed him to a cross and began the torture. The bishop’s sister, seeing him suffering, wanted to stop it. She bravely confessed her own faith in Christ before the governor, therefore, she also was tortured.

By the power of the Lord they remained alive after being placed on a red-hot iron bed, and then in a boiling kettle. The saints were then beheaded. The priest Hermogenes secretly buried the bodies of the martyrs in a single grave.

Saint Zenobius is invoked by those suffering from breast cancer.
Troparion — Tone 4

As brother and sister united in godliness together you struggled in the contest, Zenobius and Zenobia. / You received incorruptible crowns / and unending glory / and shine forth with the grace of healing upon those in the world.
Kontakion — Tone 8

Let us honour with inspired hymns the two martyrs for truth: / The preachers of true devotion, Zenobius and Zenobia; as brother and sister they lived and suffered / together and through martyrdom received their incorruptible crowns.
Posted by Jovan-Marya Weismiller, T.O.Carm. at 00:06