This intervention gave rise to the epic tale of the Battle of Camarón and the hand of Capitaine Jean Danjou, of the Légion étrangère! 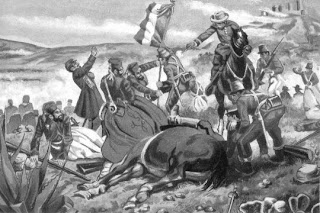 The French intervention in Mexico began in January of 1862 just after the arrival of Spanish and British troops in Veracruz. This initial commitment consisted of 2,000 French marines and 600 Zouaves from the French Army of Africa. With the perpetual chaos in Mexico about the only revenues the government could count on were the import tariffs collected at the coast such as the principal port of Veracruz. However, the low lying coastal areas of Mexico are notorious hotbeds for disease and it is no wonder that Mexican President Benito Juarez took no action against the foreign presence and allowed sickness to decimate their ranks for him. By the middle of the following month the Spanish and British had had enough and after receiving new promises from Juarez pulled their troops out. The French, however, remained and had more far reaching goals in mind.

The French Imperial Army was strengthened by some 3,000 men under the command of the Brigadier General Ferdinand Latrille, Comte de Lorencez. On the same day that the other powers pulled out the French Empire effectively declared war on the liberal republican regime in Mexico City. After advancing to Cordoba General Lorencez issued a pronouncement which stated that France would pacify the country, restore order and he actively called for the recently defeated conservative faction to launch a counterrevolution. The French army was, at that time, fresh from victories in Africa, Italy and the Crimea and was considered possibly the best in the world. Throughout the length of the French intervention in Mexico the troops involved by the French Imperial Army included elements from 6 line infantry regiments, 3 zouave regiments, 4 light infantry battalions, squadrons from 3 cavalry regiments, 6 artillery batteries, 5 companies of engineers, 1 supply train squadron, colonial troops from Martinique, Algeria and the Foreign Legion, 1 marine regiment, 1 battalion of sailors and 1 battery of naval (marine) artillery. According to the treaty signed with then Archduke Maximilian of Austria the French Foreign Legion was supposed to remain in Mexico for 6 years even after all other French forces had withdrawn to form a corps around which the new Imperial Mexican Army could be built.

To be sure, the French Imperial Army was a grand spectacle and carried an illustrious reputation with them as they began the march inland to Mexico City. However, this may have worked against them by causing a severe case of overconfidence. This was realized on the famous battle of the fifth of May when General Lorencez launched a frontal assault on the liberal stronghold at Puebla defended by Mexican troops under General Ignacio Zaragoza. The French were soundly repulsed in a bloody battle celebrated as a national holiday ever since and General Lorencez was forced to withdraw back to Orizaba to lick his wounds and wait for reinforcements. Emperor Louis Napoleon of France responded by increasing the size of the French forces in Mexico to 28,000 and gave the top command to General Elie Frederic Forey. As the French prepared to renew their advance Forey was most concerned with his long supply lines from Veracruz. To keep these lines open he entrusted their defense to the Foreign Legion and a battalion of Sudanese troops provided by the Khedive of Egypt. It was thought these African soldiers would be better able to resist the disease-ridden climate on the coast. Whether that was true is debatable but they earned a reputation for discipline, good order and for considerable cruelty toward the local populace.

After the debacle at Puebla it seemed that the French army began to take the whole enterprise more seriously. Many officers even adopted a more native appearance, in typical French style, wearing their coats open with wide sashes and large sombreros on their heads to shield them from the tropical sun. They also made use of allied Mexican forces such as the conservative troops under the fearsome General Leonardo Marquez who won a smashing victory at the battle of San Lorenzo in March as the French moved up to take Puebla again, this time by siege. This time, however, it was the Mexican republicans who made a stupendous mistake. Puebla was the only really half-way defensible place on the road to Mexico City and Juarez decided to gamble everything on holding Puebla despite the fact that the French were better trained, better disciplined, better armed and more experienced that his own forces and, despite the earlier Mexican victory there, in any face-to-face fight between the French and Mexicans the smart money would be on the French army. Nowhere was this more evident than in a little battle along the French line of supply that may not be as widely celebrated as Cinco de Mayo but is actually an even more remarkable battle and is still celebrated today as the official holiday of the French Foreign Legion. 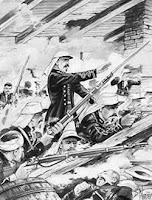 The battle revolved around a French wagon train that was taking a payroll of three million in gold from Veracruz to the French forces at Puebla. The liberals quickly sent a force of republican cavalry and militia to grab the gold and a company of the Foreign Legion was dispatched to intercept them. The two sides met at the hacienda of Camaron on April 30, 1863 where Captain Jean Danjou and 62 legionnaires confronted 2,000 Juaristas. The legionnaires repulsed several cavalry charges after being caught in the open before barricading themselves in the nearby hacienda where they repelled attack after attack inflicting heavy losses on the Mexican republicans. After almost literally fighting to the death the legionnaires were overwhelmed and forced to surrender with only five of the original 62 still alive. This was a stunning example of the tenacity and effectiveness of the French Imperial forces and demonstrated why it was a good idea for the Mexican republicans to avoid formal battles with them considering the trouble they had defeating 62 men with 2,000 at their disposal.

Given that, it was not surprising that after two months under siege the Mexican republicans at Puebla surrendered on April 17, effectively clearing the way to Mexico City. Juarez, for his part, did not even try to defend the city and evacuated his government to San Luis Potosi and a week later General Forey and the French army marched into Mexico City and began establishing the conservative junta that would direct national affairs until a new government could be formed. It was this junta that eventually gave way to the triumvirate that invited Archduke Maximilian of Austria to become Emperor of Mexico. However, Napoleon III was bothered by the fact that his top commander, General Forey, seemed to have lost faith in the expedition and was extremely critical of the situation on the ground and the long term prospects for success. However, as he could hardly punish such a successful commander the Emperor decided to kick him upstairs by promoting him to the rank of Marshal of France, recalling him and replacing him with one of his divisional commanders General Francois Achille de Bazaine.

To be concluded in Part II...