Sadly, yet another horrifying 'wreckovation' of a beautiful old Church. But it's all in the 'Spirit of Vatican II', right? So it's OK. 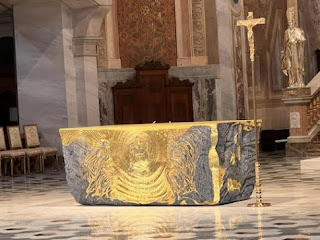 The whole world witnessed the mighty sacred pageantry of Queen Elizabeth II's funeral rite, which lasted a full 12 days and concluded in the presence of 2 million subjects and people who came from all over to bid farewell to the Queen, who was delivered by Anglican officiants strictly dressed in mourning (unlike the modern Church of Rome in its funeral liturgies), in solemn and majestic form, to her eternal rest, blatantly displaying Britain's traditional monarchical-style identity with its rites, symbols, banners, and hymns.
In contrast, four days before the Queen's death, on Sept. 4, in a desolately bare St. Peter's Square, a Roman Pontiff of Holy Mother Church, John Paul I, was beatified with little fanfare. The exalted hierarchs of the Church -- who have been fighting for decades the central rite of Catholic identity, the original Holy Mass, by replacing it with a surrogate, a remake that no longer communicates the original doctrine of the Gospels with inherent pride of identity in the profession of the Faith -- continue in the "assisted suicide" of this increasingly less credible, groping human Church, full of confusion and empty seminaries.
In spite of all the theological, liturgical, and pastoral degradation, the obstinacy is stubborn and no self-criticism, no amendment, no forgiveness is asked of God and the faithful for yielding to the winds of the world.On the contrary, many bishops gloat in the media as they further emancipate themselves, leaving poor souls and their own clergy in disarray. Every now and then some priest, burdened by socio-pastoral, administrative, bureaucratic commitments and existential discomfort, communicates to his bishop his desire to "divorce" from the Church, or asks for a sabbatical year of reflection -- a prelude to abandoning the cassock he does not wear.
Sometimes, however, there are reactions. Many faithful, thirsting for eternal certainties and divine beauty, rose up against the new sanctuary that the Bishop of Vigevano, Maurizio Gervasoni, had commissioned in 2019 from Emiliano Viscardi, a set designer from the Academy of Fine Arts of Brera, which was publicly unveiled on September 17 in all its hideous display in the magnificent Cathedral of Sant'Ambrogio in Vigevano.The "Corriere della Sera" wrote on the same day that the bishop "chose Viscardi to leave to posterity, with these works, a trace of his passage to the top of the diocese," and diocesan spokesman Fr. Emilio Pastormerlo told the same newspaper, "The new episcopal chair, placed at the center of the apse, allows it to conform to the dictates of Vatican Council II. Sixty years later, finally, in the Cathedral of Vigevano too, it is in the center, in axis with the plan of the building. Before it was to the right of the faithful, and before that to the left."Actually, the new episcopal chair in the new presbytery is worthy of the set design of a science fiction movie of the 1960s and 1970s. But we must admit, however, that such a set-up conforms well to the counterfeit liturgy that has replaced the original brand, the traditional Mass. 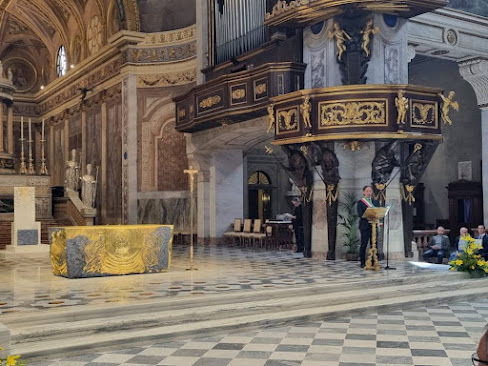 In spite of the most basic and logical directives of the sacrosanct preservation of Fine Arts, the people in charge have allowed themselves to dismantle, with true anti-liturgical and anti-artistic fury, the former presbytery of the Cathedral, consecrated on April 24, 1612. On November 26, it will be none other than Cardinal Pietro Parolin, Secretary of State, with the participation of Cardinal Oscar Cantoni and the other Lombard bishops, who will consecrate the ugly new altar: an 8-ton block of Carrara marble, crudely crafted by Viscardi and installed as a huge disfigurement, as an unacceptable stunt, in a context of seventeenth-century furnishings.
It is not Faith that animates these dastardly projects, with a decidedly profane taste, but a secularized and, therefore, secularist plan called "Integrated Historic-Artistic Paths" (!), which has as its goal, as Bishop Gervasoni stated, the desire that "the community may experience these works as an important cultural moment and that, with the Christian community and civil society, a heritage may be enhanced that reveals to us our identity."If one thinks of promoting and enhancing Christian identity with an altar, a bishop's seat, an ambo, and an Easter candle holder such as those proposed in this cathedral, the purpose is destined to founder miserably. 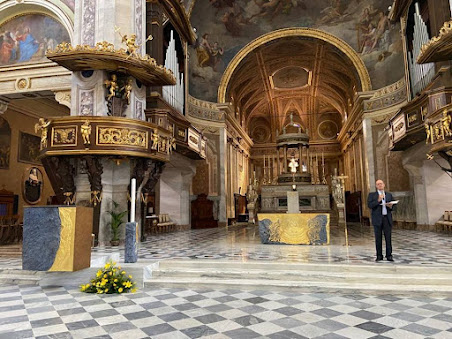 The idea is part of wanting to support the development of the territory according to the intentions of the Cariplo Foundation, which has offered the diocese, for these "artistic" interventions, a contribution of 1 million euros out of an estimated cost of even about 2.7 million, as reported by Agenzia Sir on April 11, 2017. Four cultural routes are planned: the Cathedral, the Treasure Museum, the Library, and the Diocesan Historical Archives. Consider that the Facebook announcement of the altar consecration, under the profile The Tesero Routes - Integrated Artistic Itineraries, is completely overlooked and among the few visitors, there is clear dissent and controversy.
Those who have so far seen -- and certainly not admired! -- the new sanctuary complex, pictures of which are bouncing around in the media, with the refectory table (for such it is, in a decidedly Protestant conception), can only take note of the situation to which the majority of the pastors of the Church have succumbed. As these disasters are made more widely known, they accomplish nothing but to fill more and more pews, with young families, at the original Mass, in those churches where it continues to be offered, albeit persecuted by the very people who support the so-called "liturgical adjustments." Denouncing and opposing such havoc is a duty of every good Catholic. 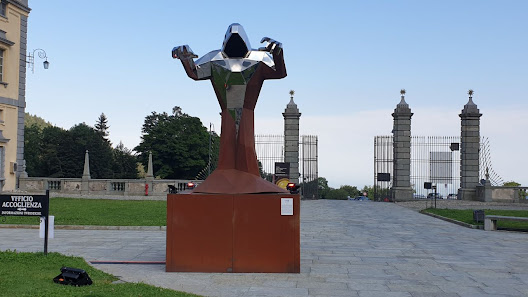 Another strong reaction, from art critics, came with the exhibition set up, from July 2 to Sept. 18 this year, at the Sanctuary of the Black Madonna in Oropa, besieged and desecrated by the contemporary art of Daniele Basso, but welcomed by the rector, Fr. Michele Berchi, pleased with the steel Belfagor, called "Boogeyman." who welcomed pilgrims and visitors to the entrance plaza of the shrine, just a few meters from the ancient church, where the Marian wooden statue of St. Eusebius, the great fifth-century bishop of Vercelli, stalwart defender of St. Athanasius, firm supporter of the doctrine of the Council of Nicaea, and strict opponent of the Arian heretics, is kept.
(Source in Italian)
Posted by Jovan-Marya Weismiller, T.O.Carm. at 16:41