Lesser-Known Facts About the Incomparable Saint Thérèse of Lisieux

Today is the Feast of St Thérèse of the Child Jesus and the Holy Face (Thérèse de l'Enfant Jésus et de la Sainte Face) of the Order of Discalced Carmelites. 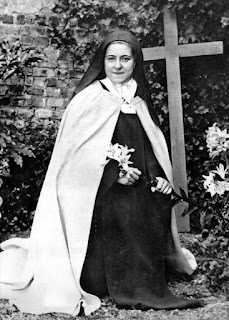 By laying bare her soul and all its pains for us, the Little Flower has become the patron saint of practically every human difficulty.

Marie Françoise-Thérèse Martin, the Little Flower, Doctor of the Church—whatever you call her, Saint Thérèse of Lisieux is one of the most popular Catholic saints in the world. If a given Catholic church has any statues of saints at all, Saint Thérèse is probably depicted by one of those statues.

Because of Thérèse’s popularity, most Catholics know the basic outlines of her life story.

Thérèse was born in 1873 in Alençon, France, into a middle class, devout family. Her mother died of breast cancer when she was only four years old, but she was raised by her loving father and four older sisters. Thérèse recognized God’s call to religious life when she was still a teenager, and she entered the Carmelite monastery of Lisieux when she was only fifteen years old. She became a Carmelite nun and spent the rest of her short life in that monastery until her death from tuberculosis at the age of twenty-four. Her autobiography was published posthumously, and innumerable Catholics have called upon her to fulfill her deathbed promise, that is, that she would “send down a shower of roses from the heavens” to those who asked for her intercession.

What more is there to say about a woman whose autobiography has been a bestseller since a few years after her death in 1897?

One of the best-kept secrets about Thérèse is that her autobiography is not the only document that was examined during her canonization process. Her poems, plays, prayers, and letters, as well as records of the final conversations she had with other nuns before her death, were all studied and are now available in print. Her letters to family members show her loving concern for them, as well as her humility, cheerfulness, intelligence, and, yes, her holiness.

Would your personal letters prove to the pope that you were a saint? Pope Pius XI must have been convinced because he approved Thérèse’s canonization after a mere twenty-eight years (not the standard fifty years) following her death.

It is tempting to think that Thérèse’s status as a saint was preordained given the fact that both her parents lived blameless lives and have recently been canonized as well. But there have been plenty of scoundrels in holy Catholic families over the centuries, and faithful parents do not always produce faithful children. Louis and Zelie Martin, however, unquestionably prepared their daughters well to become faithful Catholics as adults, so well that all five became nuns. The canonization process for another Martin daughter, Léonie, was introduced in 2015.

Thérèse died of an infectious disease that is now treatable and preventable, although it was considered fatal before the development of antibiotics. For that reason, we tend not to know what it was like to suffer from tuberculosis. During Thérèse’s lifetime, tuberculosis was often called consumption, because it slowly consumed the patient. Although a final photo of Thérèse, lying on a couch and covered with blankets outside her convent, shows only her face, it’s easy to see her weight loss and exhaustion. This also may partially explain one of the hallmarks of Thérèse’s autobiographical story: the time of spiritual darkness that she experienced at the end of her life. While a true “dark night of the soul” (which Thérèse unquestionably experienced) is a spiritual phenomenon in which God no longer seems to be present to the person, her physical suffering with tuberculosis shouldn’t be overlooked. Dying slowly of a disease which makes it difficult to breathe did not make it easier for Thérèse to bear her sense of spiritual isolation from God.

Thérèse’s famous autobiography, The Story of a Soul, has been translated and re-translated many times. But most people don’t realize that this profound spiritual testament was not written all at once or even for one person. Instead, Thérèse wrote it in three parts at the direction of other people. In 1895, Thérèse wrote a manuscript about her childhood, under obedience and at the direction of the prioress—who happened to be Thérèse’s older sister, Pauline (Mother Agnes, in religious life). In 1896, after Thérèse first recognized that she had developed tuberculosis, she was asked by another older sister, Marie (Sister Marie of the Sacred Heart, in religious life) to write about what she was experiencing. In 1897, months before Thérèse’s death, Mother Marie de Gonzague, the current prioress, also asked Thérèse to continue her writing.

Everyone knew that Thérèse’s end was approaching. Once all three manuscripts had been completed, Thérèse told Mother Agnes to feel free to edit her writings for the sake of a Carmelite obituary. Mother Agnes, who recognized the pearls of wisdom hidden in the writing of her younger sister, obediently did so after Thérèse’s death. A year later, The Story of a Soul was printed and distributed to a small audience. But it struck a chord in many hearts, and copies spread all over France and the world.

There are innumerable books about Thérèse, typically devoted to explaining her spirituality or describing the events of her life. One of those books, The Context of Holiness, written by Marc Foley, a Discalced Carmelite priest, takes a different approach. It examines her life from a spiritual and psychological perspective. How did it affect her to lose her mother at the age of four? Can psychology help us understand why she was bedridden when she was ten years old or why she suffered from scrupulosity for years? This book helps us recognize that Thérèse “did not grow in holiness apart from the human condition.” She experienced emotional struggles and pain in her personal and family life, as all of us do—and it was those struggles which helped her become a saint.

No, more than a saint. After all, Pope Pius XI called Thérèse the “greatest saint of our age” and recommended Thérèse’s “little way of holiness” for everyone. Since popes tend to lean toward books by theological giants like Saints Thomas Aquinas and Augustine of Hippo, this encouragement to read the short biography of an unknown Carmelite nun who never founded a religious order or even left her monastery is a notable endorsement. Thérèse’s message has resonated with popes and peasants and people in every vocation in life precisely because it is simply a restatement of the Gospel. We can all say, as Thérèse said, “My vocation is LOVE.” That is, we can show charity to the difficult people in our lives, accept suffering, and above all, trust in God, even when everything seems dark.

Why is Thérèse of Lisieux so astonishingly popular? It’s not because of the promise that roses will mysteriously appear after you complete a novena to her, as proof that she has interceded for you. It’s because, through her writing, she’s become the patron saint of all of us.

By laying bare her soul and all its pains for us, she has become the patron saint of practically every human difficulty: problems with friends, helpful or unhelpful family members, sickness, physical pain, exhaustion, depression, scrupulosity, approaching death, psychological struggles, questions about one’s vocation, and more. Thérèse faced them all with childlike trust in God, and she teaches us how to do the same. That is the “little way” that any of us can choose to follow, as we follow Christ.