Today is the Feast of Our Venerable Mother Euphrosynē.
✠✠✠✠✠ 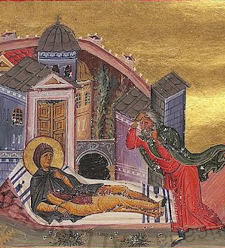 Our Venerable Mother Euphrosynē was born at the beginning of the fifth century in the city of Alexandria. She was the only child of illustrious and wealthy parents. When she was twelve years old, her mother reposed, and so the girl was raised by her Father, Paphnutios, who was a very devout Christian. He was in the habit of visiting a certain monastery, where the Igoumen was his Spiritual Father.

When Euphrosynē turned eighteen, her father wanted her to marry. He went to the monastery to obtain the Igoumen's blessing for his daughter's wedding. The Igoumen talked with her and gave her his blessing, but Saint Euphrosynē longed for the monastic life. One day, she gave away her possessions to the poor, and then she snuck out of the house.

The Saint had decided to enter a monastery in order to spend her life in solitude and prayer, but she was afraid that her father was apt to find her in a women’s monastery. Therefore, she disguised herself as a man and entered the same men's monastery which she had visited with her father from her childhood, calling herself Smaragdos. The monks did not recognize Euphrosynē dressed in men’s clothes, and so they received her into the monastery. The monks were impressed by her spiritual struggles and by her willingness to serve everyone.

There in a solitary cell, Saint Euphrosynē spent 38 years in spiritual endeavours, fasting and prayer, thereby attaining a high level of spiritual accomplishment.

Paphnutios was deeply saddened by the loss of his beloved daughter; more than once, on the advice of his Spiritual Father, he spoke to the "monk" Smaragdos, disclosing his grief and receiving spiritual comfort. Before her death, Saint Euphrosynē revealed her secret to her grieving parent and insisted that no one but he should prepare her body for burial. After he buried his daughter, Paphnutios distributed all his wealth to the poor and to the monastery, and then he was tonsured. For ten years, until the time of his own repose, he laboured in his daughter's cell.

By her life, Saint Euphrosynē reminds us that we must renounce "worldly passions and live soberly, uprightly, and devoutly" (Titus 2:12). That is, after rejecting the desires of this vain and sinful world, we ought to live abstemiously, with justice toward our fellow human beings, and with piety toward God.

Saint Paphnutios is also commemorated with his daughter Saint Euphrosynē on this day.
Troparion — Tone 1

You concealed your womanliness in asceticism, / and at your repose everyone was amazed, O Euphrosynē. / As a young girl you toiled like a man, / and by your intercessions you deliver those who honor you from dangers.
Kontakion — Tone 2

(Podoben: “Seeking the heights...”)
Longing to reach the life on high, zealously forsaking worldly pleasures here below, / you lived among men, O most comely one. / For the sake of Christ your Bridegroom, / you disdained an earthly betrothal.
Posted by Jovan-Marya Weismiller, T.O.Carm. at 00:06