Today is the Feast of the Hieromartyr Gregory, Bishop of Greater Armenia, Equal of the Apostles, Enlightener of Armenia. 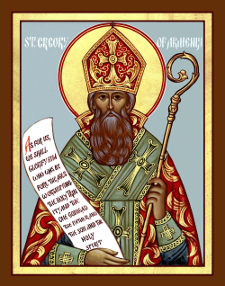 The Hieromartyr Gregory, Enlightener of Greater Armenia, was born in the year 257. He was descended from a line of Parthian Arsacid kings. Anak, the father of Saint Gregory, was a Parthian by birth. In his quest for the Armenian throne, Anak and his brother attacked their kinsman, King Kursar with their swords, leaving him mortally wounded. The King's servants found him still alive, and he was able to tell them what had happened. Before he expired, the King ordered the execution of Anak, his brother, and also their wives and children. The murderers were caught by a river, where they were slain and their bodies were thrown into the water.

One of Anak's relatives saved Gregory and his brother, who were infants, and hid them in his home. There was a revolt in Armenia, and King Artasirus of Persia was able to conquer Armenia and bring it under his rule. As for Arak's sons, one was taken to Persia, and Gregory was sent to the Roman Empire.

When he reached adulthood, Gregory lived in Caesarea in Cappadocia, where he was converted to the Christian Faith. Gregory married and had two sons, but soon was left a widower. Gregory raised his sons in piety. One of them, Orthanes, later became a priest, and the other, Arostanes, was tonsured as a monk and went into the wilderness to live in solitude.

In order to atone for the sin of his father, who had murdered the father of Tiridates, Gregory entered into the latter's service and was a faithful servant to him. Tiridates, who was serving in the Roman army, loved Gregory like a friend, but when he learned that Gregory was a Christian, he became angry. Saint Gregory, however, ignored his master's unjust wrath.

When the Goths attacked the Roman Empire, the Prince of the Goths challenged the Emperor to single combat. The Emperor was afraid to fight the Prince, so he had Tiridates put on his armour and take his place. Tiridates defeated his adversary without using his sword and led him as a captive to the Emperor. Then the entire Gothic army was defeated. In gratitude, the Emperor made Tiridates King of Armenia. When Tiridates offered sacrifice to his "gods" for his new position, he wanted Gregory to sacrifice with him. Gregory refused, and so Tiridates ordered that he be tortured.

The Saint was suspended head downward, with a stone about his neck, and for several days they choked him with a foul-smelling smoke, they beat and ridiculed him, and forced him to walk in iron sandals inset with nails.

During these torments, Saint Gregory sang Psalms. In prison, the Lord healed all his wounds. When Gregory stood before the King cheerful and unharmed, he was astonished and ordered that the torments be repeated. Saint Gregory endured them, not wavering, with his former determination and bearing. They then poured hot tin over him and threw him into a pit filled with snakes, scorpions, and other poisonous creatures. The Lord, however, spared His chosen one, and he was left unharmed.

Some pious women kept him alive for fourteen years by feeding him with bread, secretly lowering it into the pit. A holy angel appeared to the martyr, strengthening and encouraging him. During this time King Tiridates killed the holy virgin Saint Ripsimia (Ριψιμία, or Ριψίμη), the Eldress Gaianḗ (Γαϊανή), and 32 other Virgin Martyrs (some sources say 35) from Asia Minor. Tiridates, who seemed to have lost his mind after this, recovered six days later. Then the wrath of God struck King Tiridates, his associates, and the soldiers who had participated in the execution of the virgins. Beset by demons, their appearance resembled wild boars, as once happened to Nebuchadnezzar (Daniel 4:30). Running through forests and fields, they tore their clothes and devoured their own flesh.

Saint Gregory was taken from the pit, and then he was washed, dressed in clean clothes, and fed. Then he was led to the King. Everyone bowed before him, begging him to ask God to heal the King as well as the others responsible for killing the Holy Virgin Martyrs. First, the Saint asked about their relics, which remained unburied for nine days. Saint Gregory buried the bodies and then began preaching to the people, urging them to turn away from the darkness of idolatry and toward Christ. The people came to believe in Christ and wanted to build a large church. When it was completed, Saint Gregory had the relics of the holy nuns brought into it. Then he led King Tiridates to the church before the bodies of the Saints whom he had slain, so that they might pray to Christ for him. He repented, and at once his face was restored to its original appearance once more.

Soon all of Armenia was converted to Christ. The temples of the idols were destroyed, and churches for the worship of the only true God were built. Saint Gregory ordained priests, established schools, founded monasteries, and provided for the good order of the Church.

After this, Saint Gregory went into the wilderness, where he ended his earthly life in a manner pleasing to the Lord. His son Aristanes was made a bishop in Cappadocia and was one of the 318 Holy Fathers of. the Council of Nicea.
Troparion — Tone 4

By sharing in the ways of the Apostles, / you became a successor to their throne. / Through the practice of virtue, you found the way to divine contemplation, / O inspired one of God; / by teaching the word of truth without error, / you defended the Faith, even to the shedding of your blood. / Hieromartyr Gregory entreat Christ God to save our souls.
Kontakion — Tone 2

Today, let us the faithful, praise with songs and hymns / the admirable hierarch Gregory as an initiate in the sacred mysteries. / He was a contender for the truth, a vigilant pastor and teacher, / a light for the whole world, / interceding with Christ that our souls may be saved!
Posted by Jovan-Marya Weismiller, T.O.Carm. at 00:06