Today is the Feasts of the Holy Martyr Wenceslaus and of Our Venerable Father and Confessor Chariton.
✠✠✠✠✠ 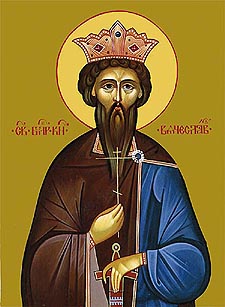 The Holy Duke Wenceslaus (Václav) of the Czechs was a grandson of the holy Martyr and Duchess Ludmilla (September 16), and he was raised by her in deep piety. He began to rule at age eighteen after the death of his father Duke Bratislav (+ 920).

In spite of his youthful age, he ruled wisely and justly and concerned himself much about the Christian enlightenment of the people. The holy duke was a widely educated man, and he studied in the Latin and Greek languages.

Saint Wenceslaus was peace-loving. He built and embellished churches, and in Prague, the Czech capital, he raised up a magnificent church in the name of Saint Vitus, and he had respect for the clergy. Envious nobles decided to murder the saint and, at first, to incite his mother against him, and later to urge his younger brother, Boleslav, to occupy the ducal throne.

Boleslav invited his brother to the dedication of a church, and then asked him to stay another day. In spite of the warnings of his servants, the holy duke refused to believe in a conspiracy and exposed his life to the will of God. On the following day, September 28, 935, when Wenceslaus went to Matins, he was wickedly murdered at the doors of the church by his own brother and his brother’s servants. His body was stabbed and discarded without burial.

The mother, hearing of the murder of her son, found and placed his body in a recently consecrated church at the ducal court. They were not able to wash off the blood splashed on the church doors, but after three days it disappeared by itself.

Your holy martyr Wenceslaus, O Lord, / through his sufferings has received an incorruptible crown from You, our God. / For having Your strength, he laid low his adversaries, / and shattered the powerless boldness of demons. / Through his intercessions, save our souls!
Kontakion — Tone 2

(Podoben: “You sought the heights...”)
You appeared as a bright star announcing Christ with your radiance, / which is repulsive to this world, O Martyr Wenceslaus; / extinguishing the allure of false gods, / you enlighten the faithful, / always interceding for us all.
✠✠✠✠✠ 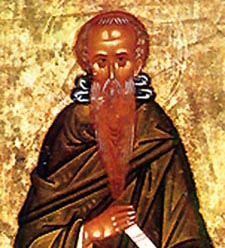 Saint Chariton the Confessor was born at Iconium in the province of Lycaonia and suffered there during a persecution against Christians in the reign of Emperor Aurelian (270-275). The example of the holy Protomartyr Thekla (September 24), who was also a native of his city, encouraged him to confess Christ since he had a great devotion to her.

Saint Chariton bravely denounced the pagan gods and staunchly confessed faith in the one True God, Christ the Savior. The holy Confessor underwent fierce tortures but, by God's Providence, he survived. The persecution ended after Aurelian's death in 275. Saint Chariton was among the many Christians who were released from prison, and he resolved to dedicate his entire life to the service of the Lord. Although he escaped death, he grieved because he had not received the crown of martyrdom.

After arriving at Jerusalem on a pilgrimage to the holy places, he fell into the hands of thieves. They tied him up and threw him in a cave, intending to kill him later. After they left to find people to rob, the saint prayed fervently to God expecting to be put to death. He did not ask God to deliver him, but instead, he entreated Him to do with him as He wished.

At this time a snake crawled into the cave and began to drink wine from a vessel setting there. Later it vomited forth its deadly venom, poisoning the wine. When they returned to the cave, the evil men drank the poisoned wine and they all perished. Thus, their wicked lives came to a fitting end. Saint Chariton gave thanks to God, and then he gave away the gold which the malefactors had stolen, distributing it to the poor, to churches, and to monasteries. He began his ascetic struggles in the place of his miraculous rescue, and there he built a church. In time a monastery was established: the renowned Pharan Lavra in Palestine. Saint Chariton's fame drew many disciples to him. He governed them with paternal affection, and he elevated them to the highest degrees of virtue.

Saint Chariton compiled a strict Rule for his monastery. Yearning for solitude, the monk withdrew farther into the desert in order to avoid the praise of men, but he never rejected anyone who sought his spiritual guidance. He founded two more monasteries: the Jericho (called the Monastery of Saint Chariton) and the Souka, which was called “the old Lavra.” He also brought many Jews and pagans to the Faith.

At the end of his life, Saint Chariton struggled in a cave atop a hill near the Souka monastery, but he did not cease to provide guidance for all three of the monasteries which he founded. He fell asleep in the Lord peacefully and at an advanced age on September 28, 350.

According to Tradition, Saint Chariton compiled the Office of the Monastic Tonsure. Saint Chariton was buried at the Pharan monastery, in accordance with his last wishes. His grace-filled relics were enshrined in the church that had been built on the site of the robbers' cave.
Troparion — Tone 8

By a flood of tears, you made the desert fertile, / and your longing for God brought forth fruits in abundance. / By the radiance of miracles you illumined the whole universe! / Our Father Chariton, pray to Christ God to save our souls!
Kontakion — Tone 2

You delighted in the monastic life, divinely-wise one / and conquered the bodily passions; / you increased in faith, blossoming as the tree of life in the midst of Paradise, / most blessed and holy Chariton!
Posted by Jovan-Marya Weismiller, T.O.Carm. at 00:06