They originate from yet another 'synod', one of university students. If it were possible, 'synodality' would be the death of the Church. It's not possible, but it will do untold damage. 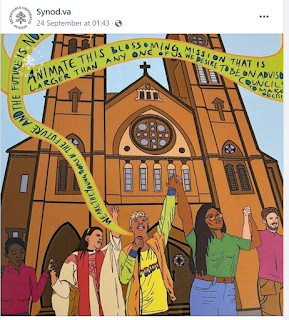 Comments on the Synod of Bishops’ Facebook page zeroed in on the woman in clerical vestments.
A social media stir has greeted the image of a “woman priest,” among several other artistic images, posted to the Synod of Bishops' Facebook page. Though it is unclear whether the Facebook page noticed the figure, the artwork does come from a Philadelphia gathering of college students that said Holy Orders should be open to women.

“In #Frascati22 our experts are working on the syntheses produced during the local consultation phase,” the Synod of Bishops’ Facebook page said in a Sept. 24 post, referring to the Italian town of Frascati. These gatherings for the Synod of Synodality included “pages and pages full of stories, insights, but also in some cases real works of art. Look at that!”

The Facebook post includes several cropped artworks with the Latin-language watermark of the Synod of Bishops in the upper-left corner.

One image shows five young people holding hands in front of a church, including a woman in the vestments of a priest. She is next to a person holding a microphone and wearing a yellow shirt that says “pride” in rainbow-colored letters. The person with a microphone appears to say “we are the young people of the future and the future is now.” The uncropped image is subtitled “Chain of Discipleship.”

Comments on the Synod of Bishops’ Facebook page zeroed in on the woman in clerical vestments.

“Why is there a woman in a chasuble?” asks one commentator.

“This is epic cringe. Uggh,” says another.

In #Frascati22 our experts are working on the syntheses produced during the local consultation phase. Pages and pages full of stories, insights, but also in some cases real works of art.#synod #ListeningChurch #WalkingTogether pic.twitter.com/UqGAtHjWSx— Synod.va (@Synod_va) September 24, 2022

Though the images are unsourced, CNA determined they originate with the Philadelphia Catholic Higher Education Synod. The artwork is included, uncropped, in this synod’s May 16 summary report. The images “reflect and precede each of the organizing themes included here,” the report says.

Despite authoritative Catholic teaching that the Church cannot ordain women, the report’s authors recommend that the Church “open doors to women in leadership and Holy Orders.”

In the 1994 document Ordinatio Sacerdotalis, St. John Paul II definitively excluded the possibility of the ordination of women to the priesthood. In 2016 remarks, Pope Francis characterized this as “the final word.”

Becky McIntyre, a northwest Philadelphia artist and alumna of St. Joseph’s University, created the images. On her professional website, she said she had been “commissioned as a visual notetaker to facilitate an interactive art installation and create digital synthesized notes of the Philadelphia Catholic Higher Education Synod cross-campus listening session event.”

CNA reached out to a spokesperson of the Synod of Bishops but did not receive a response by publication. CNA also sought comment from McIntyre and the Philadelphia Catholic Higher Education Synod.

One of McIntyre’s images summarizes the synod and pictures students against the backdrop of the Philadelphia skyline. One element of local color is included: a small image of Gritty, the mascot of the National Hockey League’s Philadelphia Flyers.

It appears to be a visual summary of this synod: 48 listening sessions at 14 universities, 28 interracial sessions, and 27 interreligious meetings. Six young people sit in folding chairs. They are labeled as “Muslim,” “first-year education student,” “physics major,” “CLC leader,” “grad student” and “Queer.”

The image records several statements, though it is unclear if they are direct quotations from synod participants. “Being Catholic is a crucial part of my identity,” says one. “It’s all about encounter with Christ,” reads another comment.

Other comments seem more critical. “I fear labeling myself Catholic because I don’t want to be thought of as ignorant,” says one. “The only woman leader in my church was in the choir,” said another. “I don’t want my future family to be excluded because I’m gay,” one comment says.

In another image, McIntyre appears to depict the Church as a refuge from all the tensions, divisions and broken bonds of life. Yet another image depicts the threads of various identities, including racial, ethnic, and sexual identities, being woven into a single garment by hands captioned “God is Love.”

Some students found joy in “a strong affiliation with a tradition with deep history in the midst of so much change provides comfort and clarity.” Others cited an “inability to be who you truly are in the church, being unhealthy, hurtful, wrong.” There was consensus on some matters like the need to “be animated by a God who loves recklessly and a Church defined by hospitality.”
Posted by Jovan-Marya Weismiller, T.O.Carm. at 22:46