Mad Analysis: Mosley and the "Far-Right"

I couldn't agree more! I pointed out four years ago that Fascism/Naziism and Communism are Blood Brothers and to call Mosley a  'Man of the Right' is bollocks. 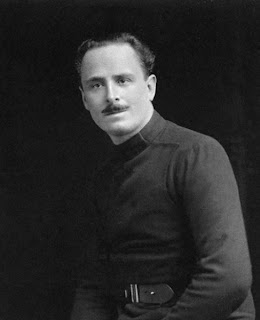 It was on this day in 1980 that the washed up would-be dictator of Britain, Sir Oswald Mosley, Bt. died at his home in northern France. I doubt many in the United Kingdom today think of Mosley, but it is significant that, when they do, they will describe Mosley as the leader of the British Union of Fascists (which he was) usually with the preface of “the far-right” which is about as untrue as one could possibly be. However, he was, and is still remembered today, as a “bad guy” and the bad guys are always of the “far-right” in the modern media. However, if one were to take an honest look at the background of Oswald Mosley and the things he advocated for throughout his life, one would see that, rather than “far-right”, there was very little right-wing about him at all, in any degree. Just consider some of his positions and ask yourself if a politician holding these same positions today would be more at home on the political right or the left. You be the judge. Here are some of the political positions of Oswald Mosley: 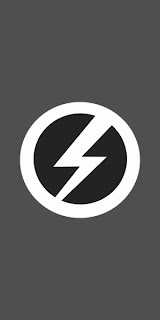 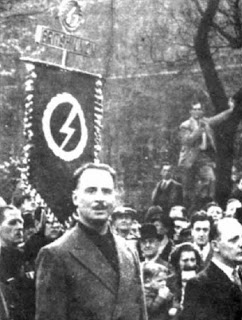 Now, I will freely admit that I would have opposed the actions of the Black and Tans in Ireland as well but it was a policy more popular with the right than the left at that time. Opposition to large-scale immigration is also something that, these days, neither the Tories or Labour really seem to oppose. So, on the whole, I do not see how anyone could look at the entirety of the career of Oswald Mosley and conclude that he was a “far-right” political figure. Oh, but wait! He was anti-Semitic! That means he was a racist and the racists are all on the right. Right? Well, today, in mainstream politics anyway, no one wants to say anything that is clearly anti-anyone but I can say that, from what I have seen, hostility to Israel seems to be much more prevalent on the left than on the right. Take from that what you will though, there may not be very strong opinions even among Jews on the subject of Israel since, in my country anyway, the right is the most vocal in their support of Israel but most Jews vote consistently in favor of the left. Yet, broadly speaking, everywhere I look today, it is the left that wants to determine things based on race and the right which wants to treat everyone the same regardless of race with no special penalties or benefits for anyone.

I am sure, because it has happened any time I say that people like Hitler or Mussolini (who may or not have been one thing or the other on the political spectrum) were at least products of the political left, that someone will say that I am being terribly unfair, I am completely wrong and being utterly offensive. Well, I am afraid I may not be offensive enough so let me throw in another firebomb; there are plenty of people in British political life today that I would consider far worse than Oswald Mosley and I would even prefer someone like Mosley over a number of people on the political scene today in Great Britain and some other Commonwealth countries. Why do I say that? Because, frankly, Mosley does not scare me as much as some other people do. Part of that is because of something I would fundamentally disagree with Mosley on. 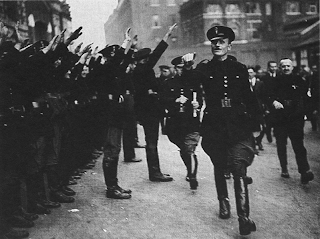 A fundamental difference I would have with Mosley is that he believed in ideology (as described by Pat Buchanan) as a “political religion” and that his brand of fascism would solve all of the problems of British society. I do not believe that to be the case by any means. A country built simply on ideology will have very shallow roots and, in my opinion, would not last long. For myself, certainly in the case of the United Kingdom, the key, the foundation, the most important thing (outside religion -though they are, of course, linked) is the monarchy and the fact of the matter is that Mosley was not against the monarchy. If that position changed later in life for him, I don’t know for certain but I have never heard that it did. On the subject of “Loyalty to the Crown” Mosley wrote that, “Whatever is good in the past we both respect and venerate. This is why, throughout the policy of the movement, we respect and venerate the Crown. Here, at least, is an institution, worn smooth with the frictions of long ago; which in difficult experience has been proven effective and has averted from this Empire many a calamity. We believe that, under the same impartial dispensation, the greatest constitutional change in British history may yet be peacefully achieved”. He meant, by that, of course the conversion of Great Britain from a parliamentary democracy to a fascist state.

Because of the last line of that statement alone, I could never be an enthusiastic supporter of Mosley (in addition to opposing just about every economic policy he ever came up with or his infatuation with European unity) because, it seems to me at least, that his support for the monarchy was somewhat conditional. I think his way of looking at the monarchy was vastly different from my own. However, he was not opposed to it and even gave it some praise whereas there are some in the British government and on the political scene today that totally oppose it and make no secret of the fact that they would like to see it destroyed and in my view those people are far more dangerous than someone like Mosley ever could have been. After all, as was proven in Italy, no matter how bad things might become, as long as the monarch remains, there is always the ability, with the proper support, to get rid of someone like Mosley and reverse any disastrous policies he might implement. A country, any country, has to have something at its core that all else is built upon; one thing, no matter how seemingly nominal it might be, that everyone must be united in upholding. Ideologies will come and go, can cause varying degrees of harm or benefit, but as long as the monarchy remains there is always hope, there is always a chance, there is always another alternative. 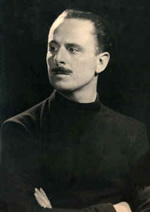 Mosley may have had some frightening ideas but he never held any real political power. There are plenty in Great Britain and other Commonwealth realms today with ideas just as frightening and even more so who actually do. And if you are going to call Mosley and his comrades people of the “far-right” just consider that Mosley himself, in an interview with the American conservative William F. Buckley Jr. said, “…it’s all nonsense to believe that fascism was ever a conservative movement or a movement of the right…” His words, not mine.