The Mystery of Mont-Saint-Michel

And one last post for Michaelmas discussing the great abbey of Saint-Michel off the coast of Normandy. Secularised by the Republic, there are again monks there, but not the Benedictines who founded it. 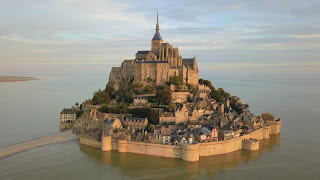 However one solves the mysterious Sword of Michael, it is a reminder to us in our hi-tech age that our ancestors had perhaps more technologies than our iPhones have dreamt of. They had a mystical understanding of the interactions of heaven and earth that we have lost. The ruins of their monasteries, the relics of their saints are the remains of a world crowded by wonders and thronged by angels.

In the summer of 1987, I was living in England working as an Anglican priest. I found myself between jobs, so with three months free,  I decided to make a hitchhiking pilgrimage to Jerusalem staying in monasteries and religious houses en route.

After crossing the channel to Normandy I headed for Le Mont-Saint-Michel—the famous monastic mountain on the coastal border of Normandy and Brittany. When I arrived I was immediately taken not only with the incredible architecture and setting, but also with the almost palpable spiritual atmosphere of the place. Situated on a bay noted for its mercurial tides and quicksand, the mountain of the angels was at once magnificent and magical, dangerous and delightful.

There began an intense interest in the ministry of angels. As I traveled East I sensed a renewed awareness of my guardian angel’s presence. The hardship of walking/hitch hiking every day and the sojourns in monasteries made the pilgrimage seem like a walk with the angels.

This awareness was raised even further when, on one of the days I was forced by circumstances to take the train, I noticed as I sped towards the Northern Italian city of Turin another mountain monastery. High above the Val de Susa was a church crowning a mountain. I learned that it was Sacra San Michele—another St Michael Mountain.

Having lived in England, I was already familiar with the English mini-Mont-Saint-Michel—St Michael’s Mount—a church and former monastery on an island off the coast of Cornwall in Western England. Having seen Sacra san Michele, I had a hunch about these three Saint Michael mountain top monasteries, so a few days  later at the Cistercian  monastery of Chiaravalle in Milan I got a map and a ruler and my hunch seemed to be proved correct. St Michael’s Mount, Mont-Saint-Michel, and Sacra San Michele were on a geographical straight line.

On my return to England I discussed my findings with an Italian friend. He said, “What about Monte Archangelo on the Gargano peninsula—the heel of the boot in Italy? According to legends, your three monasteries were situated in their unusual locations due to visions of their founders of the Archangel Michael. Monte Gargano is also an ancient shrine to Michael the Archangel.” So I got out my atlas and my ruler, and Monte Archangelo was indeed on the same straight line.

Intrigued by this unusual phenomenon, my Catholic friend added, “Then there is also—in the other direction— the Irish island monastic settlement of Skellig Michael. The island, since made famous as a setting for a mediocre film in the Star Wars franchise, was also on the “Michael Line.”

Furthermore, it seemed that if you extended the line Eastward it went through Athens to Jerusalem.

Although I discovered this geographical monastic curiosity, I should have known that I was not the first to notice it. It is known as “The Sword of St Michael” and no one has, to my knowledge, an adequate explanation for its existence.

Although I discerned that the line goes through Athens to Jerusalem, others believe it touches down in Greece and Israel at two other locations: the Island of Symi where a large statue of Saint Michael is located, and Mount Carmel.

Legend has it that each monastery was built precisely in its impossible location according to instructions to the monastic founders given by the Archangel himself. Others observe that there are many churches dedicated to Michael on hilltops since it was thought he would lead the heavenly armies on the Lord’s return, and they would set foot on earth at the high points.

More practically-minded theorists point out that the seven monastic sites are aligned with sunset on the summer solstice. Solar, lunar, and stellar alignments in ancient monuments and churches are well known. In fact, in the research for my book on the magi I discovered that “astroarcheology” is the name for the academic discipline dedicated to the study of this phenomenon. While this explains the orientation, it does not explain the dedication to Saint Michael and the fact that the seven monasteries’ alignment is so precise that it accounts for the curvature of the earth—nor does it explain how the three central sites are almost exactly equidistant from each other.

However one solves the mysterious Sword of Michael, it is a reminder to us in our hi-tech age that our ancestors had perhaps more technologies than our iPhones have dreamt of. They had a mystical understanding of the interactions of heaven and earth that we have lost. The ruins of their monasteries, the relics of their saints are the remains of a world crowded by wonders and thronged by angels.