McCarrick: Architect of China-Vatican Accord

If the evidence coming out that he was a communist plant is true, this all makes perfect sense!
From Church Militant 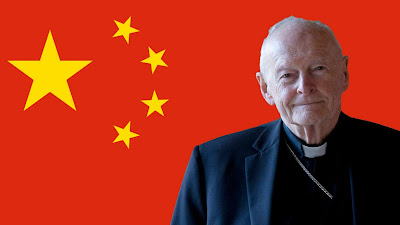 Over two decades, Theodore McCarrick helped lay the groundwork for the 2018 China-Vatican accord recognizing Communist-appointed bishops; now, with new data suggesting the disgraced ex-cleric may have been a Communist plant, his efforts to normalize relations between Beijing and Rome are attracting renewed interest.
Beginning in the 1990s, McCarrick, then-archbishop of Newark, began visiting China in an "unofficial" capacity to advocate for reconciliation. During the 2000s, he became the first Western cardinal to set foot on the Chinese mainland since 1951, when diplomatic ties were severed over Beijing's policy to end papal authority over the Catholic Church in China.
During eight trips to China, McCarrick met with the heads of the State Administration for Religious Affairs and the Bishops' Conference of the Catholic Church in China — a group not recognized by the Vatican.
On at least two visits, McCarrick stayed in a Communist-run seminary in Beijing. His host, Vice Rector Fr. Shu-Jie Chen, was clearly devoted to the Politburo, not the Magisterium. According to a report by Christopher Sandrolini, deputy chief of mission at the U.S. embassy to the Holy See, Fr. Chen "downplayed persecution of the underground Church," calling the faithful Chinese Catholics "uneducated" and "elderly." Sandrolini noted Chen seemed "unconcerned" that "evangelization was not an option for official religious personnel."
McCarrick last visited China in 2016 — a trip he described as a meeting with "old friends."
Among McCarrick's old friends was Aloysius Jin Luxian, a "bishop" of the Communist-backed Chinese Catholic Patriotic Association (CCPA) — a false, Chinese Communist counter-Church.
Jin was a strong supporter of compromise with the Communists. In 1985, he accepted ordination as a bishop without Vatican approval — in other words, in violation of Canon Law — and played a major role in leading the CCPA. In 2005, he was recognized as Apostolic Administrator to faithful Shanghai bishop, Joseph Fan Zhongliang.
A Vatican push to normalize relations began in earnest under Pope Benedict XVI, who made diplomatic outreach to China and Vietnam a priority of the Holy See.
The Vatican enjoyed a breakthrough in relations with Hanoi with the establishment of the "Vietnamese model" for appointing bishops. Under this agreement, a list of candidates for the country's episcopate is compiled jointly by Vatican and Vietnamese authorities, with the new bishop approved by the Pope after officials in Hanoi sign off on the selected candidate.
But Beijing insisted on a "Chinese model," under which Communist authorities would have complete control over the selection of bishops.
Progress ground to a halt in 2010, when Beijing consecrated several "bishops" of the government-approved Chinese Catholic Patriotic Association (CCPA) — a false, Communist counter-Church — without approval from Rome.
McCarrick was forced to withdraw from diplomatic efforts in 2011, when Pope Benedict saddled him with penalties for his serial sex abuse of seminarians and minors, but re-emerged as an unofficial Vatican ambassador in 2013 when, just months into his pontificate, Pope Francis lifted the penalties imposed by Benedict.
At that point, though Beijing displayed "no sense of urgency about solving or improving relations with the Vatican," McCarrick began trumpeting China's new president, Xi Jinping, as a man he could work with.
In a February 2016 exclusive with The Global Times, McCarrick suggested that under Chinese President Xi, Communist hostility toward the country's underground Catholic Church was a thing of the past."The Maoist attitude toward religions has changed," he declared. "Because of that, there may be more changes in the future to allow China to develop their own religious lives in a good and healthy way."
McCarrick expressed hope that Xi could be persuaded to launch "a great new moment in history" with the Vatican, and suggested that the similarities between Xi and Pope Francis could be "a special gift for the world."
"I see a lot of things happening that would really open many doors because President Xi and his government is concerned about things that Pope Francis is concerned about," said McCarrick, asserting the two leaders are of a similar mind on issues like "the care of poor, older people, children, our civilization and especially the ecology."
In applauding Xi's supposed care for children, McCarrick was noticeably silent on the country's nearly 350 million abortions since the introduction of the One-Child Policy in 1979.
Faithful Chinese Catholics scoffed at the notion President Xi represented a kindler, gentler Communist and begged the Holy See not to surrender control of the Church to authorities in Beijing.
Their pleas went unanswered; in September, the Vatican signed an accord with Chinese officials recognizing Communist bishops, thereby allowing the government much greater influence over the Church.
Chinese lawmakers have used the agreement as cover to dramatically intensify their persecution of underground Catholics faithful to Rome.
In the past few months, Chinese Communists have launched an all-out assault on the underground Church — arresting priests, burning Bibles, forcing churches to remove crosses and icons and bulldozing shrines and pilgrimage sites.
For the millions of underground Chinese Catholics suffering under Xi, McCarrick's defrocking comes as little solace.
Posted by Jovan-Marya Weismiller, T.O.Carm. at 23:10