A First in English: Cardinal Bacci's Address to the Council on Latin and the Vernacular in the Liturgy

As we continue the battle for Tradition, here are the thoughts of one of the first warriors on Latin in the Liturgy.

The following is the speech Cardinal Bacci gave at the Council in October 1962 on Latin the use of the vernacular in the Sacred Liturgy of the Latin Church. Bacci's name has, of course, been linked with one of the most important liturgical documents in the post-Conciliar years, the so-called Ottaviani Intervention or Short Critical Study on the New Order of Mass, delivered in 1969 under his and Cardinal Ottaviani's name to Paul VI. 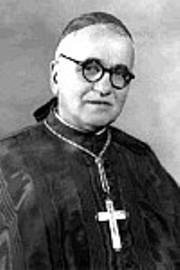 The speech is available in Volume 1 of the "Acta Synodalia”, bk. 1, 409-10. As far as we know, it has never been translated into English in its entirety.

On the Latin tongue in the sacred Liturgy.
Do not think me, as a lover of the Latin tongue, to be too great and exaggerated a lover of the Latin language in all the rites of the sacred Liturgy. Indeed, not at all; for I am open to realizing the necessities of our times. I shall relate to you my opinion concerning this matter as briefly as I am able.
1. National languages, in my judgment, ought not to be brought into the celebration of the Mass, so much because it can produce grave danger and harm; as because the very thing which we all desire to obtain, that is, a greater participation of the people in the Eucharistic sacrifice, and for listeners a greater understanding of those things which are read by the priest, can be attained in another and more apt manner, I say in another and more apt way.
Already the distinguished man Antonio Rosmini, in his little book «Le cinque piaghe della Chiesa» (On the five wounds of the Church) has asserted that the Latin tongue is an obstacle between the celebrant and the people; but this book has already been condemned by the Church. And not only the Council of Trent (sess. 22, cap. 8, can. 9), but also the Roman Pontiffs have ordained that Mass in the western Church be celebrated in the Latin language, always preserving the other liturgical tongues of the oriental Church… It suffices to recall to mind the Encyclical Letter of Pius XII, on the sacred Liturgy; and also the most recent Apostolic Constitution Veterum sapientia of the reigning Pontiff.
2. But it is easily proved that by substituting national languages for the Latin tongue, either partially, or entirely, we are not able to obtain the very thing which some strive for; that which is desired is not achieved.
And indeed, by simple and bare reading made in the national tongue, the people understands very little or nothing, particularly if it concerns difficult matters, as e.g. on the epistle to the Hebrews, readings of the Old Testament, the book of Revelation, etc.; no indeed, in the meanwhile, doubts and perturbations of the soul can be produced, most of all in adolescents, for example in the reading of the story of the lustful old men who wish to consort with the chaste Susanna, and in the reading «His left hand is under my head, and his right hand shall embrace me» (Canticle of Canticles 2:6; 8:3). These want for right interpretation, not merely bare translation.
3. How, therefore, are we able to remove this obstacle, which in truth exists, and to achieve this laudable proposal? Through a homily made in the vulgar tongue, through catechism to the people, by which all things might opportunely be explained and accommodated to the understanding of the people. This the Supreme Pontiffs have already sanctioned and more and more often have commended. But a bare translation of Sacred Scripture into the vulgar tongues avails very little for the understanding of the people and for fostering its piety. For this same reason, translations of the Sacred Scriptures without suitable annotations are not approved by the Church, at least not for the people.
Moreover, there is in use today a Missal translated into the national languages. And likewise, much more laudably, it happens in many places that while the priest celebrates the Mass in the Latin tongue, a certain approved speaker recites the words of the sacred rite in the vulgar tongue, with opportune observations accommodated to the grasp of the people.
It is therefore not at all necessary to introduce the national languages into the celebration of the Mass, which otherwise, as I shall soon indicate, is able rather to cause the gravest harm.
4. As a matter of fact, that which is sought after, that is, greater understanding on the part of the people, more participation, we not only cannot achieve in this manner, but also, dangers, divisions, and contentions in not a few regions of mixed language are easily brought in.
For in what language, which is not Latin, will the Mass be celebrated, e.g. in Alto Adige or South Tyrol? In what language in some cities of Switzerland, where there are three languages in use? In what tongue in Canada, where the English and French tongues are in use? In what tongue in parts of the Belgian nation, where likewise two languages are had? Etc…
Certainly for this reason one ought to fear lest nationalism and its contentions be brought to the altar and thrust upon the Eucharistic sacrifice. That this indeed would be very detrimental, no man does not see; while on the contrary, the Latin tongue, as the Supreme Pontiffs have asserted, ought to be a bond of unity; and if, as I have said above, it is explained correctly and advantageously through homilies and catechism—which is entirely necessary and… [which] the Supreme Pontiffs have set down—the sacred rites are able to be understood by the people.
I appeal to you, therefore, venerable Fathers, that you consider a matter of such great importance with attentive mind, lest harm be brought to the unity of the church.

5. The matter is had in a different way when it is concerned with Sacraments and Sacramentals. For indeed, while in the public celebration of Mass the matter is between the people and the celebrant, on the other hand, in the administration of some Sacraments it is between the priest and only one believer, (as in sacramental Confession), or between the priest and a few faithful, often of the same language, as in Baptism, in Confirmation, in Extreme Unction, in matrimony and in sacramentals.
As I have said, the national languages also can be introduced into the rites of some Sacraments, yet with the approval of the Apostolic See. Pius XII has already written of it, in a general way, in the Encyclical Letter on the sacred Liturgy (AAS, vol. 39, p. 545).
6. Yet it seems opportune to me that this very grave case be not left to individual episcopal Conferences of particular regions (cap. 1, n. 24), but that it be established in a unitary way—a unitary way —for the whole Church by the Apostolic See.
For if the thing is left to the undertakings and petitions of episcopal Conferences, great diversity will be had in various regions, with detriment of unity and perhaps with Babelic confusion; and for that reason it will be harmful, since today not only Catholic men, but priests also easily bring themselves from one region to another, from one nation to another.
These things have I considered, venerable Fathers, which I would propose to your contemplation and prudence. At this point, there follow the formulae which, in my judgment, ought to be substituted in this schema…

[Translation by Timothy Wilson.]
Posted by Jovan-Marya Weismiller, T.O.Carm. at 19:55