A Pope Speaks: Pius XII on Something the #PBC2019 Summit Didn’t Discuss. AUDIO

Fr Zed posts a Catholic Pope's call for purity. Pope Pius must be praying at the Throne over the Church today. 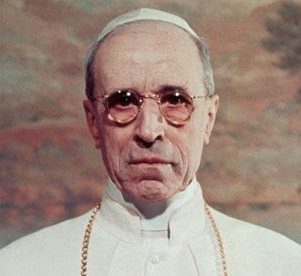 First, the Roman “summit” rammed a major aspect of The Present Crisis into a smaller box than
reasonable people allow.  They excluded many things that could have been addressed.  One of them is the devolution of morals and the lost of the sense of purity.
Second, most people today have heard and would recognize the voices of recent Popes. Who can forget the great bass with the Slavic tinge of John Paul II and his particular cadences? However, most of us have not had a chance to hear the voices of Popes of deeper into the last century.
Both of those issues come together in this snippet from the sermon Pius XII gave for the canonization of St Maria Goretti.  Pius, from about 1950 onward, seeing what was going on in society called for greater purity.  What would he think about today?
Here is a snippet of Pius XII, the last Roman Pope.

What you hear Pius XII say in the recording:

Perchè, diletti figli, siete accorsi in così sterminato numero alla sua glorificazione? Perchè, ascoltando o leggendo il racconto della sua breve vita, così somigliante a una limpida narrazione evangelica per semplicità di linee, per colore di ambiente, per la stessa fulminea violenza della morte, vi siete inteneriti fino alle lacrime? Perchè Maria Goretti ha conquistato così rapidamente i vostri cuori, fino a divenirne la prediletta, la beniamina? Vi è dunque in questo mondo, apparentemente travolto e immerso nell’edonismo, non soltanto una sparuta schiera di eletti assetati di cielo e di aria pura, ma folla, ma immense moltitudini, sulle quali il soprannaturale profumo della purezza cristiana esercita un fascino irresistibile e promettente : promettente e rassicurante.
Why, beloved children, have you rushed in such boundless numbers to her glorification?  Why, hearing or reading the account of her brief life, so much like a pristine gospel narrative for the simplicity of its line, for the painting of its setting, for the very flaming violence of the death, were you touched even to tears?  Why has Maria Goretti conquered your hearts so quickly, even to the point of becoming your favorite, your darling?   Thus, there is in this world, manifestly overwhelmed and sunk into hedonism, not only a sparse crowd of the chosen, thirsting for heaven and pure air, but a throng, but an immense multitude, upon which the supernatural fragrance of Christian purity works an irresistible and promising allure: promising and encouraging.

Some visuals to go along with the sound.

Maria Goretti was murdered in the course of an attempted rape, which she resisted to the point of being mortally wounded.  The Church teaches that those who die bearing witness to Christ, to the Faith, or to some virtue or quality inseparable from the Faith, in that moment manifest the virtues in a heroic way and are, therefore, able to be proposed even for elevation to our altars.  Something about St. Maria Goretti captured the imagination of the Catholic faithful in the early 20th c., as did, for example, St. Therese de Lisieux.  Their lives show us that we can, in fact, try – with the help of grace – to be clean in a world that is fallen and fallen far.  It is not hard to understand why even some Catholics react with strong negativity about Maria Goretti.  They’ve gone the way of the world.
Also, my contact with exorcists informs me that St. Maria Goretti is a mighty intercessor and a serious terror of demons, surely after the heart St. Joseph… known for his purity.   Joseph most chaste… Guardian of virgins… Solace of the wretched… Patron of the dying… THE Terror of demons.
Posted by Jovan-Marya Weismiller, T.O.Carm. at 16:00