Apple Cooperates With the CCP to Censor “Bitter Winter”

I have never owned an Apple product and  never will.

A number of apps, media and VPNs are blocked from operating in China, where cyber-control against freedom of speech and information has become a national obsession.

Yes, it is just as you read. Apple, the symbol of the free world, has knelt to the illiberal Red Dragon. For some, Apple is the only “power to the people” revolution that has truly liberated Joe Blow from Kokomo, putting the world in his hands through the a-dream-is-a-wish-your-heart-makes iPhone, iPad or any other iOS device. But the reality is much more prosaic ‒ and rough. It is called business as usual, and it blocks us at Bitter Winter in our daily effort to inform precisely those people living in China about the systematic denial of religious libertyand the human rights violations happening in their country. It is these people that may not be aware of what occurs in other parts of China and to other religious or ethnic groups.

As Bitter Winter readers know all too well, freedom in China is forbidden. What you can do in most parts of the world, even in remote countries thanks to mobile wireless Internet access devices, you can’t do in China. Even as the country with the largest population on the Internet since 2008, China has the most extensive and advanced web censorship in the world, banded together in a stunning combination of legislative actions and technologies nicknamed “The Great Firewall of China” that Human Rights Watch has exposed in details. It serves as the “Shame Wall” that divided Berlin and the whole world during the long years of the Soviet “empire.” The Berlin Wall has been the only example of a barrier built to prevent one’s people from going outside, rather than enemies from coming inside. Similarly, The Great Firewall of China is the opposite of the Great Stone Wall that runs thousands of miles across the country: it doesn’t protect, it represses. 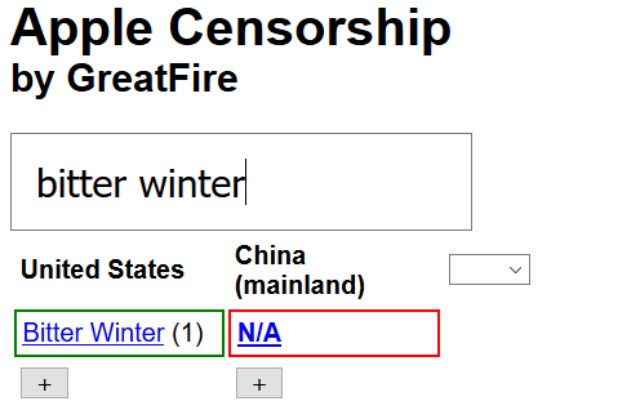 But this has been only the beginning. Now despotic China has at its complete disposal nothing less than Apple, the mother of all personal computing devices, smartphones, and tablets. This is what a new website reveals bluntly. It is called AppleCensorship.com, and anyone can access it to check the Who’s Who of the apps and sites that the Chinese Communist Party (CCP) regime blocks. I just did it for you, but you can enjoy the experience on your own. Go to the website, and you can compare the accessibility of each and every app available through the Apple Store in the United States and China. Type in “Bitter Winter,” press Enter, and you will see that, while you can read us in the US, in China we result in “N/A.” Click this second result, and the system will tell you that the address you searched cannot be interpreted either because one of the protocols is not associated to any program, or it is not allowed in that context. Of course, the protocol we use is in great shape: simply we are not welcome in China. Just because we inform, we denounce, we call for freedom.

AppleCensorhip.com is operated by GreatFire.org, a watchdog monitoring the Internet cleansing machinery of the CCP. On their website, they introduce themselves as “[…] an anonymous organization based in China. We launched our first project in 2011 in an effort to help bring transparency to online censorship in China. Now we focus on helping Chinese to freely access information. Apart from being widely discussed in most major mass media, GreatFire has also been the subject of a number of academic papers from various research institutions. […] In 2016, GreatFire won a Digital Activism fellowship from Index on Censorship.”

GreatFire.org provides censorship-defeating tools and services that are having a significant impact in China. On their website, people can freely download FreeBrowser, described as “[…] the only browser that allows Chinese internet users to directly access uncensored news;” FreeBooks, designed for counteracting the Chinese authorities’ kidnapping of book publishers by “[…] making it easy for readers in China to get their hands on uncensored e-books and audiobooks”; FreeWeChat for messaging and FreeWeibo for microblogging; and other resources. Their “FreeWeibo.com won the 2013 Deutsche Welle ‘Best Of Online Activism’ award in the ‘Best Innovation’ category.” GreatFire.org has also worked with the BBC to make the Chinese-language BBC website available to users in China. 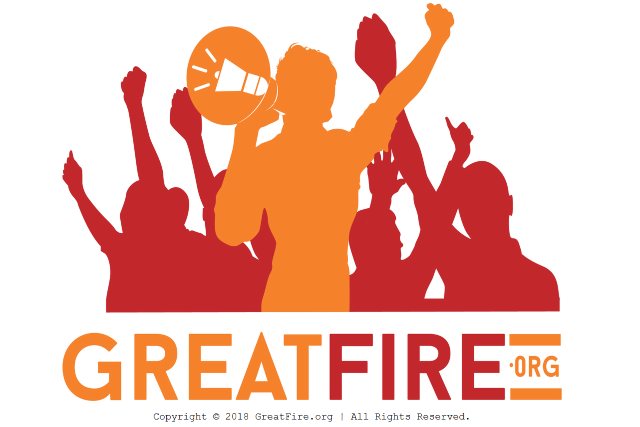 And guess what? We didn’t know that Apple was helping the CCP to block Bitter Winter in China. We just learned it from The Intercept, actually reading one of its well-documented and well-researched articles published more than 20 days ago. We are thankful to that online magazine because they read us and checked if people in China could do the same. As the magazine underlines, this happens to other media too, like Radio Free Asia, Tibetan News and Voice of Tibet. As to The New York Times, it is accessible to people in China only in its English version. If one types in the name of the journal in Chinese characters (“纽约时报), it is blocked. The CCP censorship of the famous US daily has, in fact, been already exposed in the past, just like the blocking of several VPNs.

It is instead still true that Apple is “[…] blocking censorship circumvention tools like Tor and Psiphon” as well as “Google’s search app and Google Earth.”

The truth is out there, and not only from today. As The Intercept notes, “[i]n late 2017, Apple admitted to U.S. senators that it had removed from its App store in China more than 600 ‘virtual private network’ apps that allow users to evade censorship and online spying. But the company never disclosed which specific apps it removed — nor did it reveal other services it had pulled from its App store at the behest of China’s authoritarian government”.

We at Bitter Winter have been attacked and hacked since the very day we launched our publication. The Chinese Communist authorities have also tried to intimidate and paralyze us by arresting dozens of our reporters, half of whom are still detained in unknown (to us) places.
Recently, we were informed of the new folly of “Digital Maoism” through which Xi Jinping is establishing and cultivating a new cult of his own personality.

A reinvigorated massive hacker attack on strategic US assets has been signaled from China (and Iran, often times on the same geopolitical side of China and Russia).
Well, once it was Orwell. It is now cyber-Orwell. The target is always freedom, the fundamental human right.
Last updated on February 24, 2019
Posted by Jovan-Marya Weismiller, T.O.Carm. at 14:04