'Think of it as Marxism for the well to do.' Brilliant! 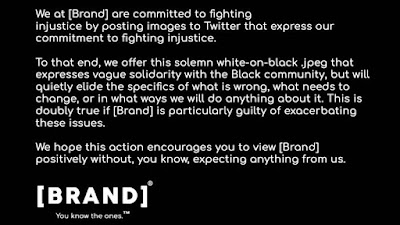 An odd anti=white racism where the perpetrators are lily white.  Some Leftists see this for the dangerous nonsense it is:

A core principle of the academic movement that shot through elite schools in America since the early nineties was the view that individual rights, humanism, and the democratic process are all just stalking-horses for white supremacy. The concept, as articulated in books like former corporate consultant Robin DiAngelo’s White Fragility (Amazon’s #1 seller!) reduces everything, even the smallest and most innocent human interactions, to racial power contests.

It’s been mind-boggling to watch White Fragility celebrated in recent weeks. When it surged past a Hunger Games book on bestseller lists, USA Today cheered, “American readers are more interested in combatting racism than in literary escapism.” When DiAngelo appeared on The Tonight Show, Jimmy Fallon gushed, “I know… everyone wants to talk to you right now!” White Fragility has been pitched as an uncontroversial road-map for fighting racism, at a time when after the murder of George Floyd Americans are suddenly (and appropriately) interested in doing just that. Except this isn’t a straightforward book about examining one’s own prejudices. Have the people hyping this impressively crazy book actually read it?

DiAngelo isn’t the first person to make a buck pushing tricked-up pseudo-intellectual horseshit as corporate wisdom, but she might be the first to do it selling Hitlerian race theory. White Fragility has a simple message: there is no such thing as a universal human experience, and we are defined not by our individual personalities or moral choices, but only by our racial category.

Matt Taibbi, via Ed Driscoll at Instapundit. Go here to read the rest. As Instapundit has noted, in America culture wars tend to be class wars in disguise. The fight against “white supremacy”, almost non-existent in contemporary America except for a handful of powerless crazies, is mainly a way for upper class whites to pour vials of hate on the heads of middle and working class whites, and feel good about themselves as they do so. Think of it as Marxism for the well to do. They get to cosplay as revolutionaries as they demand that people, usually far worse off than themselves financially, give up their “white privilege”. As class was an excuse for Communists in the last century to do terrible things and still feel good about themselves, race today is an opportunity for whites locked into the top levels of our society by birth and going to all the right schools, to feel good about themselves as they conduct what can only be called a class war against whites usually less fortunate in life’s lottery than themselves. This is a true revolution of the haves against the have nots, aided by academic grifters getting rich peddling this truly racist bilge.
Posted by Jovan-Marya Weismiller, T.O.Carm. at 16:53