Why the Latin Mass Matters in the Real World: A Review of Dr. Kwasniewski’s Powerful New Book

At the risk of embarrassing Dr Kwasniewski, I've come to view him as the Michael Davies of the 21st century. 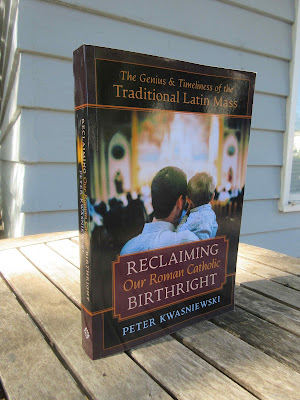 Dr. Peter Kwasniewski’s Reclaiming Our Roman Catholic Birthright: The Genius and Timeliness of the Traditional Latin Mass (Angelico, 2020) is not about “liturgy” in some kind of remote or abstract sense. Rather, it’s about why the concrete reality of the Traditional Mass matters to living and lifestyle, for you and for your children. Why the Latin Mass is a matter of Catholic identity.
In writing this review, I am seeking to pay off a debt I owe to Dr. Kwasniewski. It was largely due to his first Angelico book, Resurgent in the Midst of Crisis (2014), that I converted to the Traditional Latin Mass.
As a priest ordained by Pope John Paul II in 1991, my entire liturgical life before and after priesthood had been the Novus Ordo. During my years in Rome, while studying for my STL in theology at the Lateran and the PhD in philosophy at the Gregorian, I had met only silence about the old liturgy in the universities. It was as if it had never existed.
However, this was not so in my place of residence, the Pontifical North American College, where a convinced and proselytizing minority of my fellow priests sought to win me over to the old Mass. One of them, to whom I shall be forever grateful, even gave me and two others daily training in it one hot summer.
However, the aesthetic arguments they proposed did not sway me to cross the Rubicon. Nor did my first, very unexpected and very moving experience, one summer, of a traditional Latin Mass enacted by a newly ordained priest of the Fraternity of St. Pius X that I attended while in the Swiss Alps. Not even the undoubtedly splendid pontifical high Mass at the monastery of Le Barroux. It just did not seem necessary for the practical job a priest had to accomplish: the salvation of souls through the administration of sacraments whose effectiveness, in my opinion, was perfectly guaranteed by the Novus Ordo liturgy.
And then I began reading articles at Rorate Caeli, notably by Dr. Kwasniewski, followed by the “Eureka!” moment of his book Resurgent. On finishing the last page, I thought, “It matters!”
So, if you think your opinions or your expectations or your social circle or your position or any other factor may be standing in the way of understanding why the Traditional Mass is so important for understanding and living your Catholic identity, I urge you to read the good doctor’s latest book, Reclaiming Our Roman Catholic Birthright, which dismantles prejudices one at a time and explains how the old liturgy works to form the souls of the faithful at so many different levels.
If your mind and heart are attracted to tradition but practical difficulties seem to block the way, such as how to educate children in it, then read Birthright.
This is a highly practical book for several reasons.
Firstly, because of the topics it covers, such as:
• Why attend the Mass of the Ages
• Why it delivers so much even though it demands greater effort
• Why it is the solution par excellence for strengthening self and family to confront the contemporary crisis in Catholicism
• Why there is a connection between adhering to it and being consistently pro-life
• Why it is superior, point for point, to the Novus Ordo (here Kwasniewski tackles and refutes every sort of defense that has been offered for the reform)
• How to answer charges of “aestheticism” and “turning back the clock”
• Why and how the traditional rites educate children
• How to help children enter into the letter and spirit of the Mass
• The power of the old Mass to inspire and nurture vocations
Secondly, because of Kwasniewski’s style. The explanations are crisp, clear, deep, and—refreshingly—blunt. Who he is helps him write as he does: he is an author who is an intellectual with many years of teaching experience, a married man with children, and himself a convert to the Mass of the Ages. How could he not write with clarity, realism, and fire?
It is a book valuable for both laity and priests.
To seminarians I recommend it vigorously. From my time at the Casa Santa Maria of the Pontifical North American College and from having given a five-day retreat in the past year to one of the largest seminaries in the USA, I know first-hand how the majority of seminarians are drawn to the Traditional Latin Mass. Well, this is the book for you because it will deepen the attraction by adding conviction.
Thank you, Dr. Kwasniewski, for giving us this powerful apologia for the great Catholic Mass of the centuries and of the saints.
The book may be purchased in paperback, cloth, or ebook at Amazon or any of its international affiliates, or at your local well-stocked Catholic bookshop.
Fr. William J. Slattery, Ph.D., S.T.L., of the Diocese of Spokane, is author of The Logic of Truth (Leonardo da Vinci, 2016) and Heroism and Genius: How Catholic Priests Helped Build – and Can Help Rebuild – Western Civilization (Ignatius Press, 2017).
Posted by Jovan-Marya Weismiller, T.O.Carm. at 12:00