Disturbing News Trends in Turkey: What if Hagia Sophia Returns to Being a Mosque? 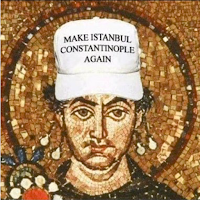 'What if Hagia Sophia returns to being a mosque?' My answer is simple. DEUS VULT!

In recent years, Orthodox Christians around the world have watched as headlines kept appearing on obscure websites that mainstream journalists rarely visit.
Rumors grew that the famous Hagia Sophia sanctuary in Istanbul — a 6th Century wonder of Byzantine Christianity — would once again be claimed as a mosque, after decades of protection as a neutral-ground museum. Gradually, the rumors turned into symbolic actions by the Turkish government of President Recep Tayyip Erdogan suggesting that this strategic move might become a reality.
Recently there was this headline at OrthoChristian.com (all caps in the original headline, along with alternative spelling “Agia”):

The question, of course is this: Is this a news story? Other questions flow out of that: Is this a “religious” media story? Is it a “conservative” media story? One more: Is it a story for hard-news media in Europe, but not America?
Meanwhile, it would be hard — from the Orthodox point of view (I have twice visited Hagia Sophia) — to offer a more distressing overture than the top of that latest OrthoChristian.com report::

As Turkish officials await the court hearing on the possibility of converting the world-famous Agia Sophia Museum back into a mosque, preparations for the change are reportedly already underway.
In this vein, the leader of the Saadet Partisi Islamist political party, Abdullah Sevim, called for Turkey to immediately take action and paint over the faces of the seraphim in the dome of the 6th-century Orthodox cathedral-turned-mosque-turned-museum, reports the Orthodoxia News Agency.
“There’s no need to wait for the decision of the State Council. We’ve already purchased the lime,” Sevim wrote on his Twitter page, calling everyone to join in a Muslim prayer to be held at Agia Sophia by President Erdogan.
The State Council will review the possibility of changing the status of Agia Sophia from a mosque to a museum, thus canceling the presidential decree of 1934 that turned it into a museum in the first place, on July 2.
Other preparations towards converting it back into a mosque are reportedly underway already. According to Turkish historian and writer Ahmet Anapali, more than 75,000 sq. ft. worth of carpets used in Islamic prayers have already been purchased, paid for by a private individual, reports Romfea with reference to the Turkish newspaper Yeni Akit Gazetesi.

These reports led to a recent opinion piece in the Washington Post, written by Asli Aydintasbas, a senior fellow at the European Council on Foreign Relations. The headline: “Why Istanbul’s historic Hagia Sophia could be in a fight against time.”
Here is some crucial historical background about Hagia Sophia from that piece:

For centuries, the terra-cotta-colored building served as the largest church in the Christian world. When Ottomans conquered Istanbul in 1453, they carefully covered the mosaics and turned it into a mosque. In 1934, Mustafa Kemal Ataturk, the founder of the modern Turkish state, turned it into a museum — both as a testament to the country’s new secular principles, but also as a signal of its desire to be anchored to the Western world.
Not surprisingly, Turkish President Recep Tayyip Erdogan now wants to turn it back into a mosque and has instructed aides to find a legal formula. Hagia Sophia has long been a coveted symbol for Islamists who resented Ataturk’s desire for a West-leaning and secular society, but no Turkish government had so far touched his legacy.

Who knows. At some point this might be worthy of mainstream news coverage. Maybe if Donald Trump blasted out a tweet or two? Then again, Orthodox Christians are pretty conservative — in terms of doctrine — so that would probably just be seen as another effort by Trump to rile up believers.
However, the religious-liberty scholar Paul Marshall — for 20 years a colleague at The Media Project — has written an essay for Religion Unplugged that sums up several alarming trends in Turkey, including the reports about Hagia Sophia. The headline: “Turkey Is Moving Toward A Neo-Ottoman Regime With Calls To Convert Hagia Sophia.”
Marshall has combined all kinds of information about developments in Turkish politics and economic policies, many clearly intended to disturb Greece. Like what?

That anger increased when, on June 16, it was revealed that the Turkish military had developed plans for a possible invasion of Greece. The overall plan was named after a famous 11th century Turkish military commander, Caka Bey, and was reportedly part of a PowerPoint presentation by the Turkish general staff for internal planning review.

In terms of Hagia Sophia, here is some crucial information — with specific dates and sources — that U.S. journalists might want to know about:

In 2016, Muslim prayers were held in Hagia Sophia for the first time since 1931, and there have been periodic Islamic rites there since. On March 31, 2018, Erdoğan himself recited the first verse of the Quran there, dedicating the prayer to the "souls of all who left us this work as inheritance, especially Istanbul's conqueror (Mehmet)." In 2019, in perhaps a prelude, the historic Chora church was converted to a mosque.
In its recovery from the COVID-19 pandemic, Turkey had originally planned to reopen its mosques on June 12, but Erdoğan asked that the reopening take place May 29 instead. One reason for bringing the date forward was no doubt part of a general drive to get the economy moving, but the selection of this date suggests that there were also other powerful motives. May 29 was the 567th anniversary of Constantinople’s capture by Ottoman Sultan Mehmet II, so the mosque reopenings would simultaneously be a celebration of the conquest of the Byzantine city.
This perception was reinforced when, on May 27, Ali Erbas, the head of Turkey’s Religious Affairs Directorate, said the public square next to Hagia Sophia would be the location for the first Friday prayer celebrating the opening of the mosques. This location is where thousands gather annually on May 29 to recite morning prayers and ask for the conversion of Hagia Sophia into a mosque.
A few weeks prior to Erbas’ statement, Erdoğan’s own communications chief, Fahrettin Altun, tweeted a photo of Hagia Sophia with the words: “We miss her! But a bit more patience. We will accomplish this together. ...”