Speaking to the Masses

It is mind-boggling when a centre-left, secular newspaper will run an op-ed in favour of the TLM!

Pope Francis' recent attack on the traditional Latin Mass and those who attend and offer it has produced quite the outcry around the world.  Yet another example of the unintended Francis Effect, slapping around faithful Catholics has blown up in the face of the Vatican.  When the Jesuit, left-wing America magazine and normally anti-TLM neoconservative George Weigel both voice public criticism of restricting the freedom to offer and attend Latin Masses, clearly the Vatican roll-out of Francis' hit-job can be considered a massive communications failure based on bad policy and poor planning.

To that end, we all have likely had family or friends with almost no interest in the traditional Latin Mass ask us what on earth is going on recently.  It is a terrific moment to educate -- the ideal time to further grow the TLM movement.  Very few people have publicly defended Francis' recent attack on the TLM.

There are usually two kinds of Catholics with respect to news and current events: those who pay close attention to daily updates, and those who scan headlines or get their news from someone else.  Rorate readers likely fall into the former category; and we commend you for staying educated.  At the same time, while even the mainstream media is interested in the traditional Latin Mass -- an opportunity that does not come often -- we have the chance to speak to the masses (pun intended). 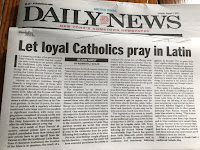 The New York Daily News published this op-ed, which ran online yesterday and in today's print edition.  While it does not necessarily break any new ground for those of us who follow Catholic news closely, it may be useful for readers who wish to share a (hopefully) persuasive argument on the matter.  The Daily News, as you may know, is not a conservative media outlet.

For the benefit of international readers, who may not have access to the Daily News online, the following is the text:

In a stunning rebuke of his predecessors, Pope Francis recently enacted numerous new restrictions on priests offering the traditional Latin Mass — the centuries-old form of the Roman Catholic liturgy that was effectively replaced following the 1960s Second Vatican Council and subsequently revived as an option by Popes John Paul II and Benedict XVI.

Almost no Vatican watchers thought Francis, a long-time critic of those who attend the Latin Mass, would issue such a strong papal document while Benedict remains alive. After all, the 94-year-old Pope emeritus, who in 2007 granted enormous freedom to offer the traditional Mass, still wears a white cassock and lives in the Vatican gardens. In the last 14 years, the number of parishes with a regularly scheduled traditional Latin Mass went from handfuls to significant numbers, with many congregations comprised of young adults and large families. You can find some parishes, like Holy Innocents in Manhattan, that offer the old Mass almost every day.

Now, as a result of Pope Francis’ directive, current priests have to request explicit permission from their bishop and new priests have to get signoff from the Vatican to offer the traditional Latin Mass. Even if clearance is attained, the location of the Mass is in question, the result of a weird sentence in the document restricting “parochial churches” from hosting the old liturgy. Almost no priest I have talked with has any idea what that means, and bishops are currently talking among themselves to see if anyone has a clue how to deal with that vague clause. The new directive is silent on this point.

The sloppiness on the details is a product of what happens when a papal document is obviously written by Italian, liturgical amateurs with a tone of contempt toward those who offer and attend Latin Masses, rather than authors experienced in liturgy and current practices with respect to churches where the traditional Mass is offered. One example is a line mandating the respective Epistle and Gospel readings of a Mass be read in the vernacular. If the authors of the document had any insight as to the normative operation at Latin Mass parishes around the world, they would know those passages are already commonly read in the vernacular from the pulpit following their reading in Latin at the altar.

For now, most bishops caught off guard by this directive — even from the center-left — have extended permission for priests to continue the status quo of offering traditional Latin Masses as planned. One exception is the archbishop of Washington, D.C., who flip-flopped on offering permission for a large Mass, planned months ago with his consent, that would have attracted several thousand people. Still, some bishops on the center-right have even invoked a section of Canon Law to waive their diocese from the entire directive for the good of the faithful, a growing trend.

What is missing from the new restrictions from Pope Francis are the two virtues he has lectured Catholics on since becoming Pope in 2013: mercy and charity. The irony is rich, that receiving communion has become a right for anyone who dissents from church doctrine, while Catholics who prefer the form of the Mass that dates back hundreds of years may not be welcome at the church near their home.

The organization that stands to benefit the most from any diocesan prohibitions on the traditional Latin Mass is the Society of Saint Pius X (SSPX), a group of priests that has an irregular status with Rome since the vernacular liturgy was created following the Second Vatican Council. Paradoxically, Pope Francis has granted these Latin Mass-only priests universal permission to offer sacraments such as confession and matrimony, following gestures by Benedict XVI to grant them more regular relationships with the Vatican such as seminary visitations appointed by Church officials. Francis’ new directives attacking Latin Masses at neighborhood parishes will undoubtedly increase the number of Catholics leaving their local churches to attend Mass offered by SSPX clergy. It is unclear if the authors of the papal document gave any thought whatsoever to this outcome.

Then again, it is unclear if the authors gave much thought to anything of substance besides an obvious act of vengeance toward Catholics who attend the traditional Latin Mass. In fact, even leading voices from the left-wing of the Church were surprised as to just how far the directives went. Massimo Faggioli, a Villanova University professor who is often quoted defending Pope Francis, reacted to the Latin Mass attack by stating, “This is more radical than most of us expected.”

The vindictive tone from Pope Francis and its Mass confusion have caused chaos in many dioceses in the last several days. Don’t be surprised if more bishops look at their flock of practicing Catholics and side with them instead of an unnecessary act of intolerance from the Vatican.

Wolfe is a contributor to Rorate Caeli, a traditional Catholic blog.