Found on a friend's Facebook page. May the soul of Haile Selassie rest in peace. 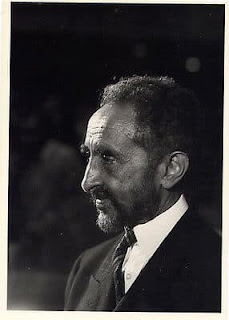 46 years ago today, the last reigning Emperor of Ethiopia died at the hand of the Derg, and Ethiopia continues to pay the wages of this great crime.
When Ras Tafari Makonnen was named Crown Prince and Regent for Empress Zewditu in 1916 taking on state responsibility, Ethiopia had schools, hospitals, roads, telephone and telegraph posts, and towns that had electricity that could be counted on a few fingers. Every surrounding state was under the rule of a foreign colonial power, Ethiopia was landlocked and at the economic mercy of these foreign powers. Ethiopia’s regions were ruled by local princelings, nobles or warlords, each with a personal army. They ruled their provinces as personal fiefs and the central government had limited capacity to regulate their actions. Ethiopia’s central Military was a ill equipped and small. The modern government structure set up by Menelik II was dominated by increasingly conservative aristocrats who resisted further modernization. In the decades that followed, the Emperor worked hard to change all of that. He set up a modern civil service based on merit and implemented it both in the central government and most of the provincial administrations. He raised up humble born but well educated men to the highest and most powerful posts, stripped the regional nobility of their private armies, and modernized and professionalized the Armed forces. Under him Ethiopia developed a powerful Army, Imperial Guard, Air-force and Navy. Early in his reign he fought a fascist invasion and was driven into a five year hardship filled exile. He returned in triumph to restore independence at the head of a force backed by the British. He then skillfully thwarted British plans for a protectorate and the partition of his country, instead managing the federation of Eritrea to Ethiopia and Ethiopia's access to the sea. He built roads and hospitals, established the first university donating his own palace to be its main campus. Above all he invested in the education of his subjects, touring schools, handing out school prizes personally, and paying for the higher education of many who could not afford it in prestigious foreign institutions. He did all this within the limited means of his government without amassing massive debts. After over a millennia of Ethiopia’s Orthodox Church being under a Coptic Egyptian Archbishop appointed in Alexandria, Emperor Haile Selassie and those working with him negotiated autocephalous status for the church and the canonical establishment of Ethiopia’s own Patriarchate. The Emperor also worked hard to support the emerging states of Africa as they gained independence, and struggled to make sure the Organization of African Unity (now the African Union) was established. He was revered internationally, his small but regal figure inspiring a respect for Ethiopia, it’s ancient throne, and its people that we have not enjoyed since. This is but a small drop of all this man did for his people. He worked endlessly and tirelessly until the end.
In 1974, in the frailty of old age, he was driven off in a baby blue Volkswagen bug, as "progressives" screamed "thief" at the heir of the oldest royal line in Christendom. When revolution inspired by foreign philosophies and ideologies had erupted around him, and his officials were rounded up and locked away, he did not muster his military to crush the revolution as he could have, nor did he depart for exile as other monarchs around the world had. He chose to leave quietly with his immense dignity intact.
Recently the Emperor has begun receiving a fraction of the credit and honor that he deserves. The African Union erected a long overdue monument to him with the respectful participation of the Ethiopian government(something that would have been unimaginable just two years before). In July 2019 the Ethiopian Embassy in Washington DC hosted an event in honor of the anniversary of his birth. It is a start. He deserves a public statue in the heart of his capital (not just in a restricted diplomatic compound). The places and institutions which he established and bore his name which were stripped of them should be restored to the name they were established with. Haile Selassie I University, Haile Selassie I Avenue, etc. Above all his unparalleled contribution to the building of modern Ethiopia should be publicly and unequivocally acknowledged. But more recently, those ignorant of all but lies and hate toppled the statue of his father Ras Makonnen in Harrar, and shattered his bust erected in a park in Wimbledon, UK. The ideas of a nationhood and civic society beyond ethnic and religious distinctions, and a pan-Africanism that sought to encourage unity beyond borders, tribes, creeds, and regions, were what he championed. They are replaced today by narrow ethnicism, xenophobia, attempts at ethnic and religious cleansing, historic revisionism meant to divide, and bloodlust. Little do the figures who lead and follow this movement realize that these philosophies and actions only serve to make them small in the eyes of history, and the Emperor a giant.
May God rest the soul of Haile Selassie I, Emperor of Ethiopia, and bring peace to the land he worked so hard for.
Posted by Jovan-Marya Weismiller, T.O.Carm. at 18:23