Today is the Feast of the Placing of the Precious Sash of Our Most Holy Lady the Mother of God in Calcoprateia.
✠✠✠✠✠ 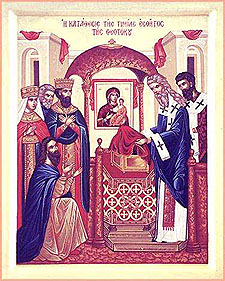 The Placing of the Venerable Belt of the Most Holy Theotokos in a church of Constantinople’s Chalcoprateia district took place during the reign of the emperor Theodosius the Younger. Before this, the holy relic, entrusted to the Apostle Thomas by the Mother of God Herself, was kept by pious Christians at Jerusalem after Her Dormition. During the reign of Emperor Leo the Wise (886-911), his wife Zoe was afflicted with an unclean spirit, and he prayed that God would heal her.

The empress had a vision that she would be healed of her infirmity if the Belt of the Mother of God were placed upon her. The emperor then asked the Patriarch to open the coffer. The Patriarch removed the seal and opened the coffer in which the relic was kept, and the Belt of the Mother of God appeared completely whole and undamaged by time. The Patriarch placed the Belt on the sick empress, and immediately she was freed from her infirmity. They sang hymns of thanksgiving to the Most Holy Theotokos, then they placed the venerable Belt back into the coffer and resealed it.

In commemoration of the miraculous occurrence and the twofold Placing of the venerable Belt, the Feast of the Placing of the Venerable Belt of the Most Holy Theotokos was established. Parts of the Holy Belt are in the Vatopedi monastery on Mt. Athos, in Trier monastery, and in Georgia.
Troparion — Tone 8

Ever-Virgin Theotokos, protectress of mankind, / you have given your people a powerful legacy: / the robe and sash of your most honoured body which remained / incorrupt throughout your seedless childbearing; / for through you time and nature are renewed! / Therefore we implore you: “Grant peace to your people and to our souls great mercy!”
Kontakion — Tone 4

Today your flock celebrates the enshrinement of your precious sash, / and it earnestly cries out to you: / “Rejoice, O Virgin, boast of all Christians!”
Posted by Jovan-Marya Weismiller, T.O.Carm. at 00:05