What a Difference a Bishop Can Make.

Fr Zed muses on the need for true Shepherds who will inspire and lead the laity against the forces of evil in the world.

From Chess.com today, the Daily Puzzle is from one of the 18th c. “Modenese Masters”, Domenico Ercole del Rio (+1802).  There is an elegant forced mate here in 3 but it requires a bold sacrifice.  White to move. 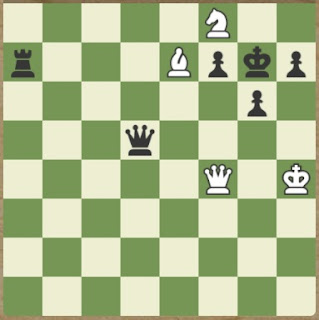 What a difference a bishop can make.

St. John Fisher was a lone bishop who stood up and said, “No”.   That was a Bishop’s Gambit, I guess, that didn’t in the end work for the Church in England, since they still wound up with the Church of England.  St. John Fisher now lives in the glory of the Trinity to intercede for us in this time when the State will be increasingly hostile to all things Christian.  Fisher, not Fischer.

Bl. Clemens von Galen wasn’t the only German bishop to stand up to Nazism in the 1930’s and 40’s (von Preysing, Frings), but he was a particularly visible prelate.  He led the Catholic protest against the euthanasia program.   Do you suppose von Gallen would have given Communion to baptized Catholic Josef Goebbles?  Hitler forbade Goebbles from abandoning the Church for tactical reasons.  That’s Galen, not Gallen.

We need some hard-identity Catholicism from bishops… not whatever the hell it is they are into.    Does it seem to you at all that when they deal with politicians who promote evils like abortion it’s always endless dialogue, soft words and nuanced phrases as if they had some chance to penetrate those obsidian hearts.

But that’s also the way the bishops talk to each other when they meet.

I’m all for decorum.  I don’t think we need constant belts in the chops à la St. Nicholas and Arius at the Council of Nicea.  After all, that belt in the face didn’t seem to change Arius mind.  Perhaps if he had hit him harder?  Twice?   I digress.

My point is that it seems like the bishops talk to each other in the same way that they talk to pro-abortion politicians.  Their yes is not really yes.  Their no is not really no.  Hence, they have no effect on the herd as they move closer to the cliff.

Celebration of the traditional Roman Mass is one of the most instructive things a priest or bishop can do, for the sake of his Catholic identity as a sacerdos.  You learn things from the rite that simply are not evidenced in the post-Conciliar form.

In the wake of Traditionis custodes, I implore, I beg bishops out there to learn and to celebrate the traditional Roman Rite.

Second, you will give immense comfort to the most marginalized members of your flock, something I should think you would want to do.

Here’s a tip, which I suspect is at the core of why many bishops hesitate to get involved with the TRADITIONAL Roman Rite.

Your Excellencies, you have been formed in a Novus Ordo liturgical practice.  With its constant options – left to you as priest and bishop – and with its exhortation to give extra little impromptu pep talks at certain points, and with its ubiquitous versus populum arrangement, the psychological pressure on you as celebrant is great.   Facing them, everyone looking at you to do the next thing, gives the Novus Ordo celebrant, priest or bishop, the overwhelming sense that the liturgical action, carrying it forward, depends entirely on YOU.

That is one of the terrible costs especially of versus populum celebration, perhaps the single most damaging thing to our Catholic identity that resulted after the Council.

Because your experience, Your Excellencies, is wholly steeped in this priest-centric ars celebrandi, I suspect that when you see the photos of traditional Pontifical Masses, or even see Solemn or Low Masses in the Traditional Roman Rite, you quail a bit inside.  You don’t know how to do those things and, as a bishop, you don’t like not knowing what to do.  You are loathe to have people see or think that you don’t know what to do because, in the way you were trained and then seasoned, it all depends on YOU to carry the action forward.   You see all those gestures, the language, the ad orientem posture, and you can’t get your head around how YOU are going to be the driving force to animate the liturgical action.

You are not the one who carries it forward.  The Rite itself takes care of that.  All you have to do is be docile and follow, rather than lead.  That’s where your freedom to pray is centered.  That’s where you discover yourself as victim along with being the priest who offers sacrifice.

If being celebrant for a Pontifical Mass looks intimidating, I can assure you that it is probably the easiest liturgical role you will ever have.

You are surrounded by ministers who play their parts.  There is an MC and Archpriest to lead you, literally by walking in front of you, and to point at every text you have to read.  Sure, it’s in Latin, but don’t you think you ought to be able to say prayers in Latin, as a bishop of the Latin Church?  And most of them are silent, anyway.    If you just let yourself be guided along, you will be in the right place at the right time to do the right thing.

It doesn’t depend on you to animate the liturgy.  Just let the sacred ministers do their job.  Just let it be.  Just be.

As far as getting you all gussied up with extra vestments and gloves and different miters and so forth, again, this is a demonstration that it really isn’t all about you.

That may seem counter intuitive, but it hearkens to the fact that the priest is also the victim being sacrificed.

Think of yourself as a lamb being raised for the Temple.  You are cared for very well so you don’t have flaws, pampered even, right up to the point that they open your throat with a blade.   When all the ministers gather around and literally undress and dress you, you are the priest being prepared to offer sacrifice and the victim about to be sacrificed.

What have we priests and bishops lost over the decades by not saying the vesting prayers?   Has this affected our identity and our ars celebrandi?

For example, Your Excellencies, when the ring is put back on your finger, you say: “Adorn with virtue, Lord, the fingers of my body and of my heart, and place upon them the sanctification of the sevenfold Spirit.” Fingers “of my heart”! Very poetic. Each object has its meaning.  The texts of the vesting prayers, carefully sculpted over centuries of spiritual experience and reflection, are dense in meaning. They breathe biblical images.   When you sit there and endure the ministers putting your shoes on, running against the American grain in particular, be patient and meditate on the prayer for the buskins, which cites Eph 6 and Ps 60: “Shod my feet, Lord, unto the preparation of the gospel of peace, and protect me under the cover of thy wings.”   The Enemy hates you and what you are about to do in saying Mass.  Do you pray for protection against diabolical attack?   That’s what you ask for in putting on the amice: “Place upon me, O Lord, the helmet of salvation, that I may overcome the assaults of the devil.”

You do believe in the Devil…. right?  Do you think there’s a chance that the Enemy is trying to undermine you?

Are you ever discouraged or sorrowful in your mandate?  The maniple prayer offers solace: “May I deserve, O Lord, to bear the maniple of weeping and sorrow in order that I may joyfully reap the reward of my labors.”

I go on at length because the riches available to you are so very great and we, the Catholic flock entrusted to you, need for you to be able to carry out your role so that we can carry out ours.  We don’t need half of it from you, we need all of it.  We need you to be traditional so that we also can be who we are supposed to be in our lives.

A bishop can make all the difference.  But it requires a bold sacrifice.