The presence of Old Testament Saints is brought home to me as I share the Feasts of the Ukrainian Greek Catholic Calendar every day.

One of the many elements of the Eastern Church which I have always held in fond regard is the prominence that we find there for the Old Testament righteous. Within the Byzantine liturgical calendar for instance, a number of Old Testament prophets and righteous have particular feast days in which these holy men and women are commemorated. For example: Abraham (Oct. 9), Moses (Sept. 4), Malachi (Jan. 3), Zechariah (Feb. 8), Job (May 6), Amos (June 15), Isaiah (May 9), Hannah (July 23), to name a few. Also to be found within the Byzantine Hours are a number of canticles, such as the "Song of Moses", "the Prayer of Isaiah", the "Song of the Three Holy Children" and so on.
Of course, within the Latin church, this tradition is also not absent from the calendar. For example, the calendar of the usus antiquior commemorates the Seven Holy Maccabees on August 1st, and within the Carmeilte liturgical tradition, St. Elias (Elijah) is commemorated as a feast day of importance on July 20th.
Also worth mentioning is the fact that in the litany of the saints we invoke "Omnes sancti Patriárchae et Prophetae" and within the Roman Canon, Abel, Abraham and Melchisedech are also specifically mentioned: "Deign to look with propitious and serene countenance on them, and to accept them, as you deigned to consider acceptable the gifts of your just servant Abel, and the sacrifice of our Patriarch Abraham, and what your high priest Melchizedek offered you, a holy sacrifice, a spotless victim." In addition to all of this, we also find these Old Testament figures mentioned all throughout the Martyrologium Romanum.

Beyond the liturgical calendar, artistically speaking one can frequently find the presence of Old Testament figures ornamenting the walls of our churches. Returning again to the Eastern churches, Old Testament figures extend into the iconographic tradition, inclusive of specific placements for these icons within the iconographic ordering of their churches. Constantine Cavarnos of the Institute for Byzantine and Modern Greek Studies speaks to the point:

In the circular zone [of the dome] around the figure of Christ Pantocrator is depicted -- if space allows -- a choir of Angels. Often, between them are painted the Theotokos on the east side, and Saint John the Baptist on the west.

Below this zone, in the spaces between the windows of the drum of the dome, are shown the Prophets, through whom, as the Creed says, God spoke to men: Moses, David, Solomon, Isaiah, Jeremiah, Ezekiel, Daniel, and others. The number of Prophets depicted varies according to space available. In some churches, there is one Prophet between each set of two windows; in others, two or three...

If the circular base of the drum of the dome is suitable, various Righteous personages of the Old Testament are represented in medallions (busts enclosed in circles) -- for example, Abel, Abraham, Noah.

Within the sanctuary of Byzantine churches, one might also find Old Testament narratives depicted on the walls. Those depicted are those which are classified as "types" of the Eucharistic Sacrifice. A good example of such typology would be the narrative of the sacrifice of Isaac by Abraham, where Abraham was prepared to sacrifice his own son. 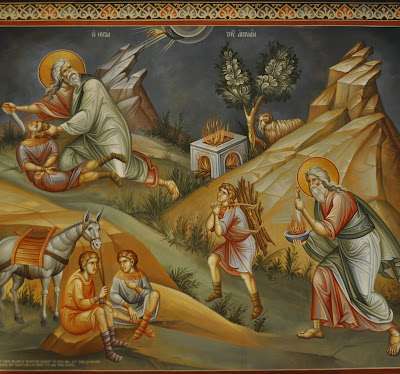 Finally, icons of the Old Testament prophets might also be depicted within the narthex of Byzantine churches, or on the iconostasis. Here are some examples of such icons.


Within the Latin West we can also find similar examples, particularly historical examples from the middle ages. Here, for example, is the Sacrifice of Isaac by Abraham as depicted in San Vitale in Ravenna: 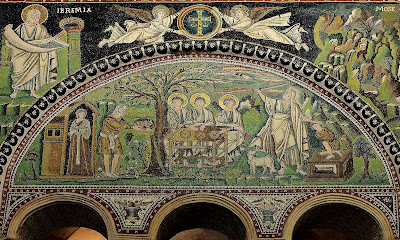 Another example that is furnished within San Vitale is Moses and burning bush as detailed in Exodus 3: 1-5.  ("Now Moses fed the sheep of Jethro his father in law, the priest of Median: and he drove the flock to the inner most parts of the desert, and came to the mountains of God, Horeb. And the Lord appeared to him in a flame of fire out of the midst of a bush: and he saw that the bush was on fire and was not burnt. And Moses said: I will go and see this great sight, why the bush is not burnt. And when the Lord saw that he went forward to see, he called to him out of the midst of the bush, and said: Moses, Moses. And he answered: Here I am. And he said: Come not nigh hither, put off the shoes from thy feet: for the place whereon thou standest is holy ground.") 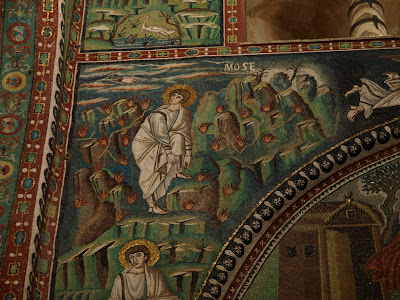 The Basilica of Santa Maria Maggiore in Rome contains a number of mosaics of Old Testament scenes as well. Here are just two of them.


Here too we see a reference to the story of Jonah and the whale depicted on this medieval ambo in the duomo of Ravello. (For those wondering about the connection with the gospel, the story of Jonah is a prefigurement of Christ and His death and resurrection: "Then some of the scribes and Pharisees answered him [Jesus], saying: Master, we would see a sign from thee. Who answering said to them: An evil and adulterous generation seeketh a sign: and a sign shall not be given it, but the sign of Jonah the prophet. For as Jonah was in the whale's belly three days and three nights: so shall the Son of man be in the heart of the earth three days and three nights." -- Matt. 12:38-40) 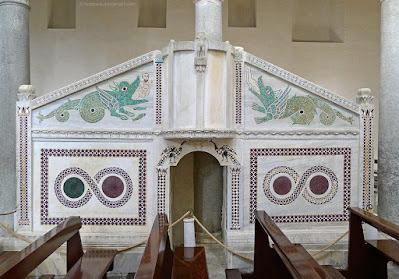 Finally, here is an example of a humeral veil which includes images of the Sacrifice of Abraham and St. Elias. 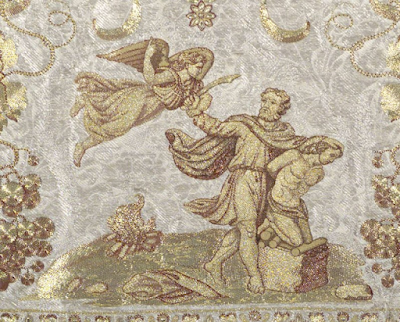 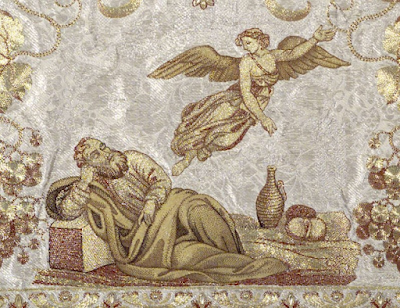 Numerous other examples are also to be found elsewhere of course.
Some might wonder about this emphasis on the Old Testament or might even find it (regrettably) foreign. After all -- they might find themselves thinking -- has this not passed and are we not in the time of the new covenant? Obviously we are in the time of the new covenant, but here too we should adopt an understanding that is based upon continuity and not rupture and we must further understand that there is a relationship which connects the two.
As St. Augustine famously said: "In the Old Testament the New is concealed, and in the New the Old is revealed..."
Posted by Jovan-Marya Weismiller, T.O.Carm. at 12:00