From the "Natural Law" File: How to Indoctrinate 2–7 Year Olds Into the Transgender Ideology…

The evil is palpable! But remember, it's all in our minds. It's all just 'live and let live'. There's no attempt at corrupting children and no culture war.

From The Motley Monk

Getta load of this:

The clip is from Disney Junior Channel’s “Muppet Babies” new and improved version of Cinderella called “Gonzo-rella”!
It features Gonzo—aka “The Great Gonzo” or “Gonzo the Great”—the Muppet characterized by low self-esteem, awkward behavior, non-animal-like appearance, zany and bombastic appreciation for life, and eccentric passion to perform. Gonzo’s species is ambiguous and self-identifies as a “whatever”—a “non-binary kind of gender”—at least when it comes to choice of bathrooms in the Muppet comic strips.
“Gonzo-rella” is a 2021 episode of Muppet Babies that parodies the fairytale Cinderella...and indoctrinates young people into the transgender ideolgy.
After being told boys are supposed to wear knight costumes, Gonzo wants to wear a dress. So, the “fairy ratfather” grants Gonzo’s wish to become a “princess”!
With Gonzo being “the princess who came to your ball tonight,” Gonzo places the glass slipper on his foot and transforms into “Gonzo-rella.” After Miss Piggy asks why Gonzo didn’t tell them, Gonzo replies:

Because you all expected me to look a certain way. I don’t want you to be upset with me... but I want to be me.

Who’d have thunk it? Gonzo is a cross dresser!
According to the episode’s producer, Tom Warburton, the idea behind this particular episode is that “Gonzo is always 200% Gonzo 347% of the time” and the goal was that Gonzo would “inspire kids watching to be 347% of themselves in their own way, too." Warburton added “…early on the plan was to make Gonzo appear in a skirt as if it were no big deal….”
Awwwww!! Isn’t that nice? A cross-dressing Gonzo-rella...something every young child should emulate and celebrate! Kudos to all those parents who willingly shell out the $$$s it takes so their children can be entertained in this way and join in the celebration! 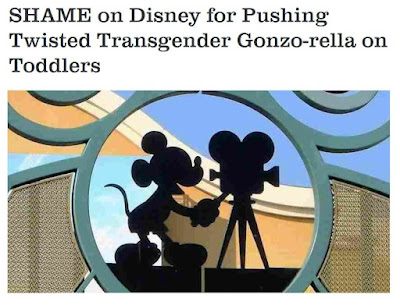 The bottom line: Deliberately introducing 2- to 7-year-olds to transgender confusion “as if it were no big deal” preys upon their natural innocence while concurrently seeking to indoctrinate them into the transgender ideology. Upon this foundation, so-called “sex education” programs in the nation’s public schools can promote the dual ideals of diversity and inclusion....so elementary and secondary school students can “be what I want me to be.”
Not one word about what God created His children to be and to become!

Want to do something about it?

Take a cue from the liberal progressives on the political Left: Become an activist!

Join the folks at TFP Student Action to agitate Disney to remove Gonzo-rella from it platform and end its blatant attempt to indoctrinate young people into accepting the “normalcy” of transgenderism.

A side bar: As bad as the ideological indoctrination of young people is, what’s truly offensive is the caricature of cross-dressers this Muppets episode communicates. Apparently, they all exhibit low self-esteem, awkward behavior, an odd appearance, zany and bombastic appreciation for life, and eccentric passion to perform. And, because they don’t look the way people expect them to look, they make people upset when they don’t look that certain way. All cross-dressers want to do is “to be me.”
What happened to “diversity”?
Posted by Jovan-Marya Weismiller, T.O.Carm. at 16:22