This may be Canadians' last chance to turn things around and put Canada on the road to once more being 'The True North, Strong and Free'!

From Everyday For Life Canada 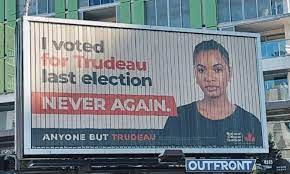 The National Citizens Coalition has started a campaign to tell Canadians to elect, "Anyone but Trudeau." We agree. On September 20, 2021, Trudeau and the Liberals must be voted out of office. They have done too much harm to the nation and don't deserve another term, especially given the fact that it will over $600 million tax dollars for an election we didn't need. Canadians are forced to go to the polls because Trudeau wants a majority. His ego needs it.

Here's the evidence used by the National Citizens Coalition to make a convincing case to kick Trudeau out of office:

Bad behaviour shouldn’t be rewarded.
Canada is now in an election that only Trudeau wanted.

While you’re taking summer holidays, harvesting your crop in a tough year, or trying to get your business back on its feet after repeated lockdowns, Trudeau is making a grab for power, hoping you’re not paying attention, to try and win back his coveted majority government.

But he’s got a big problem. We now have the power — not him.

The WE charity scandal.

Trying to censor your internet.

Don’t let him get away with it. Don’t reward bad behaviour.

This election: vote ANYONE but Trudeau.”

The National Citizens Coalition has released a video to spread the message. Do share the video with family and friends. Canada cannot afford another Trudeau Liberal term.
Posted by Jovan-Marya Weismiller, T.O.Carm. at 16:04