Sherlock Holmes and the Pachamama Affair

I have fallen behind on Eccles' musings for a few days, so let's catch up! Remember, Eccles writes satire!

I have described elsewhere how my friend Sherlock Holmes had on an earlier occasion been consulted by the Holy Father in order to track down the mysterious Marcantonio Colonna. One October day we were summoned again to the the papal presence in order to investigate the Crime of the Century. 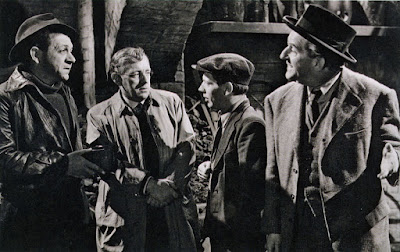 "Right, Zuhlsdorf and Voris will keep us covered, while Donnelly and Taylor Marshall knock off the idols. We'll meet at the Tiber."

After offering us a humble glass of indigenous Amazon water, Pope Francis explained the problem to us. "Mr Holmes, only you can help us. Last night thieves broke into the Church of Santa Maria in Traspontina, removed four idols of the Blessed Pachamama (here the Holy Father knelt down and kissed the ground) and threw them into the Tiber."

At this point I was so shocked that I sipped at my indigenous drink and immediately felt a sharp pain in my tongue. Removing the piranha fish that had been swimming in the glass of Amazon water, I coughed a few times, and listened while the Successor of St Peter gave us our instructions.

"Do you not have replacement idols?" asked Holmes. "I saw traces of Brazilian sawdust on the floor when I came in, which suggest that an idol-making factory is somewhere nearby. I have written a monograph classifying six hundred varieties of sawdust, and these fragments clearly came from the deadly Hummes tree of Brazil."

"Oh yes, we have a whole shed full of the idols," explained Francis. "We shall be sending one to every parish in the world. But it is important for the prestige of the Synod that we recover the missing idols and place them in St Peter's Basilica." 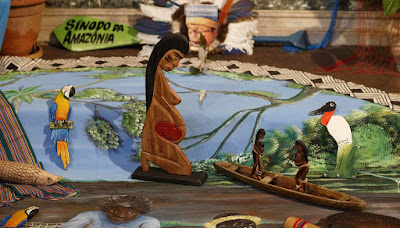 Coming soon to every Catholic church!

We went into the garden, and I remarked to Holmes, "That's a very strange-looking garden-gnome standing on top of the compost-heap. Or is it another pagan idol?"

"I think not, Watson," replied my friend. "One can see that it is moving its lips."

As we approached, we could hear the gnome talking to himself. "Hail Pachamama, Our Lady of the Tiber! Those fascist, alt-right, racist, anti-semitic, Hitlerite, conservative, neo-Nazi, fascist, Brexiting, cat-torturing, thieving, baby-snatching, Telegraph-reading, criminal fascists have committed the Worst Crime in the World! But I will be avenged on the whole pack of you, or my name isn't Austen Ivereigh the Caped Crusader!"

We promptly turned round and walked away. 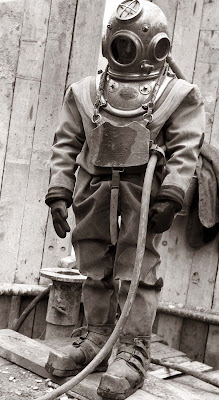 Massimo Faggioli joins the
hunt for the missing idols.

Holmes and I went down to the Tiber bridge from which Pachamama had received her early bath - now renamed St Pachamama's Bridge - and looked for clues. Would the idols have sunk into the mud, or would they be drifting out to sea, like a small flotilla, wending their way back to the shores of South America? There were no clues, and the crime seemed to be motiveless. What Catholic could possibly object to the demotion of the Trinity, the Virgin Mary and the saints, and their replacement by a smelly old lump of wood? Only the worst extremist Genghis Khan-following fascist sedevacantists, as little Austen might put it. 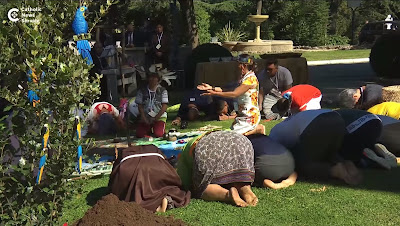 Bowing to Pachamama. Catholic worship at its best.

After a detailed search of the neighbourhood, Holmes and I finally stumbled across a quaint Italian shop, which advertised "LITURGICAL SUPPLIES. Puppets, statuettes, idols, and dolls. All your Catholic needs supplied here." Disguising ourselves as indigenous Amazonians (those feathers really tickled), we went in and asked to see something "spiritually nourishing". There, sitting on a shelf, were four muddy idols, which were clearly the missing Pachamamas.

"I do not wish my name to appear in this case," said Holmes. "Let us alert Inspector Ploddo of the Flying Squad, and allow him to take the credit for this discovery."

And so it was. Following Inspector Ploddo's advice, the Pachamama idols appeared in a place of honour in St Peter's, the following Sunday. Inspector Ploddo was there, ready to arrest anyone seen trying to liberate them. Indeed, the Holy Father had organized a "Bring your own idol for blessing" service, to which I took along my own ten-foot statue of Moloch.

Holmes was not present. Bored by the whole affair, he had retired to his chamber to inject himself with another 7 per cent solution of Coccopalmerio.
Posted by Jovan-Marya Weismiller, T.O.Carm. at 18:01