Eccles takes a look at the denial of Holy Communion to a certain 'I'm opposed, but...' baby killing politician.

It is reported that Senator Joe Bidet, best known to British readers as the man who was so desperate that he plagiarised the speeches of Neil Kinnock (silver medallist in the General Elections of 1987, 1992, forced to resign from the European Commission in 1999) has been denied Communion a second time - this time by Fr James Martin LGBTSJ.

Said Fr Jim, "Obviously Joe's passionate support for abortion, which after all is only the mass murder of children in the womb, would not be enough for him to be considered as bringing scandal on Church, promoting evil, and in an way making him the sort of person who needs to repent of his evil ways before presenting himself for Communion. No, his conduct is far worse in that he was seen using a plastic straw, in clear contravention of the teaching in Laudato Si' by my dear friend Pope Francis." 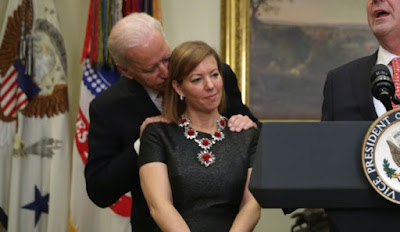 Joe Bidet consoles himself by chewing
on a young lady's hair.

Bidet himself is shocked at his rejection by Sunny Jim, and was said tonight to be considering his position. Could he really stand for the Presidency of the United States, in competition with such holy figures as Bernie Sanders and Elizabeth Warren, when he had been publicly declared - by one of the leading Catholic teachers of our generation - to be living in a state of sin? So what if Bernie sleeps in a coffin and drinks the blood of virgins, or Elizabeth likes to scalp passers-by? Compared with Joe's plastic sins, these are trivial hobbies.

James Martin himself is hoping to build bridges to Bidet: he has been praying hard to Pachamama that Joe's heart will be softened and that he will destroy his vast collection of plastic straws (in an ecologically sound manner). We can but hope that Bidet will do this, and be welcomed back as a Catholic in good standing. And nuts to the dead kids.
Posted by Jovan-Marya Weismiller, T.O.Carm. at 18:52