Christ Is King! In the Here and Now and the Hereafter!

My good friend, Vox Cantoris's post for the Feast of Christ the King. 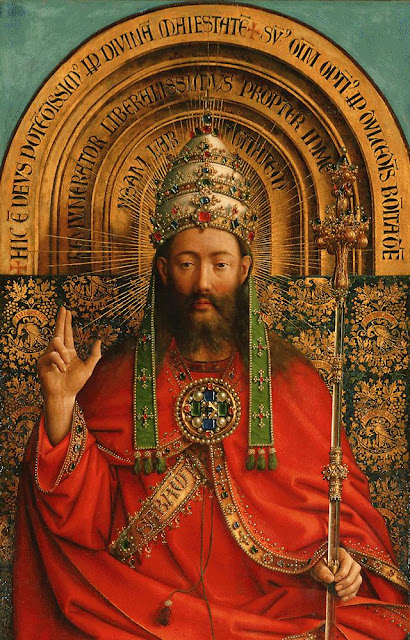 This last Sunday in October in the real Roman Rite, is the Feast of Our Lord Jesus Christ, the King. In the modernist rite it was moved to the last Sunday of the liturgical year in just one more of a flurry of liturgical changes issued by Pope Paul VI in his motu proprio Mysterii Paschalis.

At this time of year in both the traditional and revised liturgy, the Mass begins to focus on the four last things and the eschatological theology that is a reality for humanity. This last Sunday of October was the date chosen for this relatively new Feast, it was instituted by Pope Pius XI in his 1925 encyclical letter Quas Primas in response to growing nationalism and secularism and to the radical and violent anti-Christian secularism of communism. The title of the feast was "D. N. Jesu Christi Regis" (Our Lord Jesus Christ, King) and preceded the Feast of All Saints and then All Souls, intentionally. Christ comes as King, is joined by His holy Saints and then all the Holy Souls, where He reigns for eternity. The last Sunday in October is also known in protestant circles as "Reformation Sunday" and the Pope was providing with clarity, the Social Kingship of Christ in this world through the One, Holy, Catholic and Apostolic Church and to reject the blasphemy, apostasy and heresy of Martin Luther.

[In this year, 2016, we will witness the very Bishop of Rome himself travelling to Sweden to praise Martin Luther and commemorate the so-called "reformation" but more appropriately, revolution. Luther's actions have led millions of souls to Hell and the secular result is revolution through freemasonry, illuminism, communism and secular humanism.]

Today, in 2019 we have seen the alleged Vicar of Christ close a Synod that saw the worship and bowing down to pagan gods and a destruction of the priesthood by the beginning of the end of celibacy and the ordination of women. The devil has taken over the visible church and papacy.

All coincidental, to be sure. Not with Bergoglio, it is all well-planned.

Liturgically speaking, the sung Proper of the Mass, the Introit, Gradual, Alleluia, Offertory and Communion of both Missals are the same. The Collect, Secret/Super Oblata and the Postcommunion are quite different and Father Z takes these apart and highlights the change emphasis as a result of these changes.

An unfortunate reality is the rupture of dates, never asked for or anticipated by the Council Fathers, but nonetheless, accepted.
Pope Paul VI's argument change has some sense to it, Perfectly so, if it had not already existed on the calendar on the Last Sunday of October. Christ, comes as King at the end of time symbolized by the end of the Church year. However, Pope Pius XI had a reason for instituting this feast and if he believed that it was the eschatological dimension that was necessary to associate with it, he would have done so. That eschatological event is the Gospel for the Last Sunday after Pentecost regardless and it flows directly into that of the First Sunday of Advent so the debate is moot, it is there. The feast was instituted to tell us, now, in this secular world that Christ is King of the Social Order in the here and now, not just in that which is to come.
In the last paragraph of Father Z's article while finding it hard to "find fault" with the new prayers he goes on to write that

"The change of placement of the feast and the change of theology of the prayers probably reflect the soft approach to Communism adopted by Rome in those years, called ostopolitik."

When we compare the prayers, there is a clear reduction of emphasis on "triumphant language and imagery " It was as if "the writers of the newer prayers did not want to give the impression that Christ was to be accepted as Lord and King by political entities in this earthly existence."

It is truly unsettling that one Pope would come along only 45 years later and change what a previous Pope had instituted  This is what we have endured - a tinker, tinker mentality that had nothing to do with the Second Vatican Council or its Constitution on the Sacred Liturgy.

Somebody around the Vatican thought that they had a better idea and they convinced a Pope that it was, just like the Octave of Pentecost. Yet, even to this  day, there are those who still attempt to uncrown Him.

2019 - Now we have "Francis" a man who by his very action most particularly seen these last few weeks has dethroned Christ. Remember this friends, as Paul VI undid in one moment the simple act of changing this feast, know that in one day, one holy pope will undo all the error, blasphemy, words and works of this Bergoglio.