Under Pressure, UK to Reconsider Asylum Application of Iranian Christian

Good news! BTW, the Home Secretary, who's responsible for this bollocks, is named Sajid Javid!

“The Home Office have agreed to withdraw their refusal and to reconsider our client’s asylum application, offering us a chance to submit further representations. A good start, but more change is needed”, the Iranian’s caseworker, Nathan Stevens, tweeted March 22.

Stevens added that he hopes “there will be real change though as it isn’t all about this one case; there’s a much wider problem to be addressed here.”

The immigration caseworker had tweeted photos March 19 of the Home Office’s letter explaining its reason for refusing the convert’s asylum claim, commenting: “I’ve seen a lot over the years, but even I was genuinely shocked to read this unbelievably offensive diatribe being used to justify a refusal of asylum.” 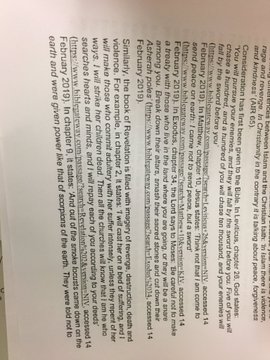 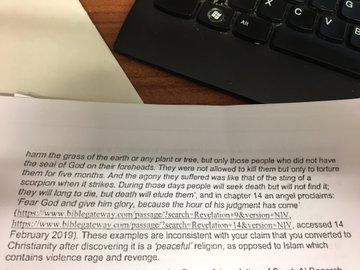 Excerpt from a home office reasons for refusal letter for a convert to Christianity. I’ve seen a lot over the years, but even I was genuinely shocked to read this unbelievably offensive diatribe being used to justify a refusal of asylum.

The asylum seeker had noted in his 2016 application that among his reasons for converting was that Christianity talks of “peace, forgiveness and kindness” while “in Islam there is violence rage and revenge.”

The refusal letter cited biblical passages, from Leviticus, Matthew, Exodus, and Revelation, which it said contradicted the asylum seeker’s claims: “These examples are inconsistent with your claim that you converted to Christianity after discovering it is a ‘peaceful’ religion,” the denial letter stated.

Stevens said: “Whatever your views on faith, how can a government official arbitrarily pick bits out of a holy book and then use them to trash someone’s heartfelt reason for coming to a personal decision to follow another faith?”

The Home Office, the British government department responsible for immigration, drugs policy, crime, fire, counter-terrorism, and policing, has said that the refusal letter is “not in accordance with our policy approach to claims based on religious persecution.” It added that “we continue to work closely with key partners … to improve our policy guidance and training provided to asylum decision-makers.”

Sarah Teather, director of Jesuit Refugee Service UK, said March 21 that the refusal letter “is a particularly outrageous example of the reckless and facetious approach of the Home Office to determining life and death asylum cases – they appear willing to distort any aspect of reality in order to turn down a claim.”

“This case demonstrates the shocking illiteracy of Christianity within the Home Office … Here at JRS, we routinely encounter cases where asylum has been refused on spurious grounds.”

She added that “as this instance gains public attention, we need to remember it reflects a systematic problem and a deeper mindset of disbelief within the Home Office, and is not just an anomaly that can be explained away.”

Stephen Evans, CEO of the National Secular Society, commented on Twitter that it was “totally inappropriate” for the Home Office “to play theologian.” He added that “Decisions on the merits of an asylum appeal should be based on an assessment of the facts at hand – and not on the state’s interpretation of any given religion.”

Paul Butler, the Anglican Bishop of Durham, expressed “extreme concern” that the Home Office “could determine the future of another human being based on such a profound misunderstanding of the texts and practices of faith communities … that these comments were made at all suggests that the problem goes deeper than a lack of religious literacy among individual civil servants and indicates that the management structures and ethos of the Home Office, when dealing with cases with a religious dimension, need serious overhaul.”

Stevens has also noted that the refusal letter was part of a larger problem. He quoted in a March 20 tweet from another refusal that stated: “You affirmed in your AIR that Jesus is your saviour, but then claimed that He would not be able to save you from the Iranian regime. It is therefore considered that you have no conviction in your faith and your belief in Jesus is half-hearted.”

Shia Islam is the state religion of Iran, though several religious minorities are recognized and granted freedom of worship. However, conversion from Islam is strictly prohibited.

Open Doors UK said that 114 Christians were arrested in Iran in December 2018. Many of them were reportedly converts from Islam.

The US Commission on International Religious Freedom wrote in its 2018 report that “in the past year, religious freedom in Iran continued to deteriorate … with the government targeting Baha’is and Christian converts in particular.” It said that “Christian converts and house church leaders faced increasingly harsh sentencing: many were sentenced to at least 10 years in prison for their religious activities.”
Posted by Jovan-Marya Weismiller, T.O.Carm. at 22:31