Today is Laetare Sunday, the Fourth Sunday of Lent. In Britain and Ireland, it is known as Mothering Sunday. Originally, it was a day to visit your 'Mother Church', the Church of your baptism, or the Cathedral, the 'Mother Church' of the Diocese. It has become a day on which to honour mothers, similar to Mothers Day in the US.

For those of us whose mothers have passed, it is a day to honour them by praying for their souls.


O God, who hast commanded us to honour our father and our mother; in Thy mercy have pity on the soul of my mother, and forgive her her trespasses; and make me to see her again in the joy of everlasting brightness. Through Christ our Lord. Amen.

Laetare Sunday is also known as "Mothering Sunday" because of the Epistle reading that speaks of how not the Jews, but those who come to Christ, regardless of their ancestry, are the inheritors of Abraham's promise:

Galatians 4:22-31
For it is written that Abraham had two sons: the one by a bondwoman, and the other by a free woman. But he who was of the bondwoman, was born according to the flesh: but he of the free woman, was by promise. Which things are said by an allegory. For these are the two testaments. The one from mount Sina, engendering unto bondage; which is Agar: For Sina is a mountain in Arabia, which hath affinity to that Jerusalem which now is, and is in bondage with her children. But that Jerusalem, which is above, is free: which is our mother. For it is written: Rejoice, thou barren, that bearest not: break forth and cry, thou that travailest not: for many are the children of the desolate, more than of her that hath a husband. Now we, brethren, as Isaac was, are the children of promise. But as then he, that was born according to the flesh, persecuted him that was after the spirit; so also it is now. But what saith the scripture? Cast out the bondwoman and her son; for the son of the bondwoman shall not be heir with the son of the free woman. So then, brethren, we are not the children of the bondwoman, but of the free: by the freedom wherewith Christ has made us free.

The old practice of visiting the cathedral, or "mother church" of the diocese on this day is another reason for the name. In England, natural mothers are honoured today, too, in a manner rather like the American "Mother's Day." Spring bulb flowers (daffodils, for ex.) are given to mothers, and simnel cake is made to celebrate the occasion (this cake has also become an Easter Cake of late, however). The word "simnel" comes from the Latin "simila," a high grade flour:

Preheat oven to 300 degrees F. Grease and flour an 8 inch spring form pan. Line the bottom and sides of pan with greased parchment paper. In a large bowl, cream together the margarine and brown sugar until light and fluffy. Beat in the eggs one at a time. Beat in the flour. Stir in the golden raisins, currants, candied cherries, mixed fruit, lemon zest and mixed spice. Pour 1/2 of batter into prepared pan.

Divide almond paste into 3 equal portions. Roll out 1/3 of the almond paste to an 8 inch circle. Place the circle of almond paste on the cake batter in pan. Cover with remaining cake batter. Bake in the preheated oven for 2 1/2 hours, or until evenly brown and firm to the touch. If the cake is browning too quickly, cover with foil after an hour of baking. Let cool in pan for 10 minutes, then turn out onto a wire rack and cool completely. Set oven to broil. When the cake has cooled, brush the top with warmed apricot jam. Roll out 1/3 of the almond paste into an 8 inch circle and place on top of cake.

Divide the remaining 1/3 of almond paste into 11 pieces and roll into balls. These represent the 12 Apostles minus Judas. Brush the almond paste on top of cake with beaten egg. Arrange the 11 balls around the outside edge on the top of cake. Brush the balls lightly with egg. Place cake under the broiler for 8 to 10 minutes, or until almond paste is golden brown. 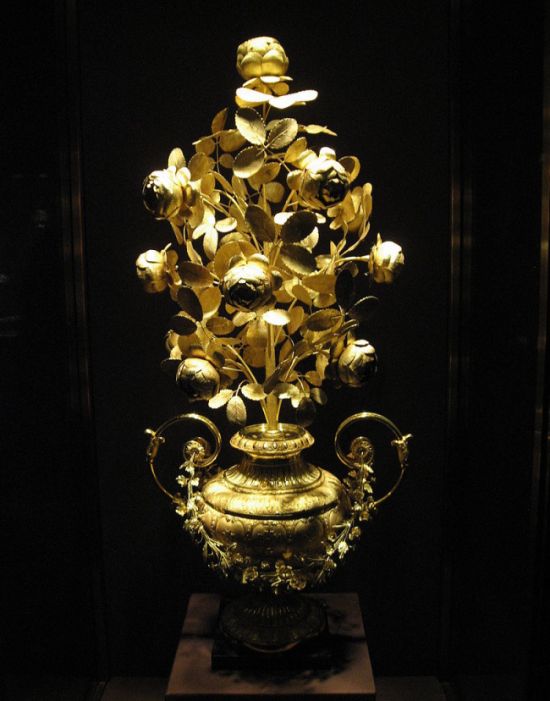 The rose vestments on Laetare Sunday are a custom originating in the fact that, as a symbol of joy and hope in the middle of this sombre Season, popes used to carry a golden rose in their right hand when returning from the celebration of Mass on this day (way back in 1051, Pope Leo IX called this custom an "ancient institution.")

Originally it was natural rose, then a single golden rose of natural size, but since the fifteenth century it has consisted of a cluster or branch of roses wrought of pure gold in brilliant workmanship by famous artists. The popes bless at least one every year, and often confer it upon churches, shrines, cities, or distinguished persons as a token of esteem and paternal affection. (The Golden Rose at right was given to the Shrine at Knock, Ireland)

The golden rose represents Christ in the shining splendor of His majesty, the "flower sprung from the root of Jesse," and it is blessed with these words:


O God! by Whose word and power all things have been created, by Whose will all things are directed, we humbly beseech Thy Majesty, Who art the joy and gladness of all the faithful, that Thou wouldst deign in Thy fatherly love to bless and sanctify this rose, most delightful in odor and appearance, which we this day carry in sign of spiritual joy, in order that the people consecrated by Thee and delivered from the yoke of Babylonian slavery through the favor of Thine only-begotten Son, Who is the glory and exultation of the people of Israel and of that Jerusalem which is our Heavenly mother, may with sincere hearts show forth their joy. Wherefore, O Lord, on this day, when the Church exults in Thy name and manifests her joy by this sign, confer upon us through her true and perfect joy and accepting her devotion of today; do Thou remit sin, strengthen faith, increase piety, protect her in Thy mercy, drive away all things adverse to her and make her ways safe and prosperous, so that Thy Church, as the fruit of good works, may unite in giving forth the perfume of the ointment of that flower sprung from the root of Jesse and which is the mystical flower of the field and lily of the valleys, and remain happy without end in eternal glory together with all the saints.

After the rose is blessed, the Pope incenses musk and balsam and then places them inside the cup of the largest rose. Then the entire rose is incensed and sprinkled with holy water.

Note: you can remember to differentiate between Advent's Gaudete Sunday and Lent's Laetare Sunday -- the two "rose vestment" Sundays -- by remembering that Laetare Sunday comes in Lent, both of which begin with the letter "L."
Posted by Jovan-Marya Weismiller, T.O.Carm. at 16:40