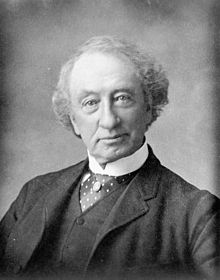 "By adhering to the monarchical principle we avoid one defect inherent in the Constitution of the United States. By the election of the president by a majority and for a short period, he never is the sovereign and chief of the nation. He is never looked up to by the whole people as the head and front of the nation. He is at best but the successful leader of a party. This defect is all the greater on account of the practice of reelection. During his first term of office he is employed in taking steps to secure his own reelection, and for his party a continuance of power. We avoid this by adhering to the monarchical principle--the sovereign whom you respect and love. I believe that it is of the utmost importance to have that principle recognised so that we shall have a sovereign who is placed above the region of party--to whom all parties look up; who is not elevated by the action of one party nor depressed by the action of another; who is the common head and sovereign of all." - Sir John A. MacDonald, speaking in 1865 about the proposals for the upcoming Confederation of Canada
"As for myself, my course is clear. A British subject I was born — a British subject I will die. With my utmost effort, with my latest breath, will I oppose the ‘veiled treason’ which attempts by sordid means and mercenary proffers to lure our people from their allegiance." - Sir John A. MacDonald
"I say that there is a deliberate conspiracy, by force, by fraud, or by both, to force Canada into the American Union." - Sir John A. MacDonald
Posted by Jovan-Marya Weismiller, T.O.Carm. at 17:41