STOP THE BLEEDING: Why Pro-Abort Politicians Must be Expelled from the Catholic Church 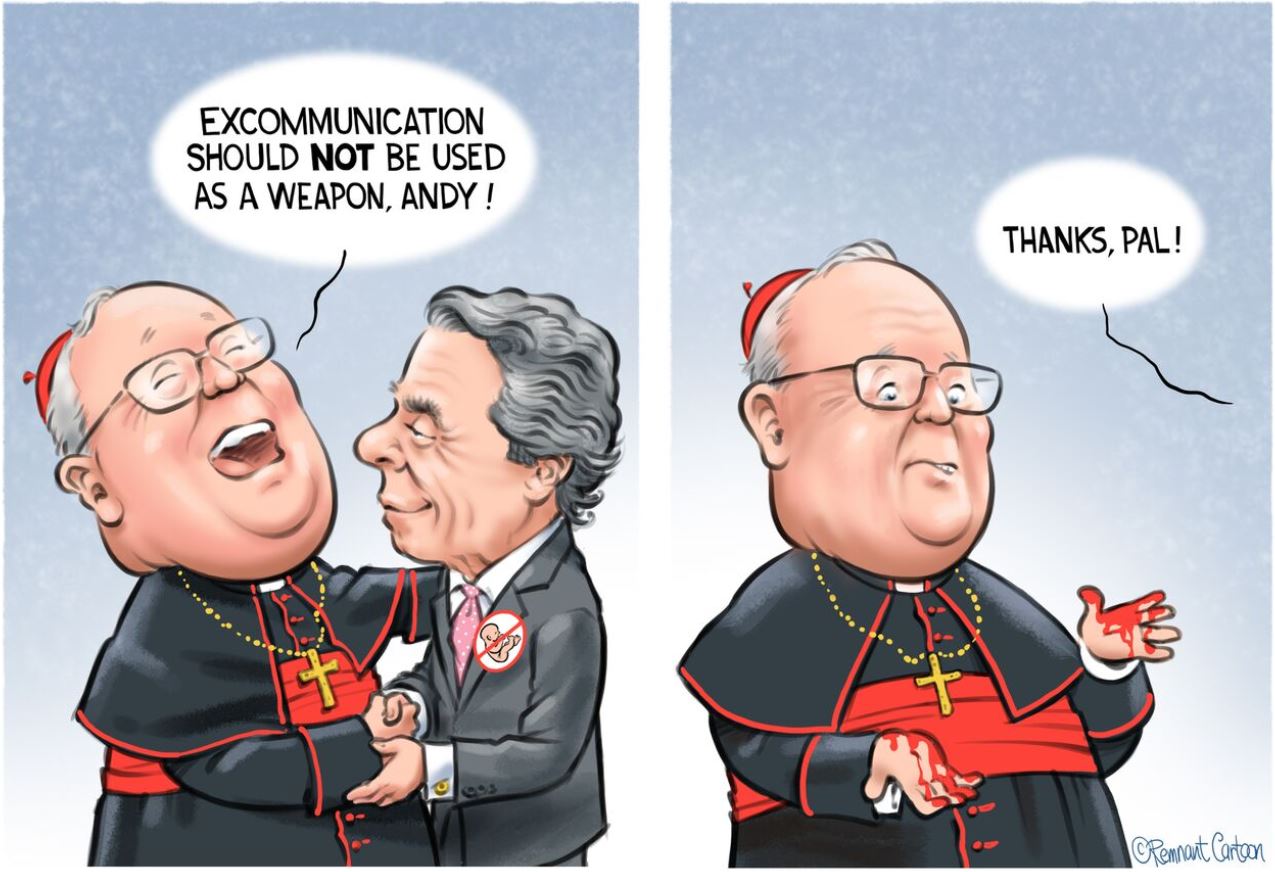 Dystopian novels have been chilling readers to the bone for decades. Orwell's, "Nineteen Eighty-Four", Huxley's "Brave New World", Evelyn Waugh's "Love Among the Ruins".
These classics provide terrifying glimpses of a harsh and colorless world where human beings have been cowed into a state of perpetual shell-shock as their humanity is stripped away by governments exercising ultimate control over life and death.
The plots and characters vary but the stories have a similar feel: haunting, whitewashed halls, emotionless workers in uniform carrying out murder with hypnotic calm, an overwhelming sense of hopelessness as the protagonist finally succumbs to death, or worse—a mind-controlling brainwash.
The reality of 2019 is becoming remarkably similar to the faction of Nineteen Eighty-Four.
In 2019, dystopia is Governor Andrew Cuomo signing an act into law for New York State which allows for the execution of babies on their birthday; upon natural entry into a world which was supposed to treasure, nurture and protect them; which instead waits with open shears to stop their tender, beating hearts.
In 2019, dystopia is Virginia Democrat Kathy Tran proposing state legislature that would not only allow abortion throughout all nine months of pregnancy but also permit a woman to decide whether she wants to “abort” her baby as she's actually dilating and about to give birth:

In 2019, dystopia is Gov. Ralph Northam, Attorney General Mark Herring, and a number of Democrats in the General Assembly backing this sordid legislation.
In 2019, dystopia is a Cardinal of the Catholic Church preferring to sleep with the Left rather than rend his cassock in outraged protest over Godless and inhuman legislation that takes the lives of unbaptized babies. It is his job to call down the wrath of God on those who will not suffer the little ones to even continue to breathe, much less come unto Jesus. The blood of millions of innocents now stains even consecrated hands.
In 2019 and where the unborn are concerned, we have achieved a dystopia beyond Orwell’s wildest dreams.
And while Oceana's most rich and famous bishops are conspicuous by their uselessness, others, in lesser-known outposts around the world, are trying to amplify the silent scream of the unborn:

Statement from the Diocese of Buffalo regarding the Reproductive Health Act: Earlier this week, Bishop Malone added this statement to the NYS Catholic Conference of Bishops, regarding the passage of the Reproductive Health Act: “NYS is already the state with the highest rate of killing pre-born children through abortion. This is a tragic day for NYS that makes a very bad situation even worse. It is a barbaric action of our legislature, and clearly nothing to celebrate."

The Catholic Conference represents the Bishops of New York State. Here's part of their statement from January 22:

"Today, New York State has added a sad chapter to this already solemn date of January 22, the anniversary of Roe v. Wade. With the legislature’s passage, and Governor Cuomo’s signing of the Reproductive Health Act, our beloved state has become a more dangerous one for women and their unborn babies. Many of the state Senators and Assembly Members who voted for this abortion expansion are mothers themselves, who felt their child toss, turn and kick in their womb, and delighted in the progress of their pregnancy. Many others, as well as our governor, are fathers, who held their partner’s hand as they viewed the ultrasound videos, watched their child squirm and rejoiced at the first sound of a heartbeat. Many of these same officials were themselves born into less-than-perfect conditions – poverty, health problems, disabilities, broken families. All overcame these issues to rise to leadership in our state, because their parents chose life for them.

Welcome words indeed, but still not enough. In New York, in Virginia, in Washington, in San Francisco--we are referring to Catholics who are laboring to help millions procure successful abortions, which according to the Code of Canon Law #1398 incurs the penalty of automatic excommunication. The Catholic bishops of America must make this clear and public.
And if some loophole can be cited whereby latae sententiae excommunication is not incurred in the case of Catholic politicians legalizing de facto infanticide, then the bishops must excommunicate them directly in accord with canon law. Why?
For two reasons:
1) to shock these maniacal baby killers into repentance and conversion.
2) to awaken the entire country to the severity of the horrific sin of abortion and to deter more States from following New York's satanic lead.
Paragraph #2272 of the Cathechism of the Catholic Church offers reason why abortion is one of the few sins that carry the penalty of automatic excommunication:

“The Church does not thereby intend to restrict the scope of mercy.  Rather, she makes clear the gravity of the crime committed, the irreparable harm done to the innocent who is put to death, as well as to the parents and the whole of society”

If the U.S. Bishops do not as a body put this country on notice that the penalty for the horrific crime of abortion is expulsion from the Catholic Church, then before God and Man the blood of the innocent is on their hands forever.
“Expel the wicked man from our midst," Excellencies and Eminences. For God's sake, do your job and at least try to stop the bleeding of the unborn!
Because this, after all, is what we're really talking about: