As I say in my siglines on fora, 'Kansan by birth, Albertan by choice, Jayhawk by the Grace of God'! For those who don't know, a Jayhawk is a fan of my alma mater, the University of Kansas.Today is the 158th anniversary of the day Kansas was admitted to the Union, an event that many considered to have triggered the War of the Northern Invasion. HAPPY BIRTHDAY, KANSAS!

The Great Seal of the State of Kansas 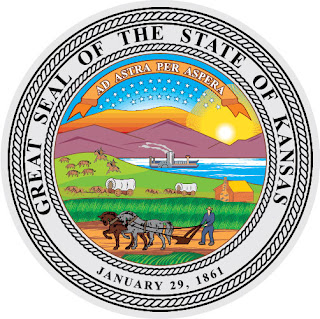 We believe in Kansas institutions; in the Kansas language and in the Kansas ideals in her cleanliness of society, and in her demands that honor, sobriety and respect be maintained in public and private life; in her marvelous productiveness and in her wonderful future.