St Charles and his Companions died a martyr's death rather than being defiled by perversion. Originally published yesterday on the Feast.

Today is the feast of St. Charles Lwanga and companions, murder victims and martyrs of homosexual depravity.
Today we might also contemplate the various ways in which the State is encroaches in our lives in this regard and tries to force us to do things that are repugnant to nature and to God’s laws.
Today we should especially ask God to forgive and convert all those who in any way have contributed to or succumbed to any aspect of what is rightly called toxic “gender theory” and called demonic, due to its origin.
More on that HERE and HERE and HERE.
Today is the feast day of a saint, who died as a martyr especially because he resisted a sodomite king, who was furious that he and many children wouldn’t have homosexual sex with him.
St. Charles Lwanga and many other martyrs died between 1885 and 1887 in Uganda. They were beatified in 1920 and canonized by Pope Paul VI in 1964.
In 1879 the White Fathers were working successfully as missionaries in Uganda.  They were, at first well received by King Mutesa.
Then there came a new pharaoh, as it were.
Mutesa died and his son, Mwanga, took over.  He was a ritual pedophile.
Charles Lwanga, a 25 year old man who was a catechist, forcefully protected boys in his charge from the king’s sodomite advances.
The king had murdered an Anglican Bishop and tried to get his page, who was protected by Joseph Mukasa, later beheaded for his trouble.  On the night of the martyrdom of Joseph Mukasa, Lwanga and other pages sought out the White Fathers for baptism. Some 100 catechumens were baptized.
A few months later, King Mwanga ordered all the pages to be questioned to find out if they were being catechized.  15 Christians 13 and 25 identified themselves.  When the King asked them if they were willing to keep their faith, They answered in unison, “Until death!”
They were bound together and force marched for 2 days to Namugongo where they were to be burned at the stake.  On the way, Matthias Kalemba, one of the eldest boys, exclaimed, “God will rescue me. But you will not see how he does it, because he will take my soul and leave you only my body.”  He was cut to pieces and left him by the road.
When they reached Nanugongo, they were kept tied together for seven days while the executioners prepared the wood for the fire.
On 3 June 1886 (that year the Feast of the Ascension… therefore a Thursday), Charles Lwanga was separated from the others and burned at the stake. The executioners burnt his feet until only the charred stumps remained.  He survived.  His tormentors promised that they would let him go if he renounced his Faith. Charles refused saying, “You are burning me, but it is as if you are pouring water over my body.”  They set him on fire.
As flames engulfed him he said in a loud voice, “Katonda! – My God!”
“Katonda!”  … Better than “Wakanda!”
His companions were also burned together the same day. They prayed and sang hymns.
Charles Lwanga and companions died for their Faith and because they resisted the intrinsically evil of homosexual sex.
It is probable that the African members of the Synod of Bishops coming up this October will be strong defenders of the Church’s teachings and practices against the bizarre innovations which may be proposed by certain other members.
Charles Lwanga, pray for us… pray for Ireland… pray for these United States.
Katonda! 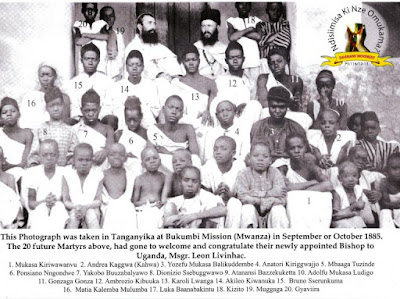 Since today is All Souls' Day, I'm reposting this. From Rorate Cæli Below, you will find our usual post about the plenary indulgence...