He's also one of the apostate false shepherds that supports the Association of US Catholic Priests (AUSCP) which is calling for 'ordaining' women.


June 28, 2019, (LifeSiteNews) – A U.S. bishop has issued a “prayer” card that celebrates homosexual “pride” and includes an image of a crucifix with rainbow colors coming from it. The card, to be distributed this weekend at pro-homosexual events, was released via social media on Friday, the feast day on which Catholics celebrate the Sacred Heart of Jesus.
Pro-homosexual Bishop John Stowe of Lexington, Kentucky, issued the card to commemorate the “celebration of Pride.” The prayer card features a San Damiano Cross on the front, and on the back is a brief letter issued to those who celebrate “Pride.” 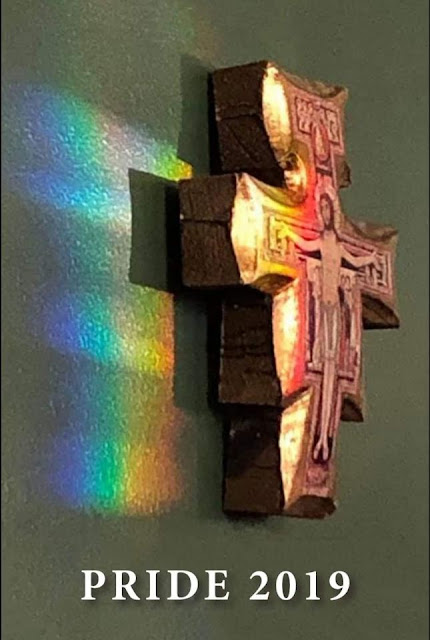 “Dear sisters and Brothers, I greet you warmly and offer you my prayers on your behalf during this celebration of Pride,” wrote Stowe on the back of the card, which includes a rainbow flag with the words “You are God’s beloved” imposed on top of the flag
The remainder of the card suggests that God creates people to be homosexual and transgendered, etc., and that God looks at such “works” as “wonderful.”

Psalm 139, a prayer attributed to King David, celebrates God’s intimate knowledge and deep love of each son and daughter he has made in his image and likeness.
In part, the psalm reads, “you formed my inmost being; you knit me in my mother’s womb.  I praise you, so wonderfully you made me; wonderful are your works!”  (Psalm 139:13-14) New American Bible)
My prayer is that each of us can celebrate that glorious discovery of how we are made and loved by God who knows us intimately and who calls us to a deeper relationship with Himself.
When we acknowledge this in ourselves, we have to be able to see this beauty in each other. There are so many things which can divide us, let’s all come together in the recognition that we are wonderfully made and we are made to reflect the glory of God.
Peace and all good,
Bishop John Stowe, OFM Conv.
Catholic Diocese of Lexington

“With Lexington Pride underway, I am grateful for the presence of people of faith reaching out to those who have been turned away or felt rejected by the Church. Our arms are open to all who seek the Lord with good will!” the bishop commented on Twitter.
Learn more about Bishop Stowe’s views and past actions by visiting FaithfulShepherds.com. Click here.

The Catholic Church teaches that homosexual acts are “intrinsically disordered” since they are “contrary to the natural law” and they “close the sexual act to the gift of life.”
“Under no circumstances can they be approved,” states the Catechism of the Catholic Church (para. 2357).
The Church also teaches that same-sex attraction itself is “objectively disordered” since God created sexual attraction to be between a male and female for the sake of procreation. The Church teaches that God does not make people homosexual.
“Two persons of the same sex sin gravely when they seek venereal pleasure from each other (see Lev 18:22; Lev 20:13; Rom 1:24-28; 1 Cor 6:9-10; 1 Tim 1:10; Jude 7),” states the “Declaration of Truths” recently released by some cardinals and bishops in the Catholic Church.
“Hence, the opinion is contrary to natural law and Divine Revelation that says that, as God the Creator has given to some humans a natural disposition to feel sexual desire for persons of the opposite sex, so also He has given to others a natural disposition to feel sexual desire for persons of the same sex, and that God intends that the latter disposition be acted on in some circumstances,” they add.
The Church teaches that everybody, including those with a disordered sexuality — often expressing itself in lust, masturbation, fornication, pornography, homosexuality — are called to chastity, that is to the moral virtue of a rightly ordered sexuality integrated within the person. The Christian faith holds that homosexual acts, along with murdering the innocent, depriving a laborer of his wages, and oppressing the poor, are one of the four sins that cry to heaven for justice.
Pro-homosexual priest Fr. James Martin promoted the card on social media, noting that the bishop “marks #PrideMonth in his Diocese” by means of the card.
The late Pope Saint John Paul II in 2000 spoke strongly against a pro-homosexual "pride" parade that marched through the streets of Rome, calling it an “offense” to Christian values.
''In the name of the Church of Rome I can only express my deep sadness at the affront to the Great Jubilee of the Year 2000 and the offence to the Christian values of a city that is so dear to the hearts of Catholics throughout the world,'' he told pilgrims in a Sunday July 9 message one day after thousands had marched in the event. The Pope then went on to reaffirm Church teaching on homosexuality, stating that the Church "cannot be silent about the truth, because she would fail in her fidelity to God the Creator and would not help to distinguish good from evil.''
Stowe famously dissents from Church teaching on homosexuality, has a record of collaborating with a group that rejects Catholic moral teaching, and has indicated that individual parishes in his diocese may decide if they want to promote the homosexual cause.
Stowe is one of five bishops who endorsed Fr. James Martin, SJ’s book, “Building a Bridge,” and was also a featured speaker not long ago at a conference for New Ways Ministry. The gathering was titled “Justice and Mercy Shall Kiss: LGBT Catholics in the Age of Pope Francis.”
New Ways Ministry was condemned in 2010 by then-president of the United States Conference of Catholic Bishops (USCCB), Cardinal Francis George of Chicago, and in 2011 by Washington Cardinal Donald Wuerl, USCCB chairman of the Committee on Doctrine. Additionally, in 1999 the Vatican Congregation for the Doctrine of the Faith “permanently prohibited” the group’s co-founders, Sister Jeannine Gramick and Father Robert Nugent, “from any pastoral work involving homosexual persons,” after ruling that their teaching was “erroneous and dangerous” and “doctrinally unacceptable.”
Editor's note: Pete Baklinski contributed to this report.
Posted by Jovan-Marya Weismiller, T.O.Carm. at 23:27