The Witches are Back 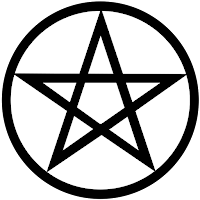 The official United States Department of Veterans Affairs emblem for headstones and markers for the graves of 'witches' and
'warlocks' who have served in the military is to the right . They also have emblems for various other paganisms.

Witchcraft, in its modern feminist occult packaging, seems to be a misguided response to the profound questions that dog our age. It’s the wrong answer to the right question.

Suppose, my dear Chadd, suppose it is we who are the idiots because we are not afraid of devils in the dark? —G.K. Chesterton

The ever-swirling winds of doctrinal fads over the past century have seen millions worshiping at the altars of Marxism, nationalism, theism, atheism and libertinism. But none of these trends are more improbable than the trek of so many in our modern age from secular materialism to wicca and witchcraft.

Witchcraft, which the Catechism of the Catholic Church calls “gravely contrary to the virtue of religion,” has existed for centuries. This resurgence of interest in the occult and witchcraft should, of course, concern Christians, but this modern trend should also concern secular materialists as many are reaching out to this neo-paganism in order to fill a deep need that secular materialism is simply unable to fill. Witchcraft, in its modern feminist occult packaging, seems to be a misguided answer to very profound questions that dog our age. In short, it is the wrong answer to the right questions.

Remember all those “nones” that were discussed by pollsters. It was posited that they showed a lack of any religious fervor. None at all, in fact. But perhaps that doesn't entirely seem to be the case. Perhaps they are simply looking elsewhere. Many people clearly do not believe that science has all the answers or that the material universe is all there is. There is a deep itch in all of us that rejects that claim. Sadly, due to many factors, the last thing many people, especially the young, want to do to fill that hole in their lives is to join the Church. For many of them, the Church is seen at best as outdated, and at worst an enemy of modernism or feminism. I myself am always puzzled when Catholics are accused of being anti-woman, and also of “worshiping” Mary, but logic may not come into it.

Christianity, I don’t know if you've noticed, is pretty unpopular right now for many reasons, some self inflicted. There is a war on Christianity around the globe. In some parts of the globe, the death of Christians is a regular occurrence while in others the persecution takes on other forms such as being silenced in the public sphere, dragged through the courts, or being fined by government agencies.

The media has delighted in portraying Christians as oppressive tools of the patriarchy or violent fundamentalists. The media has been largely successful at demonizing Christians. The irony is that a culture that demonizes Christians, finds itself increasingly turning to demons for answers. In recent weeks, witches have been the subject of several puff pieces by mainstream media organizations.

Earlier this month, The New York Times ran a piece titled “Here’s What Being a Witch Really Means” with a subhead that read, “My grandma Trudy used to tell us that she had ‘healing hands.’ I soon discovered that I did, too.”

The Los Angeles Times also ran a piece titled “The working witches of Los Angeles just want you to be your best self.” So they’re kind of like Oprah? Their piece starts off this way:


The Oracle of Los Angeles was feeling frazzled. It was already 2 p.m. and she hadn’t had time to prepare lunch, much less wipe the ash from her altar. A tarot card client had just left her yellow Craftsman house in West Adams, evidenced by the smell of incense still lingering in the air. Within an hour, she was scheduled to meet with another client who was struggling to complete a Ph.D. thesis. In the meantime, she still had to prepare for her weekly podcast, create a purifying ceremony for a new business – and get her nails done for a reality TV appearance.

If I picked this up at the bookstore and read this as an intro to a book I’d return it to the Young Adult/Fantasy section.

Not to be outdone, Time Magazine, which surprisingly still exists, ran a piece last month titled, “Yes, Witches Are Real. I Know Because I Am One.” You’d think that if the editors at Time Magazine were smart they’d get all those witches to perform a circulation-boosting spell but alas, that might be too great a task even for the Oracle of Los Angeles and Grandma Trudy.

But for the media to embrace witchcraft is nothing new. Washington Post Religion columnist Sally Quinn for years has used Ouija boards, astrological charts and palm reading. She even claims to have been in contact with her husband, the late WaPo executive editor Ben Bradlee, through a medium. Quinn also says in her memoir that throughout her life she has put hexes on multiple people who, in short order, saw their lives destroyed or even ended. Nice lady.

The most interesting thing about her revelations is that for decades she misled people about her religious beliefs as the Religion columnist at the Post but is now comfortable enough to put them out there for all to see. Interestingly, this woman who has been hailed as brave waited until the occult was trending to out herself.

David Brooks of the New York Times pointed out that “according to a 2018 Pew poll, 29% of Americans say they believe in astrology. That’s more than are members of mainline Protestant churches. This surge in belief is primarily among the young. According to a National Science Foundation survey, 44% of 18- to 24-year-olds say that astrology is somewhat or very ‘scientific.’”

One piece in The American Interest declared that Wicca could be considered “the fastest-growing religion in America.”

This is a very serious issue. Souls are surely being lost by their turning away from the God of love to occult powers promising supernatural intervention, wokeness or enlightenment. This is an indictment of our culture as well as the Church. The failings of the Church profoundly impact the world.

Sadly, many inside the Church have responded by attempting to adjust the Church’s teachings to align with modern thought and trends. As the Church looks more like the world, more and more people look past the Church in their search for answers. And they’re making wild leaps to astrology, burned ashes and tarot cards. The very fact that it’s different is what appeals to them. Yet, many still insist that what the Mass needs is more guitars and tambourines. And the Catechism should read like the New York Times editorial page.

Look at this. Recently, a self-styled witch announced that she’s suing Saint Bonaventure University, a Catholic colleges in upstate New York, claiming she was pressured to resign from her post as dean of the communications school because of her Wiccan religion. Pauline Hoffman also claims she was told by Sister Margaret Carney, the then-president of the university, that she “took a big chance hiring you as a Wiccan.” So yeah, it would appear that Ms. Hoffman was known to be a witch when she was hired by this Catholic college. Is that what Catholic parents thought they were getting when they sent their children there?

The offerings of the “just be nice” Church are being soundly rejected. The cafeteria of picking and choosing parts of the Catechism must be closed. This myth that the Church has to become exactly like the world in order to engage the world must be discarded. People know that the world is not all there is — and the more the Church attempts to align itself with the world, the more people make the leap to paganism, witchcraft and the occult.

When all those souls cry out in the darkness, they will not be looking for God. And there should be little doubt that wicked voices will be delighted to respond.
Posted by Jovan-Marya Weismiller, T.O.Carm. at 19:46