The Remnant joins the fight for justice for Israel Folau.

Dear Mr. Matt:
I am writing to inform you about the current controversy concerning Rugby Australia's unjust sacking of their star player, Israel Folau. As you may be aware Rugby Australia terminated his contact because he posted a biblical reference to St Paul “Warning: Drunks, Homosexuals, Adulterers, Liars, Fornicators, Thieves, Atheists, Idolators, Hell Awaits You. Repent! Only Jesus Saves.” Beside the image, he added, “Those that are living in Sin will end up in hell unless you repent. Jesus Christ loves you and is giving you time to turn away from your sin and come to him.”
Folau then quoted Paul’s Letter to the Galatians, 5:19–21, writing, “Now the works of the flesh are manifest, which are these, adultery, fornication, uncleanness, lasciviousness, idolatry, witchcraft, hatred, variance, emulations, wrath, strife, seditions, heresies, Envyings, murders, drunkenness, revelings, and such like: of the which I tell you before, as I have also told you in time past, that they which do such things shall not inherit the kingdom of God.”
Consequently Israel Folau has instigated legal action to redress this unjust termination of his contract with the additional hope of defending religious freedoms in Australia. 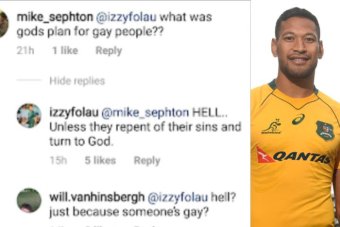 As you may have heard his fundraising efforts for his legal campaign was unjustly removed from GoFundMe and all donations were refunded on the basis of their stated commitment to "diversity and equality". The following day the Australian Christian Lobby readily agreed to assist Falour by offering their website to host his fundraising campaign.
I am writing to ask that The Remnant alert subscribers to the importance of supporting this critical campaign to defend religious freedoms in Australia.
As I'm sure you would appreciate this vital issue will have a great resonance throughout the world in highlighting the critical battle for upholding Christian values.
I have included a link to the Australian Christian Lobby website below, which includes the donation form to support his cause.
https://www.acl.org.au/donate_izzy
UPDATE: I have just seen they have raised over $2 million from over 20,000 donors for Israel Folau and as a result they have pushed pause on their fundraising efforts. They said they will open this up again if needed.
An update is included below:
https://www.acl.org.au/pledge_izzy
I thank you in advance for your time in considering this important matter.
God bless,
Rosalie Hill
Posted by Jovan-Marya Weismiller, T.O.Carm. at 16:51