He was one tough SOB! Survive 'Nam and clandestine ops, only to be killed in a hit and run! Lest we forget!

‘The Giant Killer’, as his comrades-in-arms called him, was the smallest man to serve in the military of the United States.

With a height of only 4 feet 9 inches, and weighing just 97Ibs, he wasn’t even supposed to enter the force.

The Army was his life’s dream, though, and he was determined to make it happen contrary to other people’s opinions.

His story from Military.com 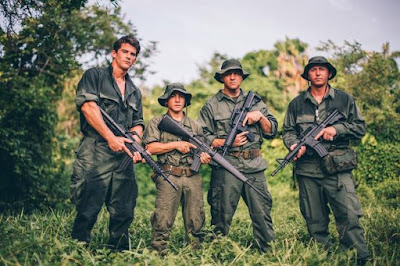 Four-foot, nine-inch tall veteran Richard J. Flaherty claimed to be the shortest man ever to serve in the United States military. He was a Special Forces Green Beret Captain and was awarded the Silver Star, 2 Bronze Stars, and 2 Purple Hearts for his actions in Vietnam. “The Giant Killer” (available to rent now on iTunes, Amazon and other VOD platforms) aims to unravel the truth of his post-service life and mysterious death.

Miami police officer David Yuzuk befriended a homeless man and, after 15 years of friendship, Richard J. Flaherty finally revealed who he really was. Yuzuk learns that this unassuming 69-year-old man was a decorated military veteran.

Yuzuk started digging and discovered that Flaherty had worked undercover with the Feds during the ‘80s. Soon after, Flaherty is killed by a hit-and-run driver. His friend decides to investigate and finds a passport that shows Flaherty was secretly traveling to dangerous locations like Jordan, Iraq, Thailand, Vietnam, and Venezuela while living as a homeless man. He did time in prison for drugs but was that a cover or a real conviction?

“The Giant Killer” is one of those stranger-than-fiction tales that would never make it as a movie pitch because it’s just so unbelievable. Yuzuk is the director and it’s his first movie. It’s not slick but it is fascinating.
Here's another look at his life from Irish Central:
Giant Killer: The incredible mysterious life of the shortest US soldier
Posted by Jovan-Marya Weismiller, T.O.Carm. at 19:18