A Catholic Queen in India -The Story of Begum Samru

Being a retired Old Curmudgeon, I spend a good deal of my day surfing the 'net and watching educational videos on YouTube (OK, I admit it, sometimes I watch clips of cartoon shows!). The other day, in watching a non-cartoon video, I ran across a reference to someone called Begum Samru, mentioned as the only native Catholic Monarch India ever had. Who would have thought that in the late 18th-early 19th century there would be a Catholic ruler in India, excepting, of course, the French and Portuguese Kings? 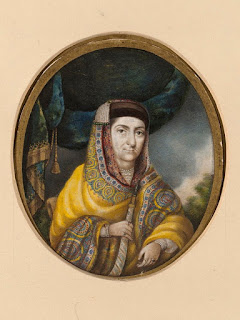 She was born a Muslim under the name Farzana Zeb un-Nissa. Her father died when she was six. She started life as a nautch girl in the court of the Raja of Bharatpur, but when she was 14, she married a Luxembourger named Walter Reinhardt, a mercenary who had begun as a private soldier in the French East India Company. By the time Farzana met him, he was a condottiero, leading a group of mercenary soldiers, offering their service to the petty princelings for use in their wars. Because of his sombre mien, the Europeans of his acquaintance gave him the sobriquet, 'Le Sombre', which later became pronounced by the Indians as 'Samru' or  'Sumru'.

Reinhardt was made Nawab of Agra, but in 1773 he was granted a large jagir (a feudal land grant) by the Mughal Emperor, Shah Alam II, and made the town of Sardhana his capital. Sardhana is in what is now the Indian State of Uttar Pradesh, in the northeast part of India, bordering on Nepal.

When he died, five years later, his wife took command of his 82 European officers, 4,000 sepoys, and the Principality of Sardhana. She was called Begum Samru, begum being the female equivalent of beg or bey, Turkish for a high official.

Just 25, and standing just over 4'3" (1.3 metres), she was a formidable woman. Not only did she rule Sardhana effectively and efficiently, riding horseback, she led her troops into battle in a struggle to hold Sardhana.

A guide book to the history of Sardhana says of her,

“A favourite of the Mughal emperor Shah Alam II, Sumru is said to have saved his life twice and used the might of the sword and the lure of gold to win him supporters and fend off all his rivals. It earned her the titles of Zeb-un-Nisa (jewel amongst women) and Farzand-i-Azizi (most beloved daughter).”

Three years after her husband's death she converted to Catholicism, taking the baptismal name Joanna Nobilis and the surname Sombre from her husband's nickname. This is especially interesting because the English were rapidly becoming overlords of India through the Honourable East India Company, and Catholicism was still oppressed in England despite the Papist Acts in 1778, designed to lessen discrimination. Therefore, it would seem quite clear that this was not a 'conversion of convenience' to curry favour with the dominant power, but a conversion from the heart.

Prior to his death, her husband had expressed a desire to erect a Church in Honour of Our Lord and His Most Blessed Mother. In order to fulfill his wishes, she contracted the services of an Italian architect, Antonio Reghelini from Vicenza. Built in 1822 at the cost of 400,000 rupees, it was modeled on St Peter's in Rome with a touch of Andrea Palladio’s Italian architectural influence. It was dedicated to Our Lady of Graces. It remains a pilgrimage place to this day.
The Basilica of Our Lady of Graces 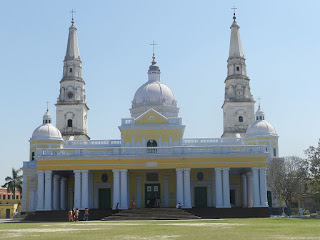 On 13 December 1961, Pope John XXIII granted the Church the title and dignity of a minor basilica. It is one of only 23 minor basilicas in India and the only one in northern India, most of the others being in the south where Christianity was planted by St Thomas the Apostle and strengthened by the Portuguese and French colonisers.

Her Palace in Sardhana is now owned by the
Archdiocese of Agra and used as a school. 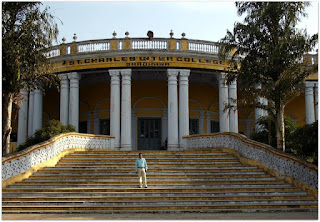 She also built a rather ornate palace for herself, in a suburb of New Delhi, now owned by the Bank of India.
Her Palace in New Delhi, after being
damaged in the Sepoy Rebellion, 1857. 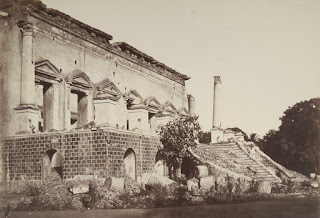 The back of the Palace, restored, as it exists today. 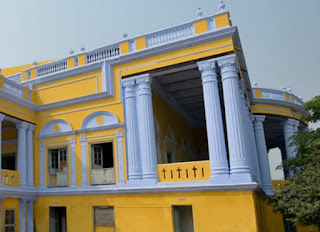 She is buried in the Church which she built. Memory Eternal!
Posted by Jovan-Marya Weismiller, T.O.Carm. at 14:08