There are two novels that can transform a bookish 14-year-old's life: The Lord of the Rings and Atlas Shrugged. One is a childish daydream that can lead to an emotionally stunted, socially crippled adulthood ...in which large chunks of the day are spent inventing ways to make real life more like a fantasy novel. The other is a book about orcs. - Variously attributed to Raj Patel or John Rogers 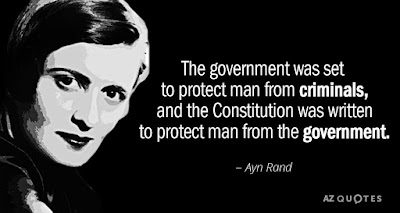 Have to dissent from this one Prager U.  As faithful readers of this blog know, I am decidedly not a fan of the late Miss Rand.  Bill Buckley said why for me long ago:

During his lifetime Buckley functioned as a gatekeeper for the conservative movement.  Get on the wrong side of Buckley and a group on the right could quickly find itself relegated to the fringes of American life.  So it was with Ayn Rand and her Objectivists, a movement whose main tenet seems to have been to shout “Yes Ma’am!” to anything that came from her mouth or pen.  Rand made her reputation and fortune by writing two novels:  The Fountainhead (1943) and Atlas Shrugged (1957).  The poorly written novels, with stick figure characters, were immense financial successes, combining Rand’s anti-collectivist libertarianism with heaping helpings of, for the time, explicit sex, her heroines, always Rand think-a-likes, having multiple lovers but never having kids.  Between the sex Rand specialized in long, bloviating, didactic speeches:

“Did you want to see it used by whining rotters who never rouse themselves to any effort, who do not possess the ability of a filing clerk, but demand the income of a company president, who drift from failure to failure and expect you to pay their bills, who hold their wishing as an equivalent of your work and their need as a higher claim to reward than your effort, who demand that you serve them, who demand that it be the aim of your life to serve them, who demand that your strength be the voiceless, rightless, unpaid, unrewarded slave of their impotence, who proclaim that you are born to serfdom by reason of your genius, while they are born to rule by the grace of incompetence, that yours is only to give, but theirs only to take, that yours is to produce, but theirs to consume, that you are not to be paid, neither in matter nor in spirit, neither by wealth nor by recognition nor by respect nor by gratitude—so that they would ride on your rail and sneer at you and curse you, since they owe you nothing, not even the effort of taking off their hats which you paid for? Would this be what you wanted? Would you feel proud of it?”

Several years ago, Miss Ayn Rand wrote The Fountainhead. Despite a generally poor press, it is said to have sold some four hundred thousand copies. Thus, it became a wonder of the book trade of a kind that publishers dream about after taxes. So Atlas Shrugged had a first printing of one hundred thousand copies. It appears to be slowly climbing the best-seller lists.

The news about this book seems to me to be that any ordinarily sensible head could not possibly take it seriously, and that, apparently, a good many do. Somebody has called it: “Excruciatingly awful.” I find it a remarkably silly book. It is certainly a bumptious one. Its story is preposterous. It reports the final stages of a final conflict (locale: chiefly the United States, some indefinite years hence) between the harried ranks of free enterprise and the “looters.” These are proponents of proscriptive taxes, government ownership, labor, etc., etc. The mischief here is that the author, dodging into fiction, nevertheless counts on your reading it as political reality. This,” she is saying in effect, “is how things really are. These are the real issues, the real sides. Only your blindness keeps you from seeing it, which, happily, I have come to rescue you from.”

Since a great many of us dislike much that Miss Rand dislikes, quite as heartily as she does, many incline to take her at her word. It is the more persuasive, in some quarters, because the author deals wholly in the blackest blacks and the whitest whites. In this fiction everything, everybody, is either all good or all bad, without any of those intermediate shades which, in life, complicate reality and perplex the eye that seeks to probe it truly. This kind of simplifying pattern, of course, gives charm to most primitive story known as: The War between the Children of Light and the Children of Darkness. In modern dress, it is a class war. Both sides to it are caricatures.

The Children of Light are largely operatic caricatures. Insofar as any of them suggests anything known to the business community, they resemble the occasional curmudgeon millionaire, tales about whose outrageously crude and shrewd eccentricities sometimes provide the lighter moments in boardrooms. Otherwise, the Children of Light are geniuses. One of them is named (the only smile you see will be your own): Francisco Domingo Carlos Andres Sebastian dAntonio. This electrifying youth is the world’s biggest copper tycoon. Another, no less electrifying, is named: Ragnar Danesjold. He becomes a twentieth-century pirate. All Miss Rand’s chief heroes are also breathtakingly beautiful. So is her heroine (she is rather fetchingly vice president in charge of management of a transcontinental railroad).

So much radiant energy might seem to serve a eugenic purpose. For, in this story as in Mark Twain’s, “all the knights marry the princess”–though without benefit of clergy. Yet from the impromptu and surprisingly gymnastic matings of the heroine and three of the heroes, no children–it suddenly strikes you–ever result. The possibility is never entertained. And, indeed, the strenuously sterile world of Atlas Shrugged is scarcely a place for children. You speculate that, in life, children probably irk the author and may make her uneasy. How could it be otherwise when she admiringly names a banker character (by what seems to me a humorless master-stroke): Midas Mulligan? You may fool some adults; you can’t fool little boys and girls with such stuff–not for long. They may not know just what is out of line, but they stir uneasily. The Children of Darkness are caricatures, too; and they are really oozy. But at least they are caricatures of something identifiable. Their archetypes are Left-Liberals, New Dealers, Welfare Statists, One Worlders, or, at any rate, such ogreish semblances of these as may stalk the nightmares of those who think little about people as people, but tend to think a great deal in labels and effigies. (And neither Right nor Left, be it noted in passing, has a monopoly of such dreamers, though the horrors in their nightmares wear radically different masks and labels.)

Go here to read the devastating rest.  Well, after this it was open war between Rand and National Review.  Rand would spend the remainder of her life surrounded by an adoring cult, but effectively exiled from the mainstream conservative movement.  Her books continue to sell quite well, which would have pleased Rand and not surprised Chambers who never underestimated the ability of trash to do well in the market.

A typical Randian speech was delivered by Gary Cooper as Howard Rourke in the film The Fountainhead (1949).  Rand insisted on the speech.  Gary Cooper, a conservative Republican, found it difficult to deliver the speech with a straight face as he noted that parts of the speech were hard to understand and other parts were just crazy.

I have always treasured the Simpson’s take on the philosophy of Rand:

I will say this for the followers of Miss Rand. In a world ruled by them I doubt if dissent would be crushed and freedom banished as this would be in defiance of Miss Rand’s philosophy, and this places them in a different moral category from the contemporary Left.
Posted by Jovan-Marya Weismiller, T.O.Carm. at 18:50