From yesterday. Steve Skojec takes a look at the COVID-19 news, including a Priest thanking a nightclub for a pro-porn/fornication message.

Well, the world has had its eyes fixed on the coronavirus pandemic and all things related for yet another week. But there are some other stories of note — not all directly virus related — that have come out over the past few days, and I wanted to bring them to your attention.
Meat in Lent Because of Coronavirus?
Bishop James Checchio of the diocese of Metuchen, New Jersey, has granted a dispensation from Friday abstinence in Lent to his flock (except on Good Friday) because things are just too hard already, or something.
“Given the difficulties,” he said, “of obtaining some types of food and the many other sacrifices which we are suddenly experiencing given the coronavirus” he was granting the dispensation for the rest of Lent.
The Boston Archdiocese has now apparently done the same. (Others will no doubt follow suit.)
Now, to the best of my knowledge, he has power to grant this dispensation, and there may actually be some cases where people who are forced to shelter in place have to eat whatever they have in the cupboard or the freezer. But why not grant it to those who find themselves in that situation, rather than to everyone sitting on piles of toilet paper and Dinty Moore, watching Netflix?
I’ve been supportive of the suspension of the kind of gatherings that happen at public Masses to stop the spread of this virus, but not the abolition of confessions, baptisms, last rites, and so on. A reader wrote to me this week very concerned that someone going in for emergency surgery couldn’t get last rites from their parish priest because he said he wasn’t allowed. Someone else told me a priest gave them the same excuse for not hearing their confession.
The more you see what’s left of Catholic life evaporate, the more I can’t help but wonder how much is going to be left when we come out the other side of this thing.
Italian Traditionalist Priest Tells Us to Stop “Whining Like Capricious Babies”
A reader sent me a video yesterday from an Italian priest who is fed up. The reader writes:

He gives us a kick in the pants like only an Italian can, regarding the gnashing of teeth over there being no public masses. It’s so good that I had to translate it and put subtitles and reupload it to Youtube. Don Alberto Secci has the cred to admonish us. He has a parish in a remote valley of the Italian Alps. He and another nearby priest, Don Stefano, decided in 2007 to quit the Novus Ordo cold turkey. The bishop suspended them both, but they (and their flock) held out, and eventually they were restored. Thus they offer the TLM only to this day. They are great, and I miss them.

In the video, Father Secci admonishes the faithful who are extremely upset about the current suspension of Masses to remember Our Lord abandoned on the cross. “Now is the moment,” he says, “in which we have been asked to live this, without whining like capricious babies.”
He says that the priests have not abandoned the faithful. They continue to offer Masses which are efficacious on our behalf, and to remember that the idea that the Mass only has merit when a congregation is physically present is one of the errors we have striven to combat since the council. He also urges the faithful to stop complaining and do good works.
The video is only 5 minutes, and worth watching in full:

Pope Francis Condemns Idolatry. Unironically.
At his Mass yesterday morning, Pope Francis asked the question: “What are my idols? Everyone has their own. What are my idols? Where do I hide them? May the Lord not find us at the end of our life, and say: ‘You are perverted. You have strayed from my path. You prostrated yourself before an idol.'”
And yet no Pachamamas were mentioned during the course of his homily.
The Priest Head of Austrian Caritas Thanks U4 Nightclub for Pro-Porn/Fornication Message
Alexander Tschugguel, who has been sick for weeks with coronavirus, must be feeling a little better today. He caught something unbelievable and tweeted it out:

38 people are talking about this
Caritas, as you may already know, is “is a confederation of 165 Catholic relief, development and social service organizations operating in over 200 countries and territories worldwide.”
It is run by the Vatican. The past head was the infamous Cardinal Maradiaga. The current head is the not-quite-as-infamous Cardinal Tagle. (With the help of the Lepanto Institute’s Michael Hichborn, we’ve told you before about some of the dirty dealings of Caritas. It’s an organization that leaves yet another black mark on the Church.)
Michael Landau, the man mentioned in Alexander’s tweet, is the President of Caritas Austria. According to his bio at caritas-wien.at, he is “a biochemist, Catholic priest and president of Caritas Austria.”
The tweet Alexander called him out for is this one: 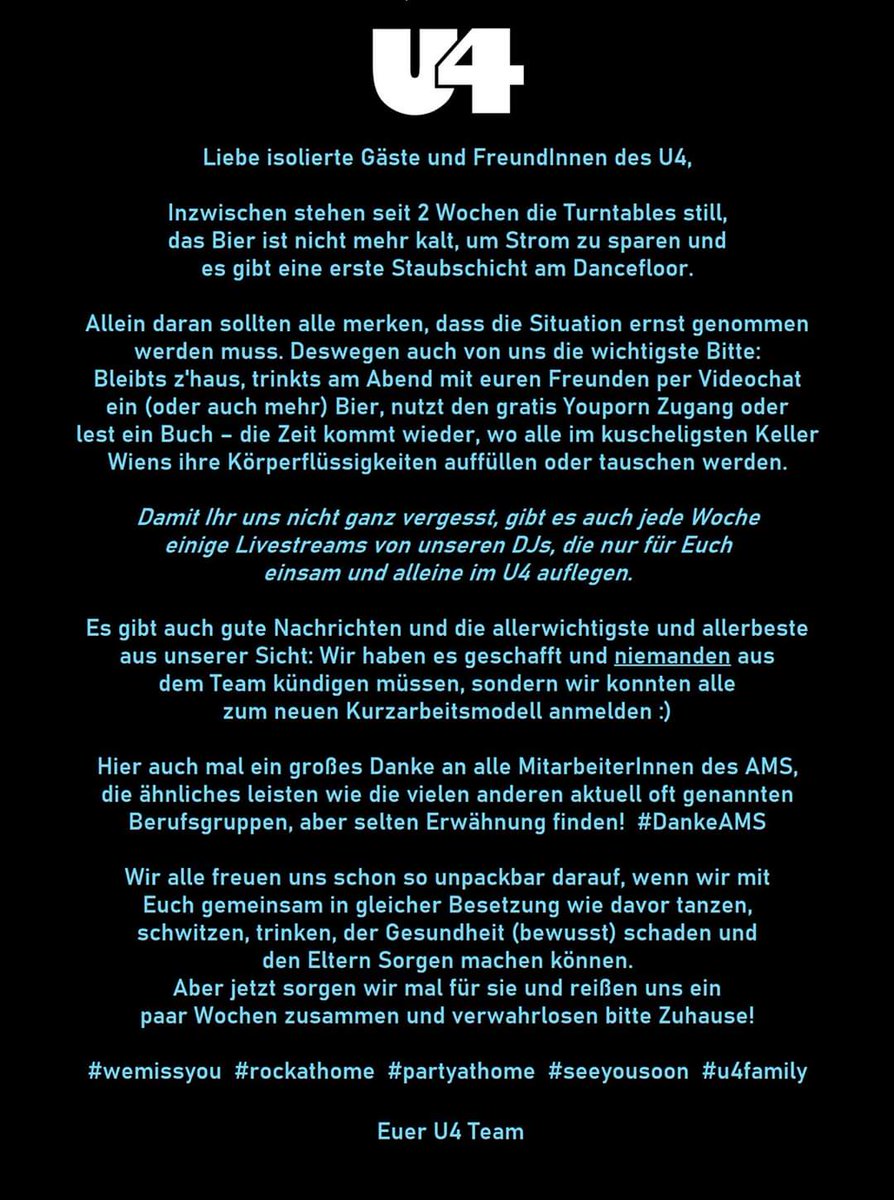 See Michael Landau's other Tweets
In it, Landau thanks Johannes Kopf of AMS Austria and the U4 nightclub for a raunchy message on what people can do when staying home during the coronavirus shutdown. According to a Facebook machine translation of the U4 message, this is what it says:

Dear isolated guests and friends of the U4

It goes on from there, but that’s the salient bit.
Alexander asks Cardinal Schonborn to “do something about it,” but considering what Schonborn allows in his own cathedral, we’re not holding our breath.
Catholic Relief Services and Abortion
And speaking of Michael Hichborn and the Lepanto Institute, this week they released a third video in their series connecting Catholic Relief Services to the promotion of contraception, abortion, homosexuality, and even a referral network in Africa that includes abortion organizations. His latest installment can be viewed right here:

Michael has been working hard for a long time uncovering the decidedly non-Catholic activity of Catholic Relief Services, and it’s a shame that his reports coincided with the pandemic, or they’d almost certainly have gotten more attention.
Nobody works harder to provide more research and documentary evidence of the corruption of Catholic orgs like CRS than Michael, so if you want the straight scoop on the seemingly never ending scandals these organizations are producing, go to The Lepanto Institute website for the full story.
That’s it for today. Stay safe this weekend, everyone. Remember that the list of livestreamed Masses keeps growing, so go to New Liturgical Movement or the new site, LatinMass.live for the latest.
If you’d like to stream Mass from my personal favorite, the Canons Regular of the New Jerusalem — these are the priests who offer monthly Masses for 1P5 Benefactors — you can do that directly from their Facebook page.


Please remember that these priests and their religious institutes/orders/congregations that are streaming Mass have to support themselves, pay for camera equipment and microphones, bandwidth for streaming, and so on. So if you have the ability to donate in support of their efforts, please do!
Posted by Jovan-Marya Weismiller, T.O.Carm. at 18:07