Good on the Poles! They stood at the Gates of Vienna against the jihad. Now they stand against the invasion of filth! Our Lady of Częstochowa, Queen of Poland, pray for Your land and its people! 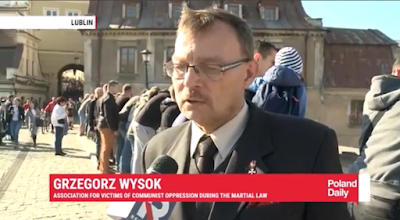 Thousands of Polish Catholic patriots turned out today to counter-protest a few hundred "LGBT" activists in the city of Lublin, who were parading in a so-called "equality" march. Pray that next year the city, and indeed all of Poland, will not permit that which has no right to propaganda.

Pray that this spirit of resistance to those who wish to destroy the family, will spread to the decadent "West", where the "LGBT" so-called "gay liberation" movement is protected by the State and allowed to pour its propaganda and poison into the souls of innocent children.

Readers will be especially pleased to know that real Catholic priests were actually involved in the counter-protests, inspiring and encouraging the lay faithful to defend Christian civilization.

Please pray for Poland, and your country of origin.